The US Airways Flight 1549 Election (You're perfectly right)

It's odd, considering the amount of time people spend on airplanes (especially pop stars), that there are not more songs written on the subject of flight. Most of them suck but there are a few good ones which I'll list in no particular order:

But probably the best is Colin Blunstone's meditation on the stark reality of air travel titled "This is Your Captain Calling" (and, of course, it's about a lot more than just air travel).


The song speaks to the feeling of absolute helplessness air travelers experience when they're strapped into their seats and being piloted by an insane captain who's asking for their help to land the plane - or worse, telling them to brace for impact into a sky scraper or remote rural patch of dirt. The sort of thing one contemplates on 9/11 or when reading "The Flight 93 Election" an essay that's been roiling the "conservative" websphere for the past week with its stark indictment of #NeverTrump specifically and the conservative movement generally. I'm not going to cherry pick a bunch of paragraphs from the piece and comment because the whole thing should be read in its entirety = it really does make a powerful and unified argument but there is one paragraph that hits the bulls-eye:


"Let’s be very blunt here: if you genuinely think things can go on with no fundamental change needed, then you have implicitly admitted that conservatism is wrong. Wrong philosophically, wrong on human nature, wrong on the nature of politics, and wrong in its policy prescriptions. Because, first, few of those prescriptions are in force today. Second, of the ones that are, the left is busy undoing them, often with conservative assistance. And, third, the whole trend of the West is ever-leftward, ever further away from what we all understand as conservatism."

This is a point the KOTCB blog has been making repeatedly over the past 18 months:


No one reads the Keeper of the Clown Bell, but everyone reads the CRB and boy are they pissed.
I could keep on posting negative reviews and you can read them if you like, but you won't find one that challenges the "blunt" statement I pulled from the article above. The pundit that gets closest to the truth is Jonah Goldberg who torpedoes the premise of the article like this:


It’s also not true. Truth would exonerate him. But it isn’t true — and even if it were, he can’t possibly know that it is. I am the first to concede that if Hillary Clinton wins it will likely be terrible for the country. But America is larger than one election for one office in one branch in one of our many layers of government. Indeed, if it’s true that America is one election away from death, then America is already dead. Because the whole idea of this country is that most of life exists outside of the scope of government. Yes, this idea is battered and bloodied. But I fail to see how rejecting the idea — as Publius does — is the best way to save it.

And this, dear reader, is the fundamental disconnect that the Alt-Right is illuminating for the conservative pundit class. America is already dead if "the whole idea of this country is that most of life exists outside of the scope of government" because this idea is not just "battered and bloodied" - it's none existent. The left certainly doesn't recognize this "idea" as legitimate and, when you get right down to the "blunt" reality of our politics, the right (NatReview, WSJ, etc.), while recognizing it, can hardly make it out and doesn't believe what it sees as legitimate either. "Even if it were" true - "it's also not true."

What, for the love of God, "exists outside the scope of government" in the USA circa 2016? A subject of the administrative state can't wipe his ass without government being involved in every aspect of the act - controlling the food supply, taxing the food, taxing (and regulating) the toilet and the toilet paper, rationing the water, processing the waist and recycling the gray water, even telling you who you have to share the bathroom with. This has all happened with the help of the conservative movement who play to lose with honor, but lose all the same. And by this point they will even admit that they've lost - admit the concept into their mind - but they can not or will not believe it. There is a big difference between admitting something and believing something and in that opaque journey is a flight path to sanity. 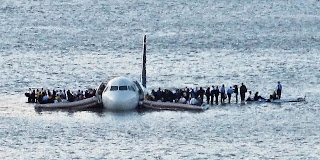 This is not the flight 93 election because the plane is not flying a normal cross country trek and being commandeered by a malicious band of outsiders hell bend on national destruction. The 2016 contest was going to be an inside job pitting "progressive" HRC against "constitutional conservative" JEB! but something unexpected happened shortly after takeoff that's put everyone involved - the pilots, the stewards, the passengers, air traffic control and federal regulators - in a very uncomfortable spot. This is a flight 1549 election - The US Airlines flight out of LGA that hit a flock of geese and blew out both engines forcing captain "Sully" Sullenberger to ditch it in the Hudson river. This jet plane is going down folks so are we going to try and glide it back to the airport or find a pilot who can pull off a water landing so that most of us can survive? We're not talking about saving "conservatism" at this point, we're focused on saving our lives and reforming our country into something We the People can live with, be it "constitutional conservatism" or not.