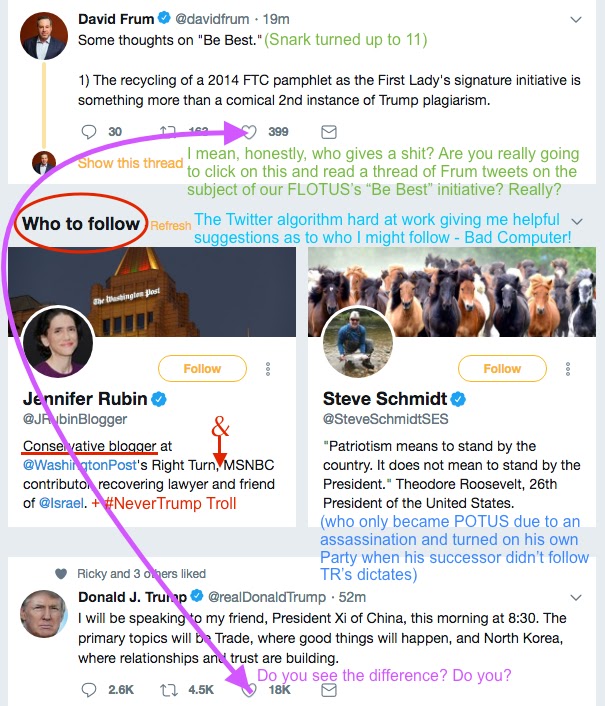 KOTCB readers know how I feel about the Twitter Wall and DJT's Trebuchet which he uses to rip gaping holes in this mental fortification. Today I was scrolling the wall looking for news and commentary on the Iranian Nuke deal and saw this mess (which I have taken the liberty of annotating) fill my screen. I do follow David Frum (for laughs see KOTCB Frum-Frum) and the idiots at Twitter have created an algorithm that suggests I also follow @JRubinBlogger and @SteveSchmidtSES too, so let's take a look at what these deep thinkers have to say before I commit to taking the bate.

Actually, the fight these helpless and disgusted Americans are waging is with the President of the United States and the institutions he leads (the Executive) or works with (Congress and Judicial branches) but Steve is right that no one is asking anyone to die over it. Good thing too (for Steve) because there's not a snowball's chance in hell that he'd risk his hide (meaning risk death) to defend whatever it is he believes in which, as far as I can tell, is nothing (unless you count words).

No thanks Twitter. I think I'll pass on your recommendations. I already follow someone who really shakes things up and seems to understand how to use your medium better than most. Look what he did to the Silver Spooned Surfer and his Iranian subterfuge in under 128 characters.

John Kerry can’t get over the fact that he had his chance and blew it! Stay away from negotiations John, you are hurting your country!
— Donald J. Trump (@realDonaldTrump) May 8, 2018

That was this morning. Foreshadowing?
Mid day I was asked what I thought Trump would do on the Iranian Nuclear deal by a trader who's long on crude. I was happy to give him my thoughts because, what the hell, I'm not a mind reader but...

"I think he’s going to pull out of the deal and open up a vacuum that will suck down a lot of bad-faith actors. Much of what DJT is doing on the Korean peninsula is targeted at Iran and I think it’s working but staying in the Iranian Nuke deal runs counter to his long term goal of preventing nuclear escalation in the Middle East. As a practical matter, nuclear proliferation is an impossible problem and if more than a handful of countries have them the chances of a detonation (even an accidental one) go up exponentially. Can’t have it - not an option. I always thought that Iran Nuke deal was just a long term set up to justify war with Iran anyway (which I don’t want to see happen) so getting rid of it will pull the rug from under the military/industrial complex and remove at least one pretext for war. Besides, Iran is Russia’s problem just like NK is China’s problem - Trump needs to work with Putin to solve it which is why the Deep State creeps spun up this Russian collusion narrative right after the election to prevent a Trump/Putin alliance - The powers that be in DC want War, not peace and they’ll do anything they can to disrupt harmony and good will. So the Iranian Deal has to go - one more nail in the coffin that holds Obama’s legacy and by casting off the old agreements the door opens for something new and better."

Pushback: Our allies don't support him. The US can't go it alone. Everybody's long crude.

"Unilateral US sanctions will not hurt US companies because the Iran Nuke deal was always better for EU firms in the first place - there was nothing in it for America from the start (one of Trump’s biggest objections to the deal). Besides, US firms will just use shell companies to do business with Iran like they’ve been doing for 40 years. Trump pulled out of the Climate Accord last year and everyone else stayed in - that’s been great for America and the rest of the world can go piss up it’s own leg. California alone has a larger GDP than France https://www.reuters.com/article/us-california-economy-idUSKCN0Z32K2 and if the price of crude goes up than that’s MAGA too https://www.reuters.com/article/us-energy-iea/u-s-to-overtake-russia-as-top-oil-producer-by-2019-at-latest-iea-idUSKCN1GB0C6 so I see no reason why Trump would stay in the deal. Most importantly, for the Trump brand, staying in the deal, after railing against it for two years and calling it “the worst deal I’ve ever seen”, is a circle that can’t be squared. He almost has to pull out regardless of the fall out. Gird your loins - I might be wrong, but it’s going to shake up the markets either way."

At about 2:15 PM ET my friend thanked me via email and I hope he makes a killing on those oil futures. One thing is clear - don't hedge by hoping that Donald Trump will go back on his word.