The End of Solution Sales


Harvard Business Review (HBR) called out the Democrats problem in 2012 in a paper called "The End of Solution Sales" and everyone who read it should have seen the Trump Train coming down the tracks."The old playbook no longer works. Star salespeople now seek to upend the customer’s current approach to doing business." The "old playbook" is called Solution Selling and it's been the playbook in business and government (same thing) for decades - here's how it works:

"Under the conventional solution-selling method that has prevailed since the 1980s, salespeople are trained to align a solution with an acknowledged customer need and demonstrate why it is better than the competition’s. This translates into a very practical approach: A rep begins by identifying customers who recognize a problem that the supplier can solve, and gives priority to those who are ready to act. Then, by asking questions, she surfaces a “hook” that enables her to attach her company’s solution to that problem. Part and parcel of this approach is her ability to find and nurture somebody within the customer organization—an advocate, or coach—who can help her navigate the company and drive the deal to completion."

Example: I'm With Her

The HBR points out that top performers forgo the Solution Sales methodology which targets "Talkers" (Climber, Friend and Guide) and implement a strategy called The Challenger Sale which is complex but pays off Bigly for those winners who can execute. A key to success for the "Challenger" is finding the right allies which are called "Mobilizers" in this report and constitute broad personality types delineated as the Go-Getter, Skeptic and Teacher. "Star performers are far more likely to be Challengers than any other type. Why? Challengers are the debaters on the sales team. They’ve got a provocative point of view that can upend a customer’s current practices, and they’re not afraid to push customers outside their comfort zone." There are many benefits to the Challenger approach - chief among them is that "It forces sales and marketing to finally come together and it's impossible to succeed unless they do."

Aligning sales and marketing is the name of the game in politics and nothing unites these two fractious disciplines quite like a Challenger sales pro who FORCES the ninnies in the marketing dept. to speak to the needs of the customer instead of their products capabilities. A really, really good sales guy will actually change the product (if necessary) and trash all that fluff the marketing group has been working on for month or years which is something they hate to do but must because it's the salesman who closes and brings home the check. Other benefits are that "it drives strategic demand generation of the right opportunities" (not easy) and "it creates a focus on value as defined by the customer" (near impossible). But that's not all because there's something more - something much bigger - "The biggest benefit of The Challenger Sale model is that it creates pipeline."

Pipeline. More opportunities for more salespeople to swoop in and close deals based on the new mind-set the Challenger has created.

All year long there has been a great deal of speculation about a "Blue Wave" that should be breaking across the fruited plain on November 6th and quite a lot of fear (in some circles) about what might happen if that wave fails to materialize. Anxiety and trepidation fills the soul of both political parties as E-Day draws near and cold hard truths will be revealed. Speaking for myself I have no concern about this election whatsoever because I already know that a Red Wave is coming and the GOP will be gaining seats in the Senate and, very probably, the House because I understand the 80/20 rule of US Elections. The country is run by 21% of the electorate while another 19% works diligently to prevent that 21% from wiping them off the political map. The other 60% are comprised of 2 groups - 1. 30% are children, the insane or criminals and 2. 30% are shiftless layabouts or self sufficient survivors who couldn't care less who runs this country (they'd be fine living in Venezuela or Uzbekistan). So it all comes down to 1 in every 5 people and how they remember their history, perceive the present and, especially, dream about the future. If you drill down on the 40% of citizens who actually bother to vote the 80/20 Rule shows up in an even more profound way because any polling results will show that 80% of those voters already knew how they would be voting in 2018 the day after the 2016 election - they're either a Jack-Ass or a Pachyderm and it really doesn't matter what their team does in the real world because every two years their back pulling the lever for the Democrat or Republican on the ticket (name, record, philosophy, etc. doesn't matter). So the real deciders of any election are that 20% of the voters - that is to say, people who actually vote - who call themselves "undecided" and don't know how to make up their mind. These are the voters who need to be sold and, as election day approaches, need to be closed. So I ask you dear reader, who is the best political closer in the land? 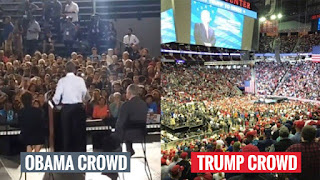 This is shaping up like a replay of 2016 but in a way that will completely devastate the Globalist Left and leave the Democrat party in shambles. The Dems pulled their closer out of the bull pen and sent him to a high school in Las Vegas to speak to a few thousand people but he'll never win the deal because he lost his mojo back in 2010. The GOP has the Babe Ruth of politics - A guy who can pitch and hit with devastating skill and effectiveness (and play football) who will be spending the next two weeks closing - and man, can this guy close! Think about it - who are the 20% going to support when it comes time to decide?