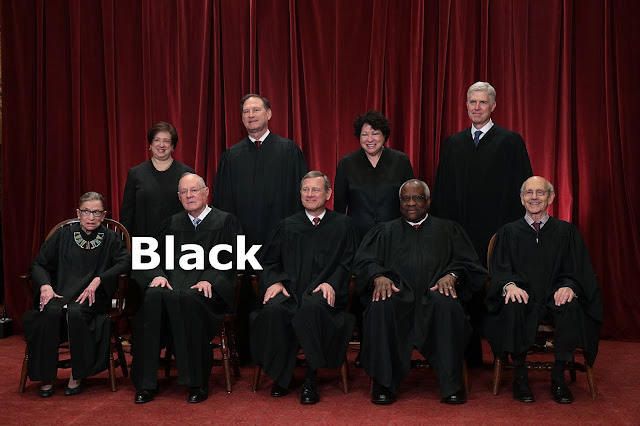 The Kennedy seat - what should be known properly as “The Black Seat” is the most contentious chair on the SCOTUS. It was held by Hugo Black - a staunch FDR New Dealer from the Solid South and it has been THE swing seat from 1937 to the present. Black was succeeded by infamous squish Lewis Powell and when Reagan tried to right the ship in his second term all hell broke loose - first Bork and then Ginsberg (not RGB but Douglas) who was denied the chair because, get this, he had puffed marijuana a few times in his youth which eventually landed Justice Kennedy in the spot which Bork or Ginsberg should have taken. Bork would have been a highly entertaining Supreme Court Justice and it’s really a shame that he didn’t get put on the bench but the court is highly political and the Deep State pulled out all the stops to prevent his ascendancy. Ginsberg was a different story - it came down to religion and the fact that there is a glass ceiling on Jewish justices and the left wasn’t going to let Reagan put one of “his” on the court. Clarence Thomas experienced the same resistance for the same reason (only space for 1 black justice) but powered his way onto the court. Right now there are 3 Jewish justices who arguably represent the varying political sentiments of most (80%) Jewish people in the USA. Rome is also overrepresented on the court but the political philosophy of our Catholic Justices does not map to the broader Catholic population (thank God) meaning that the Nancy Pelosi’s of our country have only a single “wise Latina” to state their case which she doesn’t do very well.

The fact that the SCOTUS appointments are so contentious points to a breakdown in civic order and representative democracy - many of the issues that SCOTUS is now asked hand down ruling on are problems that should be handled in the legislative branch of government. Or they are made up controversies achieved by simply refusing to read the text of the constitution or established statutes - a perfect example was the recent case Trump v. Hawaii that sought to deny the POTUS the right to prevent immigration to the USA based on national security assessments and well established risks. How could such a ludicrous case work its way all the way up the chain to the SCOTUS and then result in a 5-4 split decision?!!! This is not “law” as traditionally understood - this is pure mysticism where 4 justices on the Supreme Court of the United States of America are just making shit up to justify an insane and very dangerous precedent that would prevent the Executive from exercising Constitutional powers. The 4 “liberal” justices literally ignored the plain language of the US Constitution and pertinent laws or statutes passed by Congress because of… What? Bigotry? Shit Trump said at a campaign rally in 2015? Read Sonia’s dissent and you’ll get the full picture of just how raw and political this “justice” really is (and not too bright to boot).

Kavanaugh was a good choice for the "Black" seat and a confirmation before October was inevitable - this was to be a back breaker for the Dems and set up a right-wing SCOTUS for decades. It was a great choice for a couple of reasons but smartest among them was to pull a DC Insider and Bush approved judge who carries a long knife for the Administrative State. Coach K knows all the inside the beltway people - has been doing it for years - and Trump was tossing a bone to the Bush syndicate who are still smarting from the primaries. If you think I’m happy about having another Bushie on the SCOTUS you’re wrong but I figured that once Kavenaugh was on the court the political fight would be over - Liberals lose. RGB and Breyer (both octogenarians) can retire, as they almost certainly will, without tipping the “balance” of a court that is already keeling to the right. Trump might get 2 more appointments before the end of his first term - especially if the GOP cleans up this November.


Not so fast America. When it comes to a down and dirty Deep State Swamp fight you're about to see a Holton-Arms vs. Georgetown Prep grudge match and you just can't get any more "inside the beltway" than that. It's a forgone conclusion that The Sisterhood supports their girl while All the Young Dudes have the guys back but what's really driving this, like almost everything that happens in politics, is high school and (in this case) the caldron of mischief bubbling from the stew of elite private education in Washington, DC. With ingredients from  Sidwell Friends, Landon, National Cathedral, St. Albans and, of course, Holton and Gtown Prep these kids are burning down the house from Foxhall Road to Rock Creek Park in the district and all over Bethesda and Chevy Chase in Maryland. It's a party that never ends and it makes "Gossip Girl" look like wholesome Americana in comparison. Did a 17 year old Brett Kavanaugh sexually assault (as it is currently defined) Christine Blasey Ford at one of these debauched house parties 35 years ago with the booze flowing and music throbbing throughout the tree lined neighborhood of North West DC? Having been their myself (figuratively) in a different pair of shoes about 5 years earlier let me tell you, first hand, that these Holton-Arms broads are conniving, naughty minxes who love to shag and I say that as a compliment (my grandmother, mother and aunt are all alums). So if Brett denies it happened then he's either fibbing to save face (and his nomination) or he was too drunk to remember what happened (very possible) or it actually didn't happen which is almost the worst possible answer because it would mean that this entire episode is one gigantic black-hearted lie by a girl who, rumor has it, was a pretty promiscuous teenager. If some scientist were to do a study tracking the sexual intercourse of the graduating classes of Washington DC's private prep schools over the past 50 years he would learn that every elite family in our nations capital has slept with each other - a lot.

Forget about Merrick Garland because he was never going to get on the court and everyone in DC knew it. Forget about abortion because this fight has little or nothing to do with overturning Roe v. Wade but everything to do with money. The money in question is the gusher that springs from Capitol Hill and sprinkles the swamp with pools of gold which the local residents scoop up to pay for their children to attend Holton-Arms and Georgetown Prep. Kavanaugh is an existential threat to the Administrative State (AKA the Deep State) because HE KNOWS how it works from the inside and he'll effectively gut it which will turn off the spigots and dry up the golden puddles that local vipers depend on for their livelihood and pleasure. This is going to be a very satisfying fight because it's between two people at the dead center of the national conflict - the cold civil war - that we're currently living through. And I honestly don't care how it turns out because I'm a winner no matter how it shakes out. If Kavanaugh survives the Senate Star Chamber and makes his way to Hamburger Hill then the Democrats will have built a Reservoir of hate so deep in the judges psyche that he'll be the most reliable 5th vote the conservatives could ever have. If the Dems prevail and kill this nomination they will effectively nationalize the mid-term elections and turn a Blue Wave into a Deep Red Bloodbath ensuring that Trumps next SCOTUS appointment gets confirmed without objection. And which judge is next at bat? My guess is she's the kind of person that will make Sen. Dianne Feinstein's head explode and was probably Trump's first choice from the start.

I believe an iron clad super majority of conservative justices on the SCOTUS will be VERY GOOD for our country - not just because I’m right-wing but because it will force the Legislature to do it’s goddamn job instead of pushing everything up to the SCOTUS so that they can make up some law that Congress doesn’t have the balls to pass. Let Sotomayor and Kagan squirm in mental anguish for the rest of their working lives dreading the morning alarm that starts their excruciating day of arguing their side to seven stone faced “originalists” who just aren’t buying it. Let them curse the day BHO appointed them to this living hell.

Anonymous said…
My question is why was she in marriage counseling talking about this alleged episode? My guess is she was cheating on him and using the adolescent trauma as a get out of jail card for being a lying tramp. A lie told to get out of trouble for lying is not contemperaneous documentation.