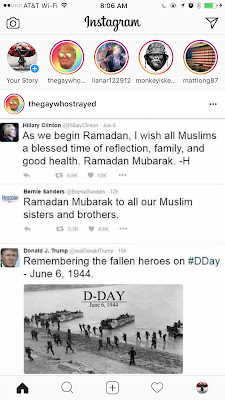 The Instagram Wall is raw truth. Take a look at the screen shot posted here and behold. One of the KOTCB Instagram followers - @thegaywhostrayed who is truly a magnificent spirit - mashed up some June 6th tweets and presto! you see a powerful truth that explains pretty much everything. Check it out and see how HRC, Sen. Sanders and POTUS commemorate the day:

Hitlery - "we" are celebrating Ramadan? Well, not really because "I" (Her Highness) make a wish for all "you" Muslims take some time to reflect on something, not sure what (not terrorism) and spend time with your family and live well. Signing off Ramadan Mubarak has nothing to do with Hosni Mubarak who was released from a military hospital 3 months ago after spending six fucking years in prison thanks to Huma's idiotic "Arab Spring" that set the Middle East on fire.
Bernie - informs the Muslims that when they're Ramadan Mubaraking with their family that "family" includes him (and us) because we are all brothers and sisters. Muslims must love the fact that their holy month includes a Jewish Constitutional Monarchist breaking bread at the iftar.
The Elvis from Queens - Fuck Ramadan, we're going to remember the American heroes who kicked Nazi ass and saved European civilization. All that blood and treasure sacrificed so that future generations of Europeans could forsake their inheritance and celebrate Ramadan. 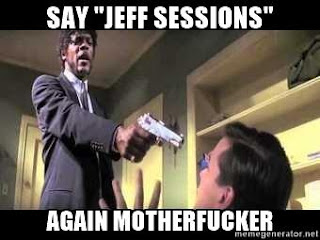 While all of D.C. was watching AG Jeff Sessions spank Democrat senators in a ridiculous hearing on Russian collusion on an election that happened 9 months ago the rest of "the world" was watching Sec. of State Rex Tillerson inform other senators on the Foreign Relations Committee that business as usual is over. No more 6 course dinners at Plaza Athénée when you visit Paris Senator Corcker. No more hot and cold running party girls when you take a "fact finding" boondoggle to the DR senator Menendez. The players won't kiss your ass anymore if you can't spread the wealth or threaten to cut off the milk and honey pouring from Uncle SAM's cornucopia.
I'm coming to the conclusion that the whole Russian collusion witch hunt is a brilliant smokescreen to keep everyone in the media focussed on a shiny object while Trump and his team dismantle and reform all kinds of Washington D.C. policy, regulations and operating procedures. Who in America understands the Tillerson is planning to cut the State Department budget by 30% (not a typo people, I said 30%!!!) and that just doesn't happen in our nations capital. That's what's NOT being reported but that's what's happening.