Waiting for the tweetstorm 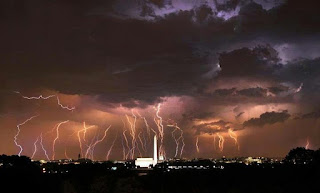 Things have been kind of quite over @realDonaldTrump for the past few days and that's usually a foreboding sign of a building tweetstorm on the horizon. Trump crushed them with the Comey firing and the reaction has been swift and terrible, as it often is when Trump drives a stake in their heart, but if history is any guide the POTUS hunkers down and waits for his enemies to exhaust themselves with spin, denunciation and doomsday prophesy before dropping another bomb (or series of bombs) that completely discombobulates the narrative and leaves his detractors speechless. Comey was the bulwark protecting many evil and nefarious people from scrutiny and, quite possibly, prosecution. At first you wondered why the Democrats, Republicans and News Media were so indignant over the sacking of a man who provided such lousy leadership for the bureau of government he was entrusted to oversee. Let's face it, Comey was a horrible choice for FBI director and his testimony, commentary and commencement speeches prove it so why the consternation, aside from the obvious reasons, over Trump giving him the hook?
Basically, he's guilty of obstruction of justice + lots of other things he did because he believed there was no way he would ever be called on it. Obama then Hillary then retirement and he walks away clean midway through HRC's second term. Shocked by the Trump win, he knew his position was secure because there was lots of dirt on Trump and he'd threaten to use it if POTUS got out of line. But Trump fired him anyway and threatened him about leaks - It's a sign of desperation that Jim Comey is leaking memos to the NYTimes that they might bring down Trump before the executive branch figures out what the FBI was actually doing for the past few years. You can bet that the loudest impeachment voices are the same people Comey had a lot of dirt on and they want protection.