February 28, 2017
As ‘Post-election stress disorder’ sweeps the nation the fallout has been swift and terrible or exhilarating and wonderful (depending on your political affiliation) or something more nuanced and complex if you happen to be a "political moderate" and thank God we have a taxpayer financed Government News organization to document and make sense of the carnage/celebration/anxiety.


“It’s been crippling,” said (Wally Pfingsten) the 35-year-old San Mateo, Calif., resident and political moderate who has supported both Democratic and Republican candidates in the past. “I feel angry, really, really angry, far more angry than I expected to be.”

I'm sure Mr. Pfingsten will work his way through his P-ESD and even though he's got a long way to go, anger is only stage 2 in the Kubler-Ross model, a MAGA future awaits him if he will only believe. One of the many benefits of being a political moderate is ideological flexibility and comme ci comme ça sensibility that's absolutely infectious with a 3-4% growth in quarterly GDP. The effects of post-election stress disorder are far more dire when it comes to the ideologue and we've already seen how the "conservative" #NeverTrump big brains are questioning their epistemology in response to last November's election. But for the establishment Left questions about truth are a secondary concern because they're struggling with the fundamental nature of reality itself in a Trumpian Ontology. Take the case of Adam Gopnik in this weeks New Yorker who is starting to sketch out a very troubling pattern in recent events:
I wish Adam would read the KOTCB blog because these three magical moments might not seem such an ominous tear in our space/time existential fabric - but he doesn't so they do. I think he's taken the Red Pill and is seriously contemplating the idea that we all exist in a computer simulation and some overlord prankster has installed a virus in the code - "There’s a glitch, and we are in it." It seems that the only way he can accept the current "reality" is to transmute the gold of Obama into the lead of Trump.


The implicit dread logic is plain. If we are among the simulated minds, then we exist in order to be stimulated minds: we exist in order for the controllers to run experiments. Until recently, our simulation, the Matrix within which we were unknowingly imprisoned, seemed in reasonably sound hands. Terrible things did happen as the cold-blooded, unemotional machines that ran it experimented with the effects of traumatic events—wars, plagues, “Gilligan’s Island”—on hyper-emotionalized programs such as us. And yet the basic logic of the enfolding program seemed sound. Things pinned down did not suddenly drift toward the ceiling; cats did not go to Westminster; Donald Trump did not get elected President; the movie that won Best Picture was the movie that won Best Picture. Now everything has gone haywire, and anything can happen. 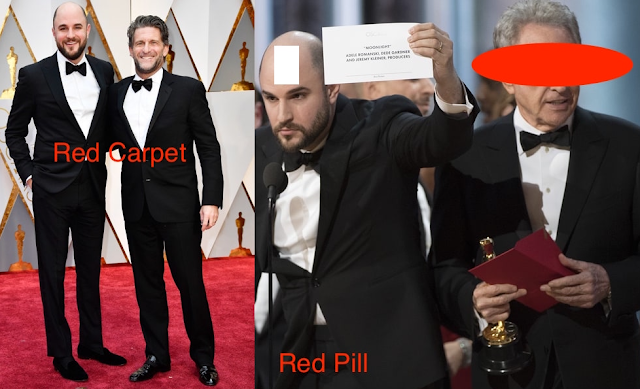 Here I must interject my dissent on the "reasonably sound hands" that have, heretofore, run our cosmic simulation. If Adam Gopnik believes this "everything gone haywire" world is a "recent" development then he suffers Democrat Hack Psychosis NOT Post-Election Stress Disorder. He's forgetting:

Think about it, the simulation has been running in "anything can happen" mode for a long, long time. This New Yorkers prayer for "normalcy" will never be answered because it never existed.