Goofy Elizabeth Warren is weak and ineffective. Does nothing. All talk, no action -- maybe her Native American name?
— Donald J. Trump (@realDonaldTrump) May 7, 2016

The Elvis from Queens does go for the kill shot and this time his scope is calibrated and targeted right between the eyes. It's a silver bullet takedown of a vastly overrated schoolmarm who's way out of her Ivy League. Goodbye Fauxcahontas - slink back to your Senate office and Tweet away.

Last Tuesday Senator Warren started Tweeting hate at the presumptive GOP nominee (probably as a proxy for HRC) and The Donald decided to take her out now before she could snag a VP tap to sooth the Bern. I continue to think Plan B is still in effect and Hitlery will never make it to Philadelphia this summer because she's stupid, weak and corrupt:

1. Stupid - this is the most idiotic set of "attack ads" ever conceived. The first one is a set of Trump greatest hits that have put the guy on top - people will watch this and say, "yep, that's what he's been saying he's going to do." The second is a string of GOPers lying about Trump - very convincing.


If you're a Democrat or Independent who do you hate more? 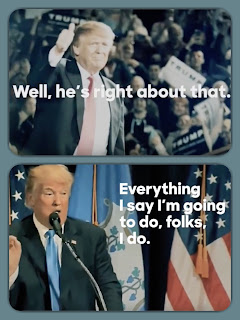 The kicker is that both ads end with positive images of Trump pointing out that he's right and he does what he says he's going to do. If this is the best that team Clampett can put together - the opening salvo as they say - then Trump is a sure winner in November. They obviously have no idea what they're up against or how to fight it. Not everyone is as ignorant as Mook's Mafia but these Ready for Hillary guys are clueless and Democrat powerbroker money men are not going to let their political party get buried for the pride of the suffragettes. It's hilarious that the HRC campaign puts out two ads that could have been (should have been) created and released by her opponent making him look strong, right and a man of action while making his GOP naysayers look weak and phony. The KOTCB blog has pointed out that Hillary objectively is a  horrible retail politician and is much more effective doing the blocking and tackling in behind the scenes staff meetings, committee meetings and black opps villainy on behalf of a man (Bill) and it looks like she's doing it inadvertently (I think) for The Donald.

2. Weak - Hillary Clinton is loosing. Trump has not been resting on his throne having vanquished his GOP adversaries but is busy campaigning for Bernie in upcoming Democrat primary states. He is going for jugular by attacking a fundamental weakness (that also happens to be true) with a goal of discrediting the entire rational for her Presidency. That's because Trump is not running against the last eight years of feckless Obama policy or the last 16 years of middle-east adventurism - he's running against the entire post-Reagan era starting with GHWB and including the Clinton years. So is Bernie and, though it's been unreported over the past week, the Bernie forces are not backing down and getting Ready for Hillary - They don't want her and they're going to fight her at the Dem Convention.

3. Corrupt - Big whoop, right? Yes, Hillary is corrupt and blah, blah, blah. Everyone knows it and just rolls with it because, well, just because. But Hillary, being a Clinton, made the same mistake that Bill made back in the 90's - she actually broke the law and lied about it. She stepped out of the gray area that she normally makes home and into the land of black and white. And Guccifer knows the truth. And Guccifer is not even a real hacker so take it from me - if Guccifer got into Hillary's private email server you can be sure there were others. The FBI is not going to let her slide even if the Justice Dept. tries to bury it and it will blow up - especially if HRC looses the California primary to Bernie.

Goofy Elizabeth Warren is going to look even goofier when she's standing on the main stage next to Joe Biden at the Democrat Convention as the lesser half of her parties 2016 ticket.