Greasin' up the cog machine

July 16, 2015
With his customary erudition Christopher Caldwell explores the source, currents and possibilities of the Greek tragedy (or maybe it's a comedy) that has been unfolding over the past 5 months (years) and sums it all up with this hammer swing:


"Still, Tsipras’s gambit has unleashed thoughts among other political actors that cannot be unthought. Indebted peoples, leftists, and nationalists across Greece and Europe are beginning to realize that they have not only reason to distrust the EU but also opportunity to change it. Russia, which in early July hosted a summit of the BRICS countries (Brazil, Russia, India, China, and South Africa), has grown close to Greece of late (president Vladimir Putin talked to Tsipras on Monday) and sees a chance to tip over the wobbling European consensus on the U.S.-led program of sanctions occasioned by its annexation of Crimea. And there are other countries in Europe. Were Greece kicked out of the euro, now or later, some other nation, possibly Italy or Spain or Portugal, would emerge as the community’s new laggard, its sick man, its black sheep. It would look to see whether Greece had done better inside the EU or outside. A terrible fear began to motivate the EU’s leaders this week—the fear not that Greece might die outside of the euro but that it might thrive."

Starting in January Hope & Change is Greek to me through June OMG the IMF is SOL the KOTCB has been keeping a close eye on the oil in the Aegean Sea. It's been a wonderful spectacle from this side of the Atlantic and has the loony USA left breathing fire or leaping from the windows depending on the days events. On June 5 and 6 they painted the islands red with a bucket of joyous rebellion known as the Greek bailout referendum, 2015 - direct democracy in action. A week later I received this update from the Journal - oops, time to start talk'n them off the ledge on the upper west side. 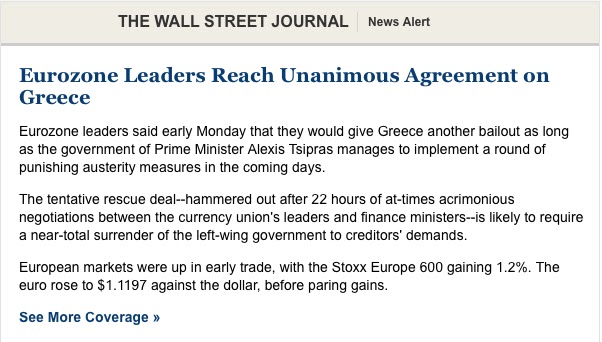 Stratfor gives the sorry timeline and throws out this howler:

"Tsipras is investing significant political capital in measures he has said he does not believe in, but which the creditors consider necessary to keep Greece in the eurozone. He is certainly paying a steep political price for his moves, and the status quo in Athens will change soon..."

Oh really, and what is the"status quo in Athens"? And it will "change" to what, exactly? And so what anyway? The Greek tragedy has never been about Greece and with or without Greece the crisis will continue. The machine will always have its German accountants and what they're giving us this century is a lot better than what we got last century. "Oskar Groening had always said he was “a cog” in the Nazi killing machine."


"At the heart of the case was the controversial question of whether people like Groening who were “cogs” in the Nazi machinery but did not actively participate in killings are guilty of a crime."

The list of our modern day "cogs" is long and Germany should not shoulder the blame alone - in fact, we might look to some Germans for a solution far more appealing than the "final solution" of yesteryear. Ulrike Guérot is a German with different ideas on how to organize the continent that will let Germans be German and Greeks be Greek. I support her vision and so should Tsipras/Syriza - but they won't. They are sharing a cell with the Germans in the EU prison where the guards wear suites.