U.S. District Judge Kathryn Kimball Mizelle finally did it - after 14 months of mandatory masking by order of the Centers for Disease Control and Prevention (CDC) this capricious and ineffectual edict has been ruled unconstitutional and, it follows, illegal.  Since January 29, 2021 the CDC has prohibited citizens to travel without wearing a mask but the insanity actually started as far back as July 14, 2020 when "CDC calls on Americans to wear masks to prevent COVID-19 spread." That's 643 days of stupidity folks - it covers the Kenosha Riots, the attempted kidnapping of Gov. Gretchen Whitmer, the Fake 2020 Election, the 1/6 Save America March and Insurrection, Jo(((K)))e Brandon's phony Inauguration, Trump's 2nd Impeachment, a horrible year of pathetic "leadership" from every single elected official in Washington DC, a war in Eastern Europe - and NOW, at long last, a federal judge in Florida ends the mask tyranny with one simple ruling from her bench. Thanks a lot government!

My 10 year old kid had to wear that fucking mask for a year and a half because no federal judge in this country had the simple decency to make a logical (and Constitutional) ruling that prevents the mandates on masking. One year to the day after the CDC instituted their illegal masking order I was writing my son's teacher this letter:

I read my son's report card. I got to the section on his conduct and had to read this:  "His goal for the third quarter is “to keep my mask above my nose.” While I think we are all suffering from mask fatigue, it is essential to wear masks correctly in order for them to be effective."

This is the same complaint I heard from his teacher last year and I’m going to give you the same honest response that I gave her.

I despise the school's Mask Policy. I don’t believe masks have any positive effect on preventing the transmission of COVID-19 but I believe they do have very deleterious effects on a child's physical and mental health. My son knows exactly how I feel about wearing a mask for 7 hours a day in school - I hate it. Keeping the mask “above his nose” is a horrible goal for the third quarter. It is not essential to wear a mask for anyone’s safety and I expect the school to do away with the mask mandate ASAP (meaning well before the end of Q3) which will make all of this a non-issue.

Masks are for slaves and criminals and my son is neither one of those things. He NEVER wears a masks outside of school. Please use your influence to end the mask mandate policy at school. Don’t expect me to support the wearing of masks in any way because I will not.

It's impossible for me to accurately transmit the overwhelming contempt I have for the current system of government the USA has devolved into during its 50 years of failure. We the People have been subjected to wars, kinetic and psychological, directed from the National Security Apparatus with debilitating cultural and spiritual damage to the innocents of this once great nation. Fortunately, over Easter weekend, there was a mostly peaceful BLM protest in Pittsburgh dutifully recorded by Alt-Media journalist Andy Ngô where a photo was taken that captures my mood with an astonishing clarity. It has been said that "a picture is worth a thousand words" but the photo of professional agitator Vuestro Merced getting punched in his/her masked face by a cop (s)he pays taxes to employ exposes the undercount of this adage. This image contains a long novel at the very least and probably a multi-volume history of the first two decades of the 21st Century as I conceive of it. The "diversity strong" kevlar armored Thin Blue Line. The Will Smith treatment for foul-mouthed critics. The pooch wearing a Bane muzzle. The tranny protester in fishnets with a wig and Mexican flag face diaper. The masked onlookers wearing their sweat-shop slave labor seekers.  The denouement of Joe Biden's America is frozen in time for eternity.

Were I to possess a time-machine I would be tempted to transport this photo back to 1972 and show this artifact to a young Joseph Robinette Biden Jr.  I'd sit down next to him at Katie's Italian restaurant and say, "listen Jack, next year you're gonna get installed as junior Senator from this tiny state and for 5 decades you'll do the bidding of the banks, credit card companies and industrialists that put you up there on Capitol Hill. At the end of your run as a "public servant" this (hold up photo) is the America you will have created." The look on the young politician's face would be confused and incoherent - not too much different than he looks now - but it might have shaken the pig-ignorant confidence in his political mission. Maybe, but I doubt it, and besides, Jo(((K)))e Brandon doesn't set the agenda for the United States of America so his participation in this charade is irrelevant to the results the government produces. Impeach him! Vote him out of office! Let him wander around the stage aimlessly! It really doesn't matter if Joe stays or goes because he's ineffectual and replaceable - that's why he got the job.

As Sundance points out in a cleaver article titled Jack’s Magic Coffee Shop over at The Last Refuge the photo above is brought to you by a public-private partnership I like to call techno.comism. The Intelligence Community seeds the hideous psyops of racial strife, sexual confusion, drug violence and bio- terror that most Americans struggle to survive and navigate every day. The IC has their reasons for doing this to the sheeple they stand watch over but mostly they do it because they can. If the Deep State IC has one of their agents in the CDC issue an "order" to wear a mask it follows that 65% of the general population will do what they're told. If a politician objects to the CDC's edict the IC pays them a visit and tells them to shut their mouth and get with the program. No "elected representative" in DC leadership made an impassioned argument against illegal mask mandates or threatened to cut off funding for the CDC until the busybodies in Atlanta stopped their unconstitutional demands. The mask mandates are not legitimate, according to the Federal Judge, so are the lawyers who populate the House and Senate incapable of reading or understanding the US Constitution? It doesn't matter if they are - They don't have any real agency.

This crisis of IC directed mind control of the people using time tested methods of behavioral modification by psychological torture or social conformity enforcement that exploits human weakness invalidates the basic tenants of representative democracy. My brother was flying on the day of judge Mizelle‘s ruling and he informed me that many (most) travelers in the Florida airport were still wearing their masks! These people don’t want to take off the mask for any reason - their physical health, their mental stability, the Constitution - none of it matters because someone in authority on the TV told them that wearing a face mask was good and wearing 2 masks would be doubleplusgood. These manipulated and controlled people can not be allowed to choose their leaders or govern themselves without oversight - can’t happen! And yes, I’m still pissed off about the 2020 election and the way the Donkeys and Elephants in the Uniparty conspired to steal a historic win from Trump and give the crown to a feeble minded, diaper wearing political hack. But do I condemn them as evil for doing it? Not really. Not after watching my fellow countrymen curl up in a ball after Nov. 3rd, put on their masks and get jabbed with experimental poison.

The mask is off. The face of America’s true leadership is hidden behind the walls of the National Security Agency but the illusion of elected politicians working on behalf of their constituents best interests has fallen away. Will the White House reformulate its policy? Will the DOJ appeal the court ruling? Does the CDC stand behind its recent extension of the masking order? What do the court jesters of the Administrative State think of this troublesome judge? None of the politicians or talking heads can say a definitive word until they get orders from Fort Meade or Langley. This picture is the country you live in - it’s not your fault because you didn’t create it (you didn’t even vote for it) - it was imposed on you by people you’ve never heard of and don’t understand. Find a way to thrive and survive - the insurrection starts in the mind - and prepare for DarkMAGA. 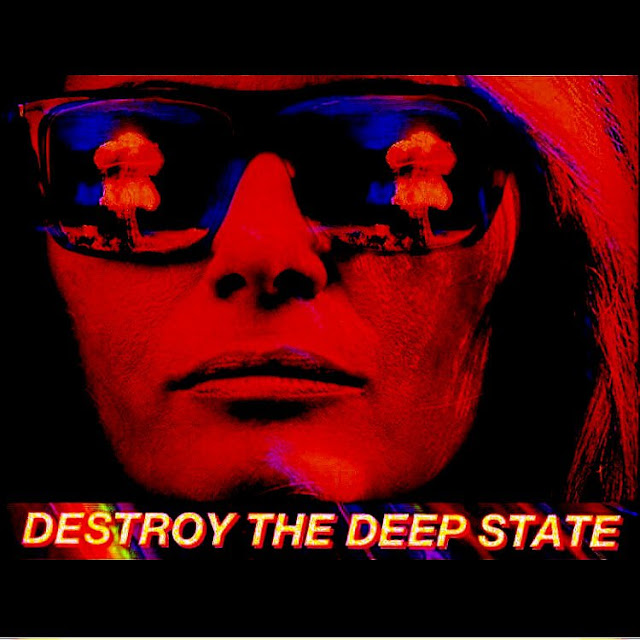