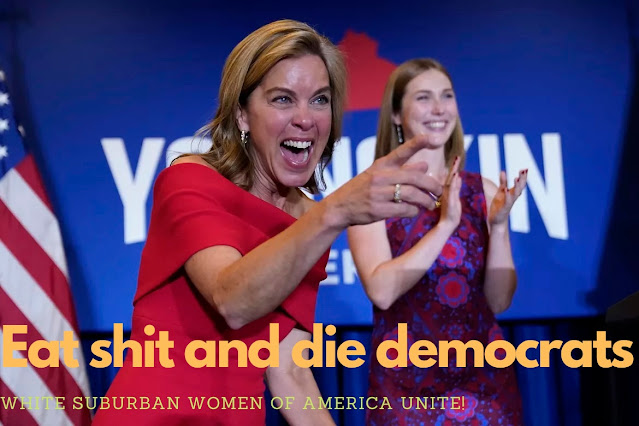 My brother called me on election night (11/2) at 8:28 PM ET to ask if I was watching the results trickle in for the Virginia Governor's race? Answer: No, I haven't watched Television for a year, I couldn't care less who wins and whoever wins will be the "winner" of a rigged election. He informed me that Fairfax County in NOVA had just reported tabulation errors and started a "rescanning" of ballots which I considered humorous news. I asked my brother if he had made a credit card purchase or cash withdrawal from an ATM over the past 12 hours (which he had) and then wondered how businesses and banks can account for millions/billions of transactions every day but the 3rd richest county in America can't tally 436,783 ballots? If Visa or Mastercard ran the voting infrastructure of Virginia they could tabulate the totals on the fly and citizens could watch the returns come in on their smartphone app. There would be an encrypted two-phase commit protocol complete with a scanned image of the paper ballot linked directly to each corresponding vote so that auditing the accuracy of the results could be accomplished in days (not months) and "every vote would count." That's what everyone wants, right? 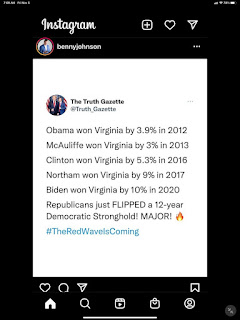 The next morning I was laughing it up with a political operator who knows how things work in The Old Dominion and he was going over the reported returns in 2020 vs. 2021 to compare Trump's vote totals with the "winner" of this year's gubernatorial contest. In an apples to apples comparison, with 95% of precincts reporting, when Trump was crushing Biden by hundreds of thousands of votes and the Decision Desk handed Virginia to the diaper clad Jackass but this year, with a much smaller lead, the DeDe fed this Blue state to the pachyderm - go figure. You must understand, the Republicans were so upset by perceived election fraud in 2020 that this year, in Virginia, the National GOP got involved and made sure they had poll watchers in every precinct and an army of lawyers ready to litigate, litigate and litigate some more to prevent any irregularities with the process which is every American's sacred duty to preform. In other words, all the precautions the political party leadership should have put in place last year, when it really mattered, but didn't were firmly in place this year to make sure a private equity executive with no political experience, no base and no charisma got elected as Governor. Oh, tear after jolly tear rolled down my chuckling cheek as my friend analyzed the results and pointed out the astounding irregularities and IMPOSSIBLE turn arounds by various voting blocks. For example, imagine what it must be like to be a White Suburban Woman:
"Accounting for nearly three-quarters of women voters and nearly 40 percent of the entire electorate, white women backed Youngkin 57 to 43 percent, according to NBC News exit polls — a 13 point swing compared to 2020, when white women in Virginia narrowly sided with President Joe Biden over Trump."
Disqualifying - Repeal the 19th!!! How fucking scatter-brained and down right stupid do you have to be to vote for a mumbling incontinent fool who campaigns on a promise to be the most progressive president in US history and then, a mere 364 days later, you vote for Mr. Rogers in a fleece vest who campaigns on a platform of lower taxes and white supremacy? I'd be worried if I thought, for even a second, that these voting results were legitimate and that WiSubWo's or any other demographic were accurately polled or reported on but after Nov. 3, 2020 I know that American "democracy" is a big fat lie so all is well. If the powers that be want to blame Virginia's Red Wave on WiSubWo and their irrational selfish mood swings then I'm certainly not going to lift my head out of the foxhole and complain - nobody can disagree with White Suburban Woman. Nobody. 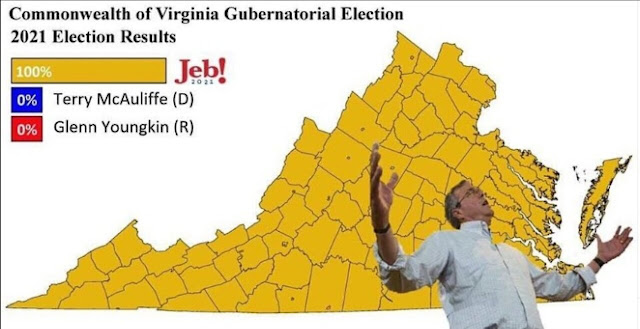 While the reported results of exit polls and voter preferences based on sex, race, religion, LGBT pronouns and every other slicing and dicing these politico types make up are entertaining the fact is that none of it is true. Rural MAGA voters did not come out in higher numbers for the private equity banker than they did for the Elvis from Queens, Black voters don't even bother showing up at polling locations, Hispanics are not more enthusiastic about Terry McBloomberg than they were about Jo(((k)))e Biden and WiSubWo's didn't flip their party affiliation and decide to support Hitler dressed as Mr. Rogers - I know WiSubWo are pill popping chatterboxes who can mind-meld with Oprah every day AND admire Bill Clinton but once they commit to Coca-Cola as their sugar water it's done and they DON'T "change their mind" and buy Pepsi. There is no such thing as a 10 point sea-change when Blue State brand loyalty has been established but if there was then the GOP has cracked the code and we should see a lot of hedge fund managers and corporate CEO's jumping in to the politics game. New York Governor Stephen Schwarzman sounds pretty good to me - come on WiSubWo, make it happen. 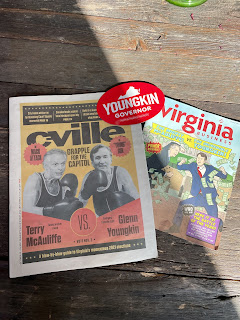 I went to see Glenn Youngkin speak at a local diner in my Virginia town this past spring just before the highly irregular nominating convention the GOP organized with the intention of putting this neophyte at the top of the ticket. His selection was an inside job from the minute some GOP elder statesman walked into the Carlyle Group office, put his hand on Youngkin's shoulder and said in a soft sonorous voice, "hello, Mr. President" - and with the support of WiSubWo POTUS Youngkin just might happen someday. That's how it started but, naturally, that's not the way Youngkin tells it because that would give away the game so his stump speech opener was a recounting of the moment, in the solitude of his back yard, that he was overwhelmed with the desire to run for Governor and save his native Commonwealth. Shortly after the garden epiphany Glenn walked into the family kitchen and ran this idea by the WiSubWo of the house who, surprisingly, was completely supportive of this absolutely insane career change. I think I speak for all Virginian's and the RNC when I say, "thank you Suzanne" but from that day in the diner until election day November 2nd I didn't pay any attention to this prize fighter - never watched a debate or a speech or even read an article about Youngkin. Finally, after all the votes were counted I watched a recording of the Governor elect's election night speech and...
"Well first, let me thank Suzanne. I have said many times that the Lord knew what he was doing because I need her a lot more than she needs me. When I told you on that fateful Friday afternoon, that a conviction had come over my heart to go serve Virginians, you did respond. You responded with grace, you responded with support, you responded with unconditional love. Thank you."
The campaign ended (in victory) just like it began with a fabricated story about Glenn's "conviction of the heart" and unbelievable voting patterns sold to the gullible public as a reaction to critical race theory (CRT) which, as it happens, has been taught in various forms throughout all Virginia schools (public and private) for the past 30+ years. This election theater was enhanced by McAuliffe saying crazy shit like “I don’t think parents should be telling schools what they should teach” and hiring Marc Elias to "fix" the VA election. The Virginia Republican Party doubled down on "election integrity" and flooded the zone with poll watchers while preemptively accusing the (D)'s of voter fraud just to make sure that everyone in America knew that this election was getting extra-super-serious scrutiny. They even pulled out the Fairfax Co. midnight ballot dump challenge to give the charade the illusion of a down and dirty fight but even with all the props and special effects this show was a dud. Terry took a dive and his loss was part of the price the Dems had to pay to get Trump out of the White House in 2020 - Youngkin's win is the soothing ointment the GOP establishment is lathering all over its MAGA base to heal the wounds of the Nov. 3rd coup and betrayal of their President.
Five years ago today Donald J. Trump shocked the world by "winning" the Presidency of the United States of Americaand kicked off a strange (and sad) rebellion by the ruling class of the country whereby they chained themselves to this brilliant artist and allowed him to yank that chain for 4 long years. Finally, when they could take not one day longer of his abuse the Uniparty mutinied and threw this irascible showman overboard into the deep, dark sea but they were still chained to their sinking nemesis. They're going down... down, down, down, down, down and not even the WiSubWo can save them.