...all in the name of ambition! 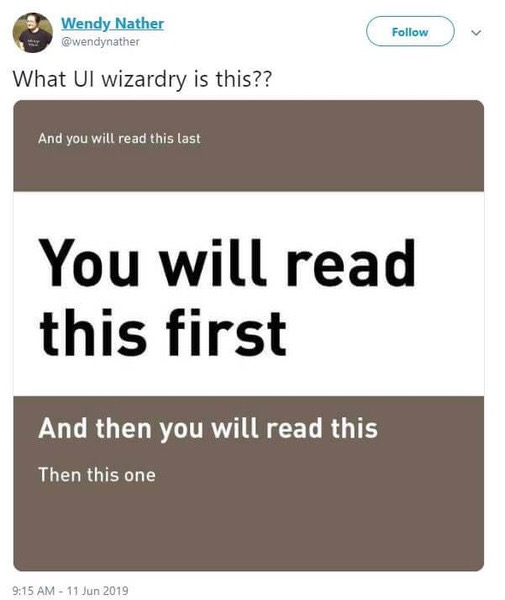 Dear Reader,
I would like to point out that we are living through a unique and original moment in literary history and someday the tweets and retweets of our FWPOTUS Donald J. Trump will be collected, cataloged and bound in some heretofore uninvented form of "book" with hyperlinks, video/audio playback and a fully annotated QAnon appendices in recognition of what must by now be admitted to be a prolonged work of omnipotent (and very stable) genius.


I started this blog post last Sunday after Jeff Epstein's murder in Federal lockup was reported on Saturday AM and Trump retweeted the comedian Terrence K. Williams riffing on the obvious suspicions that Hillbilly whacked the Stein to shut down any legal proceeding that would expose their association with the sex trafficking extortionist. Mr. Williams is NOT a conspiracy theorists, which the #FakeNews insisted on labeling him, but an Afro-American funnyman whos ribaldry has a decidedly #MAGA slant. But I am a conspiracy theorist and on Saturday August 10th at 9:05 AM when I texted my hommies the sad news of Jeffrey's demise this is what I got back: 1. "Unreal, they did it" and 2. "Wow" (as in wow I can't believe the Deep State killed Jeffrey Epstein right in front of everyone's face and is just going to thumb their noses while politicians, the DOJ and our journalists and "thought leaders" stand there mouth agape and dick in hand). There is no "conspiracy theory" surrounding J. Epstein's death because, knowing what we know about him and his associates, it's obvious to everyone in the world that he was killed. He was killed to shut him up and end any further investigation into what he did for the past 20 years and who he did it with (and for). It's not complicated. It's not even controversial and the audacity of it is pretty funny if you're Terrence Williams or DJT because everyone knows what's true but the #FakeNews and corrupt officials keep on "acting" like they don't know what happened. "Don't jump to conclusions" and "let's see what the investigation turns up" because, you know, "pedophiles often commit suicide in prison" and "Jeffrey Epstein must have felt the walls closing in" which would have been very uncomfortable for a Billionaire jet-setter like him. The Elvis from Queens followed up his hilarious retweet of Terrance Williams musings with a tweet of his own.

Think how wonderful it is to be able to fight back and show, to so many, how totally dishonest the Fake News Media really is. It may be the most corrupt and disgusting business (almost) there is! MAKE AMERICA GREAT AGAIN!
— Donald J. Trump (@realDonaldTrump) August 10, 2019 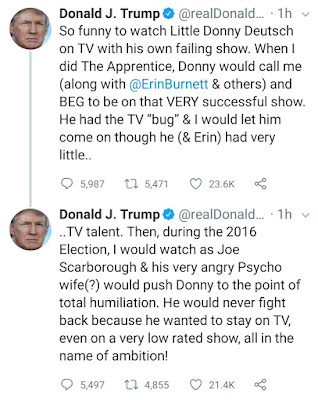 Why? Why do they lie so much and so shamelessly? Over the next few days our favorite President explained why in a series of tweets (and retweets) that ridiculed his critics and allies including Biden, Scaramucci, Donny Deutsch, NBC News, WaPo, Germany, Russia, non-citizens, Mueller, Fredo Cuomo, Google, Red Flag Laws, China, Lotus Flower, The Federal Reserve and many, many others. He's firing boulders of truth from le trebuchet like there's no tomorrow and smashing the folly wall as only someone who's been on the inside can do it. He understands these people - he is one of them, or at least he was, or at least every one of them thought he was but maybe he wasn't because he sure doesn't seem like one of them now. If he is one of them then he is the biggest traitor of all time because he's calling them out at almost every opportunity. He's making fun of them and they can't stand it - that's why they lie all the time. They don't like what Trump is doing and they don't quite understand that the joke is on them because they're used to telling the jokes and making the joke about other people. How could they be the butt of the joke when they're the ones pulling down 6 figures for reading #FakeNews and mixing it up with celebrities? This Trump guy is making fun of us - he's a bully. And all the deplorable (and irredeemable) rubes are laughing along with him - they must be white supremacists. It's hard to have the tables turned on you like that and go from being a "star" to being a "failing" "beger" with "very little TV talent" who was "humiliated" by Morning Joe and "his very angry Psycho wife(?)" just to keep your spot on "a very low rated show." Sad. Makes you want to sleep through the alarm on Monday morning and Epstein yourself on Tuesday rather than face another hump day in this dystopian American utopia of Flags, Fun and Freedom.

Yep, It's pig headed NYC Yankee jingoism and #AmericaFirst xenophobia all the way down - it's called Keep America Great or #KAG for short. It flies in the face of "our shared values" (whatever those are) and incites a white supremacist violence that puts everyone in danger of being shot at Walmart. It's dangerous for women and children and Muslims and immigrants and transexuals and communists of every race, creed or religion so can We the People get a #MeToo and impeach this motherfucker before he destroys the "norms of our democracy" and builds his Big Beautiful Wall across our Southern Border? Too late Donny Douchebag and #RedFlagFredo because You Can't Stop This Motherfucker and nobody else can either. He's Making America Great Again and taking every blow while backing into the ropes and then counter punching like a Mer Fer and sending them down to the mat for the 10 count. Go ahead, kill Epstein, Trump doesn't care - it makes MAGA stronger and not knowing the truth - not even having the remotest possibility of learning the truth - justifies and validates everything Trump has been saying and doing for the past 3 years.

"Americans can do anything, go anywhere, and outperform anyone.

Nobody can beat us.

Nothing can stop us because winning is what Americans do."
—President Donald J. Trump pic.twitter.com/T64HLw3BFG
— The White House (@WhiteHouse) August 15, 2019