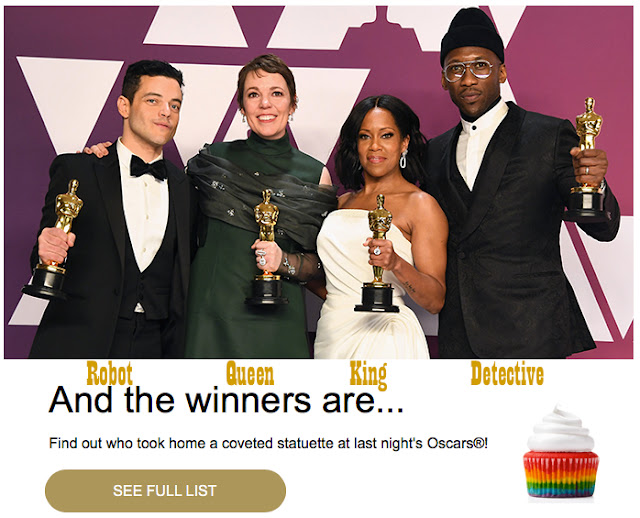 Academy Awards Dump 2019 is here but I really don't have much to say about this year's nominees (Links to old Oscar dumps can be found at KOTCB The Hart of the Matter). The only films I saw from the best picture category are "The Favourite" and "Roma" which are both pretty awful stories about miscarriages and frailty of human life. "The Favourite" explains why the American Colonies formed a revolution against the British Crown and created their own nation. "Roma" explains why the US Government, after marching to the gates of Mexico City in the 1848, turned around and gave the land back to the Spanish. There were also some movies about black folks, "Black Panther", "BlacKkKlansman" and "Green Book" but I haven't seen any of them. Also Bio-epics on Freddie Mercury, Dick Cheney and Lady Gaga but I didn't see any of them either. No, a pretty boring year as far as cinema is concerned - I did see "At Eternity’s Gate" about VvG and it was very good - especially the scene where Willem Dafoe as van Gogh is discussing the life and ministry of Jesus Christ with Mads Mikkelsen who plays a priest passing judgement on the painter. Hmmm... a lot to think about. A. Lot. To. Think. About.

You know what? I'm really thinking about KTLA #FakeNews anchor Chris Burrous who kicked the bucket (in a manner of speaking) this past Christmas and was praised as a wonderful colleague, husband, father and all around citizen by those who knew him best.


He died on Dec. 27th and it was sort of shocking - a mystery really - what the hell happened? Very little information was forthcoming.  "Three Weeks After His Death, Still No One Has Said Why KTLA Anchor Chris Burrous Overdosed at a Suburban Days Inn" - that was on Jan. 20th. Well, a month later the circumstances of this guys death were finally made public and wow, it really makes Hollywood movies look kind of tame and boring. "KTLA Anchor Chris Burrous Died from Overdose on Crystal Meth During Wild Tryst" is the nicest possible way of explaining what happened. "Burrous’ companion was cooperative throughout the investigation and no foul play is suspected in his death." Er, ummm, come again...

"Burrous allegedly told his companion he was feeling fine until the man noticed him making a strange noise, and flipped him over to realize Burrous had vomited inside his S&M mask."

WTF! This guy is a news reporter for a Los Angeles local station (NOT a small market) and he is assumed to be a civic leader and promoter of the truth and fact, like Jim Acosta or any other journalist in America who are constantly under threat because of the horrible tone coming out of the White House with regards to the 4th Estate. He leaves work early, hooks up with a male "companion" he met on some social "dating" app (not for the first time), they rendezvous at a motel in Glendale(!) and have insane same-sex S&M sex, he shoves some drugs up his ass and pukes in his gimp mask then dies. And I'm supposed to feel bad about this guys death for some reason? I love this DEATH and the absolute shock and awe that should be (but isn't) rippling through the national zeitgeist right now. This is the world that Hollywood has delivered unto us and it's normal. A "respected" news man, family man and all around great guy who 1. was not a drug addict and 2. was not a homosexual takes the afternoon off 2 days after Christmas and instead of going home to his wife and daughter he hooks up with some male stranger, takes crystal meth up the butt and dies choking on his vomit - it's not a tragedy folks, it's a comedy. Would someone PLEASE make a movie about this whole situation and expose it to the world for everyone to see. Democracy dies in darkness - let there be light!