The 4th Estate "does not know" 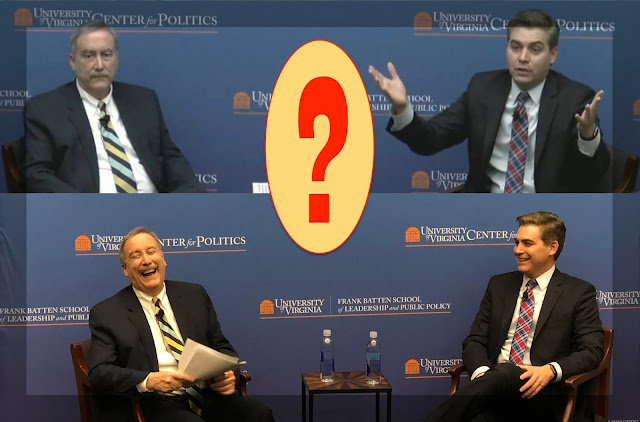 Last night Jim Acosta sat down for an interview with Larry Sabato at a national symposium series presented by the University of Virginia’s Center for Politics titled “Democracy in Perilous Times.” The evening’s topic was “The Fourth Estate: Enemy of the People?” and the crowd was warmly receptive of Acosta’s message which, boiled down to its essence, is that Donald Trump is a liar and he’s making life dangerous for reporters. Sabato introduced Acosta to the audience as Enemy #1 which drew mirthful laughter from the auditorium and then presented a short video montage of President Trump and his deplorable rubes insulting the reporter on many occasions over the past two years. This was all a set up for his first question which was, “how do you do your Job?” Acosta said the he accomplishes his duties by maintaining focus, reporting the story and telling the truth but acknowledged that it is difficult when the White House erodes the peoples faith in the press by bullying reporters. When asked what Trump supporters were like he claimed that they were “folks who get their information in silos” and want to scream at him (Acosta) while simultaneously asking if he’ll join them for a selfie. Sometimes Trump supporters will apologize for their behavior after the encounter and that gives Jim hope.

Acosta claims that the increase of death threats and press jeopardy world wide is made worse by the constant refrain of FakeNews emanating from the government with Trump at the top but includes all the Senators and Congressmen who also hate the media and say nothing to push back on the President’s rhetoric. Social media is a “sewer” and Acosta’s Facebook comments are “filled with hate” prompting him to wonder, “what have we done?” There has been no let up in the quantity or tone of insults because there’s “always a rally, always a segment on Fox News, always a tweet” to incite the MAGA mob and unleash their passions. The White House correspondent recounted his argument with the President over the description of a caravan approaching the US southern boarder last November and how that lead to the suspension of his press pass. His credentials were restored by a Trump appointed judge who felt that Acosta had not received due process from Press Secretary, Sarah Sanders, and called CNN’s victory “a great day for the Fifth Amendment.” When asked about Sarah Sanders, Acosta replied that “she understands how her boss feels” and said that the White House press briefing room might as well be converted into a cafeteria as it is no longer used for reporting. According to Acosta news reporters are very competitive but Trump needs to be the center of attention and some (unnamed) officials in the administration have approached him “outside the gates” to thank him for what he’s doing.

After addressing these pointed questions from Larry Sabato the floor was opened up and audience members were handed microphones to pose their questions the first one being “What is Trump’s mental health?” According to Acosta the president is “crazy like a fox” and appears to be of “sound mind” in all their interactions. The fourth question from the audience referenced a press conference early on in the Trump presidency when Acosta was accused of being FakeNews and told to go ask Jeff Zucker, President of CNN, what he had to say about it? The hypothesis was presented that Trump and Zucker have a long standing acrimonious relationship stretching back to the days when Zucker ran programing for NBC and negotiated the deal that launched Trump’s television show “The Apprentice.” Was this not the true cause of the bitterness between Trump and CNN and might it be possible that Zucker’s hatred of Trump fuels this conflict just as much as Trump’s animosity toward Zucker (CNN)? Acosta was flummoxed by this question and dissembled for several minutes but was confronted with a follow up question asking “how does Jeff Zucker feel about Donald Trump?” Acosta claimed, with a straight face, that he “does not know” how Jeff Zucker feels about Trump which, if true, casts a strange shadow on the news culture of CNN. Rarely does a reporter achieve the status of White House corespondent without being aware of his employers political leanings or potential conflicts of interests that might surface due to previous life or business experience. It could be considered a dereliction of journalistic ethics to not know the fundamental structure of a relationship so long and intertwined effecting the content and attitude of the very news citizens receive from an international cable news network. Sarah Sanders knows how her boss feels about CNN but Jim Acosta doesn’t know how his boss feels about Donald Trump which is probably why the administration calls CNN FakeNews.