the insolvent phantom of tomorrow 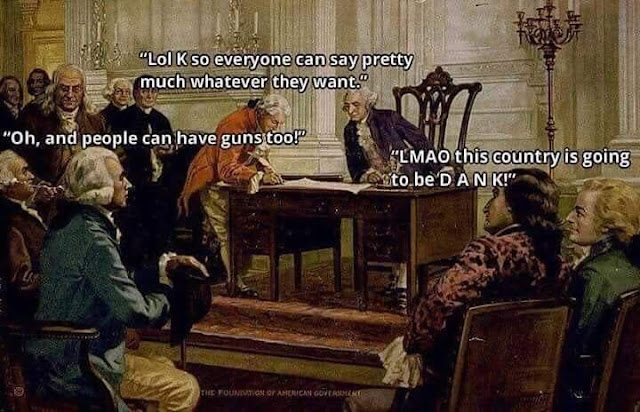 I love saying "I told ya so" and today is no exception but since yesterday was a cosmic trifecta (Winter Solstice, Ursid Meteor Shower, and Cold Moon) it feels especially good to anticipate tomorrow. So much WINNING!
😜
Whitaker cleared to oversee Mueller investigation - NBC is not happy but I'll bet Trump is and I'm looking forward to seeing what ORDERS the acting AG gives the office of Special Council.

House Republicans approve bill to fund border wall, setting up a final showdown in the Senate - ABC doesn't explain how something that was never even possible because the GOP "didn't have the votes" became a reality but there it is - Government shutdown for Xmas with no plans to reopen. Count the votes Chuck and Nancy. Even with GOPers Naying it still passed and now we'll get, well, not exactly a wall but a massive spiked fence which, to my eyes, looks pretty damned elegant and leathal.

A design of our Steel Slat Barrier which is totally effective while at the same time beautiful! pic.twitter.com/sGltXh0cu9
— Donald J. Trump (@realDonaldTrump) December 21, 2018

Trump’s defence secretary resigns amid reports of Syria and Afghanistan troop pull-out - Channel 4 complains that a man with the nick name "Mad Dog" is no longer running the US Military and that the US is finally pulling out of the Middle-East quagmire of Syria. These guys want War All The Time and are convinced the American People don't really care about our troops in the sand.

Talked to R Senator yesterday who is not prone to hyperbole. In the course of our conversation on the departure of Mattis he said twice: “We are in peril”. Many in DC, including Rs, now unsure if administration can be relied upon to carry out its most basic nat sec duties.
— Michael Gerson (@MJGerson) December 22, 2018

Yes, Jim Mattis resigned and penned a letter outlining his thoughts and, I suppose, disagreements with the President on world affairs and our national defense in light of changing directives.

"My views on treating allies with respect and also being clear eyed about malign actors and strategic competitors are strongly held and informed by over four decades of immersion in these issues," Mattis wrote in his resignation letter to Trump.

Is the general talking about "allies" like the Kurds who've been helping us fight ISIS in Syria but don't, in fact, have an established country or is he talking about Allies like Turkey which is a member of NATO and will be taking over US duties in their back yard?  I don't know and no one else does either but let's face the fact that the man is a card carrying member of the "military-industrial complex" that another general war hero patriot warned the nation about in his own Farewell Address to the Nation and on that point I'd like to quote a different, rarely commented upon, section of that Eisenhower letter:

Akin to, and largely responsible for the sweeping changes in our industrial-military posture, has been the technological revolution during recent decades.

In this revolution, research has become central, it also becomes more formalized, complex, and costly. A steadily increasing share is conducted for, by, or at the direction of, the Federal government.

Today, the solitary inventor, tinkering in his shop, has been overshadowed by task forces of scientists in laboratories and testing fields. In the same fashion, the free university, historically the fountainhead of free ideas and scientific discovery, has experienced a revolution in the conduct of research. Partly because of the huge costs involved, a government contract becomes virtually a substitute for intellectual curiosity. For every old blackboard there are now hundreds of new electronic computers.

The prospect of domination of the nation's scholars by Federal employment, project allocations, and the power of money is ever present – and is gravely to be regarded.

Yet, in holding scientific research and discovery in respect, as we should, we must also be alert to the equal and opposite danger that public policy could itself become the captive of a scientific-technological elite.

It is the task of statesmanship to mold, to balance, and to integrate these and other forces, new and old, within the principles of our democratic system – ever aiming toward the supreme goals of our free society.

The task of integrating the Sci-Tech Elite with the "principles of our democratic system" has been a complete failure. These people have no interest in the "supreme goals of our free society" and they use their position of power to undermine these "principles" and "goals" at every opportunity.


Because the Sci-Tech Elite have made it that way and now is the time to stop them - It's time for We the People to Make America Great Again.