Allegedly the first shot was fired during a "contentious phone call with Canadian Prime Minister Justin Trudeau about tariffs Trump is imposing on the US neighbor to the north." A phone call between two leaders of long time neighboring countries with HUGE cross boarder trade and shared national interests - like the Stanley Cup. What did it sound like on May 25, 2018 when the war began? Something like this:

"Didn't you guys burn down the White House?"

You almost have to feel a little bit sorry for Justin and Canada because this one was a real zinger or a "head shot" as the pundits like to call them. How do you know? Because CNN published a correction (a retraction really) on behalf of the POTUS the day after the news broke in a wonderful piece titled "History according to Trump, War of 1812 edition." Behold:

"Yes, there's a kernel of truth here, since a lot of Canadians seem to think it was Canadians who burned the White House. Also, the British burned Washington after American troops burned government buildings in what's now Toronto.
The war was fought in large part over Canada.
All true!
But it was British troops who burned Washington."


Which is exactly the point. Justin Trudeau's ancestry is very French Canadian (unless it's not) so using the term "you guys" to a Québécois will sting - especially because it's true. Technically speaking, Queen Elizabeth is the Sovereign of the parliamentary democracy and constitutional monarchy of Canada. The sun never sets on the British Commonwealth and for Canadians to claim they're NOT British is an example of self delusion that dwarfs US domestic squabbles about the Confederate Flag or sovereignty of our southern boarder. But delude themselves they will - check out this informative nugget from Canada's state run broadcasting corporation.

A quick War of 1812 history lesson, in case there was any confusion. pic.twitter.com/Yt2atvbRk1
— CBC News: The National (@CBCTheNational) June 9, 2018

The war of 1812 didn't end America's relationship with Canada and there are people, even some (many?) Americans, who love constitutional monarchy above all political systems and, though they don't admit it publicly, many of our popular politicians promote the concept in their campaigns (well, some ARE public about it). But it did convince the British that the USA was for real and, though we were only on our 4th POTUS, the fledgling republic was not going to kneel to any monarch and the US/Canadian boarder has been pretty stable since Treaty of Ghent. The British wanted to keep their holdings in the new world and the best way to do that was by working with the US and being friendly trading partners (and more as it turned out - "special relationship" and all that).


Twenty bucks on this side of the International Boundary tells a different story and displays the rugged face (scared at age 13 by a Red Coat) of POTUS #7 on one side and a picture of the mansion the Canadians burned to the ground risen like a phoenix - "IN GOD WE TRUST" - in glorious victory. Old Hickory fought to create the union as a boy, fought to defend the union as a soldier and fought to preserve the union as president. He was the embodiment of America first and, as it happens, he appears to be a favorite of POTUS #45. So when it comes to trade disputes, tariffs, paying what's owed and the like it is instructive to look to Jackson's approach to see where we might be heading with Justin Trudeau or any other leader of a G7 country and for that we'll turn to The Miller Center at UVA.

"Late in Jackson's presidency, however, an unseemly dispute with France nearly brought the two nations to the brink of war. In an 1831 treaty, France agreed to pay claims for Napoleonic depredations on American shipping. Nevertheless, the French Chamber of Deputies refused to appropriate the necessary funds. Jackson finally lost patience and asked Congress to authorize reprisals if the money was not paid. The French government then demanded retraction of this insult as a condition of payment. Jackson responded in effect that what he said to Congress was none of a foreign government's business. The impasse deepened through 1835: ministers were recalled and military preparations begun. Finally, under British urgings, the French agreed to construe a conciliatory passage in a later message of Jackson's as sufficient apology. France paid the debt and the crisis passed without repercussions."

I think it's time for Justin and Angela and Emmanuel to start "construing" things differently because the war that mattered didn't happen in 1812 or even 1776 when it comes to their current crisis. The war that mattered is what we in the USA call the The French and Indian War and what everyone else calls the Seven Years' War 1754–63 which pitted European powers fighting out their differences here in the New World. That war ended and the Americans hacking out a living in the North American wilderness got to thinking long and hard about what it meant and what they wanted their new life to be like. Did they want to import the squabbles, intolerance and persecution from the old country and set up the same bitter, oppressive, impoverished and constantly waring political structure they'd just escaped by crossing the Atlantic? No. No they did not and in a little over a decade 13 of the colonies banded together to cast off the past and start anew. That's why it happened and that's how it all got started and no matter how hard Europe has tried to destroy our experiment in representative democracy they have never yet succeeded. Wrapping the USA up in the post WW2 financial aid and playing the Russia card since 1945 has kept the New World bound to the old through trade and military alliances but 70 years is enough. 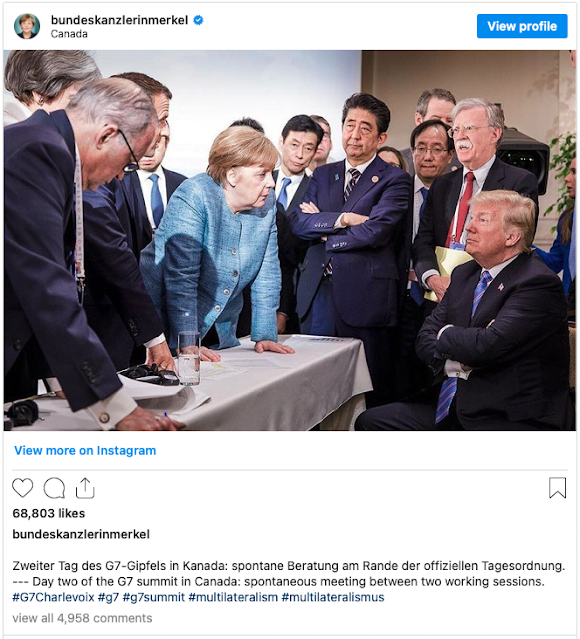 Angela posts a photo to show how impossible her situation is - how depressing - and she has many sympathizers but  I'm looking at two guys* who are focused on a $10 Trillion rebuilding of North Korea and don't see any value in propping up EU socialism. Merkel and her old country compatriots better start looking for the conciliatory language in Trump's tweets because they've got seven more years of this and it's a war they can't win.

*Note: They're the ones with their arms crossed.