Hail hail to the good times

November 20, 2017
Malcolm Young died last Saturday at the age of 64 and I believe he squeezed a lot of life out of those years. AC/DC is always referred to as an Australian band but the Young brothers were born in Scotland and though they did emigrate down under as tykes they carried a lot of Glasgow right along with them (Bon Scott was also a Scottish immigrant) .


Malcolm Young, who has died aged 64 after suffering from dementia, was the driving force behind AC/DC, the rock outfit that sold more than 200m albums over 40 years to become one of the highest-grossing bands of all time. His brother Angus, the band’s lead guitarist, may have been the most recognisable character in AC/DC, largely thanks to his habit of wearing school uniform on stage, but it was Malcolm whose inventive rhythm guitar and storming riffs formed the backbone of the band’s sound. Malcolm often took the crucial decisions about the band’s strategy, and he became notorious for abruptly firing various managers, producers and band members.

You read that right. 200m (m as in Million) records. In America Back in Black is the 6th most purchased album of all time, but World Wide we're talking huge numbers. It's a long way to the top (if you wanna rock 'n' roll) and Malcolm Young made it to the tip-top. These lads pushed a lot of vinyl over the years and breathed the rarified air of Michael Jackson, Pink Floyd and Whitney Houston which isn't bad for a pair of 5' tall factory workers from Scotland - not bad at all.

But to what end? 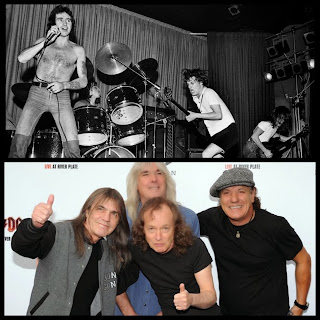 It's not like Malcolm Young will ever make it onto #RockStarMountRushmore and all that rock'n and roll'n cost him his mind and life before he could start cashing his social security check. Oh well, the joy is in the journey, as they say, even if that journey is along the highway to hell. R&R is a Young mans game and as they age these Rock Stars loose the testosterone that puts the TNT in their sound. The spirit of the thing diminishes once you've played Shot Down in Flames for the 50th time, the 100th time, the 1000th time - hey man, it's a job. And as you age the job gets harder and harder to do even if you become more practiced and "professional" the energy isn't there anymore and even if you can summon the energy using chemicals or some insane workout/dietary formula you still look stupid with your thinning hair and old bones gyrating on stage like you don't even know how old you are. It's sad to see these rock n' roll stars die young but it's even worse to see them age and refuse to give up the stage to younger more dynamic acts that make the music the way the music is supposed to be made - full of piss and vinegar. The young AC/DC (with Bon) was what it's all about, but that was 40 years ago and all those millions of records sold can't change the truth.

Rock n' Roll lived for about 10 years 1957 - 1967 and everything that followed was derivative vultures picking at the carcass.