August 21, 2017
Here in Central VA we had our total eclipse a few months ago with a shoddy Mulligan a little over a week ago. So the shadow of today's penumbra was pretty weak tea in comparison to the grind I've grown accustomed to. Honestly, the longer this insanity goes on the more I relate to Barron Trump - he seems to have exactly the right attitude and I truly admire his swagger. Check out this clip:


Just kick'n back in his chino's and polo shirt along for the ride of a lifetime. Living LARGE and in charge dressed in white in defiance of the moon. Awesome!!! 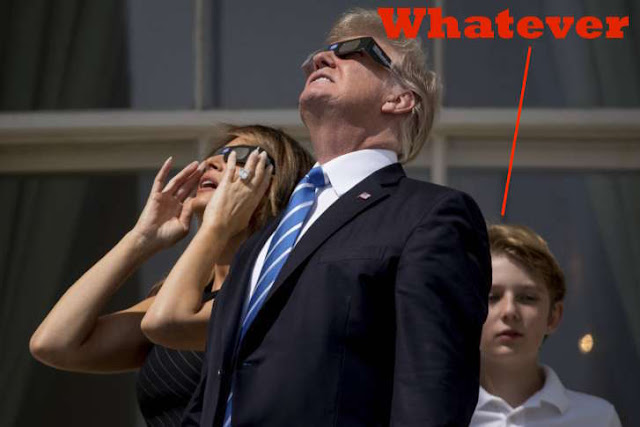 Yeah, it comes around every once in a while but that's just an illusion of living on planet earth because there's an umbra somewhere in space ALL THE TIME but when our planet passes through its path everyone's got to get out their glasses and take a look. Why? The Scientific American tries to explain:


"It is an interesting coincidence that the Moon should so nearly perfectly blot out the Sun, since there is really no physical reason why this has be the case. The Moon happens to be about 400 times smaller than the Sun, but the Sun happens to be about 400 times further from the Earth than the Moon is. So simple geometry tells us that the apparent disk of the Moon is almost exactly the size of the apparent disk of the Sun."

A coincidence? I don't think so and neither does Barron.