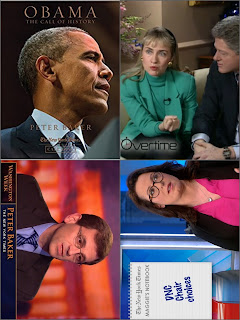 With every passing day the reality of POTUS DJT sinks deeper and deeper into the fractured psyche of the deep state, but the question remains - how deep is the deep state? Because no matter how deep the Trump bunker buster burrows it's way into their mind, they still can't (won't) believe it. One of these days he's going to explode and then all hell is going to break loose, but so far he's been playing nice and trying to negotiate with them. I appreciate the presidents restraint and believe there is good reason to keep his powder dry because a hard rain is coming and he'll need all he's got (and then some) to fight off the swamp critters when they slither toward 1600 Penn. Ave. To get an idea of how fucked up his opposition is one need look no further than the NYTimes weekend missive "The Election Is Over, but Trump Can’t Seem to Get Past It" by Peter Baker and Maggie Haberman. Got that? Trump can't seem to get past the election - Trump? Peter Baker, author of “Obama: The Call of History,” an illustrated history of the 44th president produced by The Times and Maggie Haberman graduate of Ethical Culture Fieldston School in Manhattan and trusted scribe of the Clinton campaign think Trump can't seem to "get past" the election. Hey, Peter - hey, Maggie, I've got some "news" for you - Trump is way, way past the election. He's sitting in the OO telling secrets to the Russians dontcha know.

At the root of Mr. Trump’s unpredictable presidency, according to people close to him, is a deep frustration about attacks on his legitimacy, and a worry that Washington does not see him as he sees himself.
As he careens from one controversy to another, many of them of his own making — like his abrupt decision to fire the F.B.I. director, James B. Comey, who was leading an investigation into the president’s associates — Mr. Trump seems determined to prove that he won the election on his own. It was not Russian interference*. It was not Mr. Comey’s actions in the case involving Hillary Clinton’s emails**. It was not a fluke of the Electoral College system***. It was all him.

Well, the cold hard fact of the matter is - IT WAS ALL HIM. What these two partisan hacks can't accept and will never report is the greatest untold story of the Trump victory in 2016 and if they don't know it, you can bet that every professional politician in Washington DC knows it and fears it. I'm talking about winning the thing at all - how the hell did Trump win it at all even with Russian "hacking" (whatever that is) and Comey talking about a server and emails and no voter fraud tilting the electoral college? There has never been a candidate that's been so completely lambasted by the press in modern American history - by all traditional measures Trump should have pulled a Ross Perot 17% of the vote and skulked back into his tower. But that's not what happened Peter and Maggie, even with all the work you did to discredit the Elvis from Queens (work that certainly cost him at least 10 points in the final tally) he still beat Her. Anyone with eye to see could have predicted Trumps victory (I did) but they wouldn't see and they still don't see.

Just imagine what the vote in November would have looked like if the NYTimes and its reporters and all the other newspapers and cable news networks had just "played it straight" and reported the days events as though two duly elected leaders with opposing policy platforms were engaged in a contest to win over voters. No editorials disguised as news stories, no loaded words, unflattering pictures, insults and innuendo - just hard news. Trump wants to build a wall and Hillary doesn't. Trump wants to end Obamacare and Hillary doesn't. Trump wants to spend more on our military and Hillary doesn't. No drama, no choosing sides and writing like the American civilization depended on defeating Trump but rather, an honest presentation of his positions in relation to Hillary's policy. Trump would have won 65% of the vote nationwide and he would have steamrolled the capital with an FDR sized mandate from the people. The election didn't turn out that way because of the dishonest, #FakeNews, enemy of the American people news media that still Can’t Seem to Get Past It and probably won't until Trump pulls out the launch codes and fires off a nuke. Could happen any day now.