a harbinger of failures to come

March 27, 2017
It has been pointed out on this blog in the past that failure is not a bad thing and, in many cases, should be viewed as a wonderful experience (granted, that's hard to do) as it provides painful guidance on how to improve your "game", as they say, for the next time you attempt to do something. People who have never failed (if there are such people) have never tried to do anything and the more difficult the undertaking the more frequent the failure will be - so honesty and persistence are key elements of long term success in the face of inevitable failure. The implosion of the American Health Care Act of 2017 is viewed, almost universally, as a crushing failure for the GOP, Trump and the Speaker of the House with friend and foe alike casting blame and "explaining" why it happened and what "lessons" might be learned from its failure. Case in point is Byron York's 14 "lessons":

The Obamacare train wreck was a failure for President Trump and a disaster for House Republicans. That is, it was worse for Republicans, because they had been at it for so long, but it was plenty bad for Trump. When Speaker Paul Ryan pulled the GOP repeal-and-replace bill Friday afternoon, he said, "We will need time to reflect on how we got to this moment." For that reflection, here, in no particular order, are 14 lessons from the Obamacare debacle:

Thus begins a list of conventional wisdom bromides - all good, I'm not saying he's wrong - with one glaring omission that we'll call lesson #15 for simplicity. Now lesson #15 is well known to anyone who reads the KOTCB blog and was hammered home 2 years ago when Chief Justice Roberts closed the book on Obamacare griping in June 2015 with his King vs. Burwell decision. That lesson, in short, is that the GOP was working right along with the Democrats in the passage of Obamacare and did not stop it at the time of its passage (which they could have done) and have NEVER intended to overturn this hideous piece of "legislation" no matter what lies they've told to the American public over the past 7 years. If it took a public humiliation for the president and "his" congress to impart this lesson to the disgruntled people of this land, a majority of whom have NEVER liked this law, then that is the stiff price the task of teaching requires. The ACA (Obamacare) is not going to be repealed and it's not going to be replaced but it might (just might) get eviscerated by the current Sec. of HHS, Dr. Tom Price, and processed into an edible pork product like bacon, ribs and BBQ.


But even as Congress spins its wheels, Price can push forward by using his discretion to undo crucial elements of Obamacare. That’s largely thanks to the Obama administration, which granted its health officials authority to write and implement hundreds of rules tied the law. The Trump administration now plans to use that same license to undo as much of Obamacare as it can.
“The statute itself gave [HHS] a lot of discretion,” said Edmund Haislmaier, a senior research fellow at the Heritage Foundation, who worked on health policy for the Trump transition team. “Live by the administrative state, die by the administrative state.” 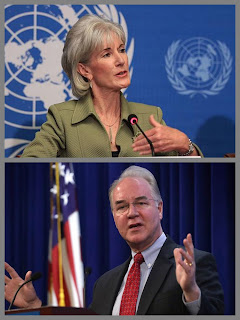 So another lesson, yet to be learned by everyone crowing about the "failure" to repeal and replace Obamacare, is Live and let Die. The "law" as written kind of assumes a nanny state HHS Sec. (i.e. Kathleen Sebelius) would be running the show forever and if HRC had won the presidency that is, in fact, what would have happened - but she didn't. So now the scalpel is in the hands of Dr. Price and I expect to see a lot of blood splashing on the floor and sprinkling the walls as he goes to work carving up the beast. Some might call this a failure of imagination on the part of the ACA defenders on the Hill because more damage can be inflicted on their pet projects and their required taxes with the law intact than could have been accomplished had the AHCA (Trumpcare or Ryancare take your pick) passed out of the House and on to the Senate where we would have had another month (at least) of "the worlds greatest deliberative body" grandstanding and lying to anyone who would listen until they, at long last, killed the repeal and replace legislation themselves. Who needs it? Certainly not Trump and his people who would be consumed with DC shadow theater for months when everyone on the inside knows how the play is going to end. If this is failure then I hope there are many more failures to come in this presidency because the results are fantastic for America and the truth.