Onderdonk will FERC your dam Butte 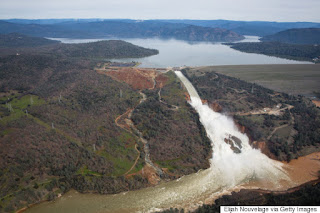 Natural disasters or acts of God as they are sometimes called often serve as a way to evade the influence of human hands when long foreseen, and perfectly logical, tragedy strikes. Hurricanes wipe out communities in south Florida but, of course, people are not meant to live in south Florida in the first place. Fires and mud slides destroy the Malibu bedroom communities but, of course, houses should not be built on the Malibu hills. It's like this all over the country (all over the world really) when people live and build against nature and, eventually, nature shows them the error of their ways.

So it is with the Oroville dam and the terrifying events transpiring over the past few weeks as rain, sweet rain (and snow) poured down on parched California soil. 7 long years of draught erased in a months time with buckets of water rolling into the Golden State's many reservoirs and rivers filling them higher and higher and higher. Uh-oh, too much water - not that you weren't warned.


The groups (Eco-warriors) filed the motion with FERC, the Federal Energy Regulatory Commission. They said that the dam, built and owned by the state of California, and finished in 1968, did not meet modern safety standards because in the event of extreme rain and flooding, fast-rising water would overwhelm the main concrete spillway, then flow down the emergency spillway, and that could cause heavy erosion that would create flooding for communities downstream, but also could cause a failure, known as “loss of crest control.”

FERC ran it by the CA State Department of Water Resources (DWR) who in turn ran it by all the municipalities and their associated agencies who actually use the water from the reservoir the Oroville dam created back in 1968.

Guess what, none of those agencies wanted to pay for repairs or improvements to the dam so the DWR told FERC that everything was cool and don't worry about it - not enough money to repair a dam holding back an ocean of water. This year "the Governor’s budget includes a $3.1 billion cap–and–trade expenditure plan" instead of functional stuff like dam maintenance. So good luck you fine citizens of Oroville who are fleeing your homes and businesses because your compadres in SoCal couldn't care less and no one in the media or government can decide on who's to blame for your situation.

This travesty puts a question mark and exclamation point at the end of Good Government?! because as a tax paying, water drinking, showering, swimming pool splashing subject of the state you've got to ask yourself, "what am I getting for all this money?"

That 13.3% is on top of Federal Taxes and the California legislature is constantly looking for new ways to tax (even sugar water) to make life better for its people - but... but the state that does everything gets distracted and overwhelmed letting critical function and responsibilities - things only the state can do - like maintaining a gigantic dam (a dam the state owns!) and preventing it from overflowing and submerging the communities downstream. But why do any of that hard budgeting stuff when you can just petition the POTUS and ask the other 49 states to pitch in and solve a problem you were too oblivious, lazy or miserly to fix yourself?


California Gov. Jerry Brown defended the state's handling of the Oroville Dam crisis as he waited to hear from the president on his request for direct federal assistance for the emergency.
Also, Brown welcomed scrutiny after revelations in recent days that there had been warnings more than a decade ago about the troubled emergency spillway.

As far as Gov. Moonbeam is concerned this is Trump's problem now - Give us money to fix the "emergency". You want to look at what happened to get us to this emergency? Fine - look all you want because you'll never find an answer or a person willing to take responsibility for this act of God. It's out of our hands and beyond the scope of our annual budget process.


The governor added: "We're in a very complex society where things can go wrong, and when they do they ripple out and effect hundreds of thousands and in some cases millions of people."
"We'll get a lot of eyes on the problem now that we have a problem," said Brown. "The problem is big and we're responding."

Yes, the problem is big - VERY BIG, but I'm not talking about the Oroville dam and, honestly, I've got no idea what Jerry Brown is talking about. He's the frigg'n Governor of the largest state in the USA! A GDP that would make it the 7th most vibrant economy on earth were it's dreams of secession to come true. The FERC was alerted to the dangers of the natural "second" spillway in 2005 (12 years ago!) and why is that important? Because "FERC issued the original power license for the Oroville facilities in the late 1950s but the license expired Jan. 31, 2007; relicensing proceedings are still pending." What?!!! You mean to tell me that for the entire Obama presidency this dam has been generating electricity without a license?!!! Who's in charge of this "very complex society?"
Answer: Gov. Jerry Brown, the US Department of Energy and acting Secretary Grace Bochenek (+ Ernest Moniz and Steven Chu) and a FERC civil engineer named John Onderdonk who wrote a memo in July of 2006 telling everyone that might care, which is nobody, that everything was fine with the secondary spillway.

I'm no engineer and I'm not in any position of authority in the California or Federal government but I do know a little bit about dams and can look at the terrain and to my eyes it's obvious that the secondary spillway is not stable. The fact that basic infrastructure, upon which the lives of tens of millions of people are dependent, is not considered a top priority for the State of California and the Federal Department charged with dam and energy oversight is a BIG PROBLEM. It should be a wake up call to everyone that expansive (and expensive) government that meddles in everything it can imagine needs meddling in will, as every meddlesome person knows, miss the big problems that need to be solved. "Things can go wrong" as the Governor say but some things like a gigantic dam CAN'T go wrong and governments are created and funded to make sure they DON'T go wrong. The fact that it IS going wrong is an indictment of everything Jerry Brown believes, preaches and practices so who will get the blame for this "thing" when the fingers start pointing? If I were John Onderdonk I'd already have my bags packed and booking ticket to some country without extradition agreements to the USA.