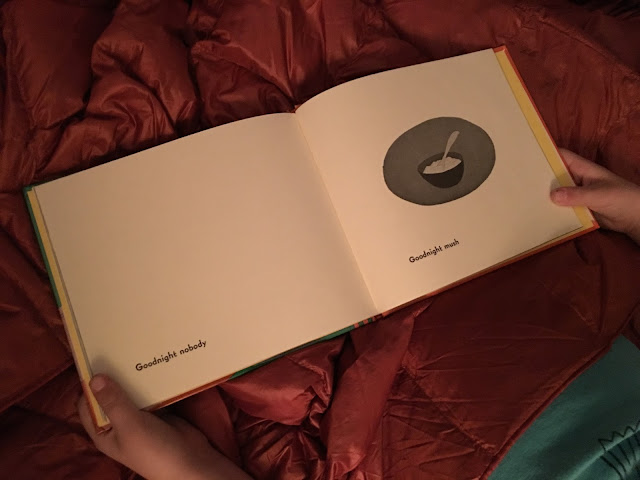 There's a new bio of Margaret Wise Brown titled “In the Great Green Room” and it sounds like an interesting read. It is fascinating to examine the artist in reflection of the art they create and often, as in the case of MWB, it seems inconceivable that such a person could make a timeless work of fiction - but she did. "Goodnight Moon" is one of those books that grows on you over time and though I've read it a hundred times (probably more) to my children, just as it was read to me, I'm starting to think that it was actually written for adults to invoke nostalgia for childhood. Children like the rhymes and bold pictures but parents LOVE it and for good reason. The book starts by setting the stage with its kittens and mittens and old lady whispering "hush" then starts systematically goodnighting all of them into the oblivion of a sleepy dreamworld. The Goodnight nobody, Goodnight mush pages are pure genius in this context and they delight any reader with their childlike derangement of an orderly process. Children always smile and parents remember what it was like to be a child with a clean slate and no rules.

I was thinking about that tonight as I watched president Obama give his farewell address to the country from his adopted home of Chicago, IL and how free and easy he appeared to be while speaking. As we all know by now, Barack can deliver a speech with the best of them and though the KOTCB blog has criticized many of his drone strikes I have to say that tonights effort was pretty much the best thing he's done in years. In fact, while I was watching him there was one question that kept coming to my mind over and over again - "Where has this guy been for the past 8 years?" I don't mean the policy stuff which I regularly disagree with FBPOTUS on but on the big ideas stuff which he hit home runs on all night long tonight.


Why did he wait to say all this with only ten days left in his presidency? Why didn't he act like this when it actually mattered? Maybe, like Margaret Wise Brown, the author is nothing like the words that he writes or maybe this is his way of saying goodnight to the game of politics and his empty (or soon to be empty) legacy so as to leave on a high note. He either doesn't believe a word that he said tonight or he's incredibly unskilled in implementing his ideas or, maybe just maybe, he's accepted the fact that Donald J Trump is going to be his successor but for what it's worth he's turning out the lights with a great speech of civic unity and American pride and for me that's worth a lot. Godspeed BHO and thanks for not blowing up the world while you were president (please don't do it in the next 10 days).

D.W.I. said…
The idea of Obama is brilliant and impossible to disagree with. The reality is Obamacare was the biggest tax ever laid on solely on the middle class. He doubled the national debt. Fracking saved the economy in its darkest years. And the middle east is worse now than when he took office (yes much can be blamed on W.).
9:10 PM