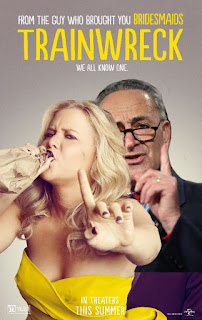 Far be it for the KOTCB to take issue with anyone mocking Beyonce and her Formation video but it is hitleryarious that Amy Schumer should be kicked out of the "entertainment" world for doing so. What with the long list of transgressions against decency and taste this stupid video parody has launched the #AmySchumerGottaGoParty. Amazing how the world turns and how fine the line between Feminist Hero and Racist can be.


"She’s been accused in the past for telling racist jokes, implying that black men are more sexually aggressive than others, and exploiting black women in her comedy. Some people (including Schumer herself) chalk up much of the criticism to internet call-out culture and political correctness. And though she’s seen as a feminist hero for many, the fact that the #AmySchumerGottaGoParty started trending at all is a huge indication that there’s still a large disconnect between Schumer and black women. Maybe in the future she’ll think of another, less tone deaf way to pay homage to King Bey."

Don't mess with The Shady Ghost in the Machine Amy Schumer because not even cousin Chuck can get you out of the hole if you piss it off. It don't care what you think or what the justification for your actions might be - grovel NOW or face the consequences of your disrespect. You think you can just ride your white privilege right on up to the awards stage and take home the fame and money but you will find yourself knocked off that high-horse and wallowing in the mud like a drunken whore if you don't get your mind right - and I mean right now. This is the world you made so live with it.
Clown Culture Music Phenotype