February 19, 2016
When passions and planning unite, a people and its institutions will fall into formation. Thats how artists make highly stylized music videos and stage performances with costumed dancers twerking in sync with the star. But to what end is the formation formed? In the case of one Beyonce Z it is to "reclaim" the word negro. Well, take it - it's all yours.

It's a far cry from the wonderful formations created by Motown legends The Spinners and the magical leads of Philippé Wynne who carved an indelible soul groove in my temporal lobe as a young pup tuning into AM radio in the dark hours post-bed time lights out.

Beyonce has been widely criticized for her video and Super Bowl (halftime) performance of Formation, while Kendrick Lamar has been praised for a more strident and defiant (one might even say antagonistic) performance of his "songs" at this years Grammy Awards* - why? Is it because she's a woman? Choice of venue? Wardrobe? 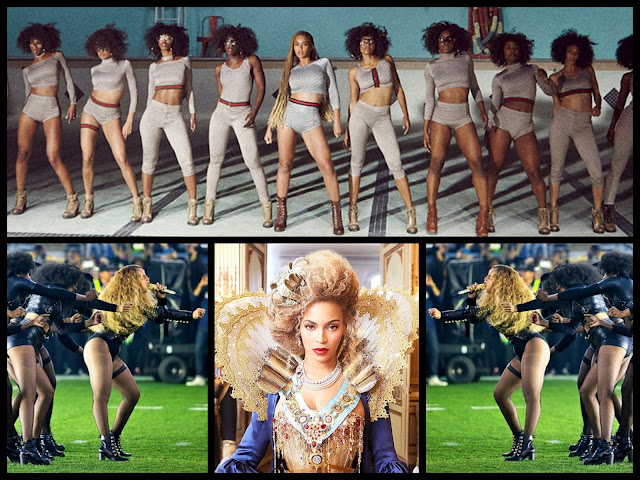 No, it's because Lamar is authentically, straight outta Compton, Black or African-American or whatever and Mr. and Mrs. Carter own something like 20 homes in Anywhere-but-Compton America. Kendrick Lamar ain't gonna be chatting it up with the future King and Queen of England and for that I'm thankful and support his endeavors, self defeating though they might be.

*Not since Three 6 Mafia performed "It's Hard out Here for a Pimp" at the 2006 Oscars has a more desperate cry for help been cheered by pampered helpers who aren't helping.