Martian in the closet 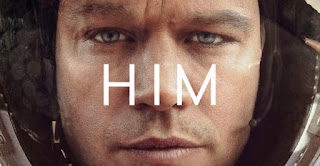 It's a very cold day in hell when this blog will defend Matt Damon, but today is such a day. The latest queer temper tantrum and fall-out that Matt is having with the gender Guardians is too much for me to bear. I know, I know - let him suffer. If anyone deserves this twisted gay hate retribution it's Matt Damon who's heterodox Hollywood leftist pabulum has dripped unfiltered from his puffy lips for almost 20 years. It's just that I don't play it that way, with very few exceptions, and I'm certainly not going to play it that way with this player. First off, before I say anything else, I have to give credit to the man for an unbelievable work ethic - acting in 70+ films/TV shows, producing 20 films, writing 4 scripts and literally hundreds of appearances on mindless talk shows and other promotional crap over the course of 20 years is impressive. Say what you will about his Commie ideology but this guy is living the American Dream, raking in green-backs and working his ass off. Impossible for me to have seen all of this product, and many of the efforts leave me cold - the Clooney, Soderbergh Ocean's series was dumb, Bourne was OK the first time but THREE! (now FOUR!!!), and leftist propaganda like Che and Promised Land is just too heavy handed for my taste - but almost everything is well crafted entreatment. More importantly, some of these movies are gems and his participation probably played a big part in getting them made - to choose a few at random:


With the exception of The Good Shepherd none of these are overtly political and TGS was quite complex in it's "message", such that it was. Honestly, the films greatest failing was Angelina Jolie as Matt's overwhelmed wife (bad casting), but I digress. The point is, I don't write off an actor, musician, playwright, mime or clown no matter what their personal or political views might be. I watch Woody Alan movies, listen to Streisand songs, read Stephen King stories because their damn good at what they do no matter how much stupid stuff they say when NOT doing what they do best. Matt Damon is no exception to this rule - though a full throated Knight of the Golden Circle - like Abe Lincoln, I look to the persons abilities and what they do well with the understanding that I must suffer what they do poorly as part of the bargain.


And I include playing a horny, drug addicted, money grubbing, plastic faced ninny named  Scott Thorson in HBO's gay propaganda bio-epic on Liberace titled Behind the Candelabra (95% Critic approval on RotTom). I mean, what does a guy have to do in this world to prove he's pro-gay enough? Shouldn't having sex with Michael Douglas win an actor some props in the LGTBYOB community? Answer: No. But the worst part of the whole thing, in my opinion, is that Matt Damon is right! The less the audience knows about the actor, the more mystery that surrounds the thespians inner workings and personal beliefs the better it is for the dramatic presentation and the viewing audience. Once these actors die and the truth of their screwed up morality and mentality is revealed in biography and documentary exposé it tarnishes what should be experienced as a singular piece of art. Why ruin everything while you're still alive and able to keep your debauchery securely locked away in the closet making the world a better place and improving your performance.

Most recently Matt has been spending a lot of time in outer space - Elysium, Interstellar and The Martian - and who can blame him for wanting to get off this planet. Maybe on Mars he'll be able to say what he wants without being labeled a hater.