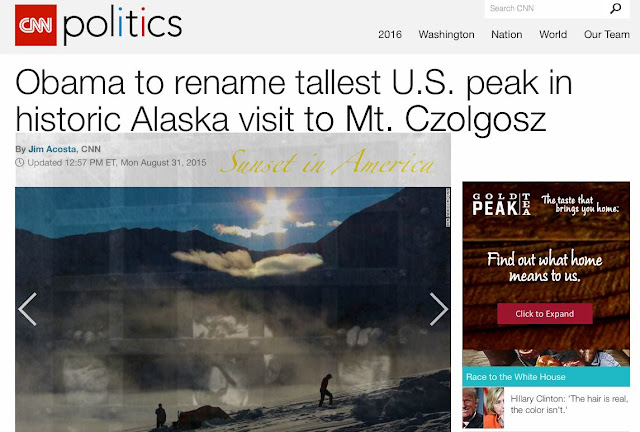 0 has traveled to Sarah Palin's back yard to yak it up about "climate change" and while packing his bags he decided to change the name of Mt. McKinley (Americas tallest mountain) - no biggie. Just another day in the transformation and what did that old guy McKinley do anyway? - so 19th Century. When he landed in Alaska the teleprompter was waiting:


“The time to heed the critics and the cynics and the deniers is past,” he told delegates to an international conference on climate change in the Arctic. “The time to plead ignorance is surely past. Those who want to ignore the science, they are increasingly alone, they are on their own shrinking island.”

Hay, that sounds familiar. You might say that I've been hearing that speech my entire life. He goes on, “If we do nothing, temperatures in Alaska are projected to rise between 6 and 12 degrees by the end of the century." So by 2100 the average high temp in Alaska in September will be 67 degrees - that sounds almost livable. I'll be able to leave my own shrinking island and relocate to Mt. Czolgosz.