June 20, 2015
My 7th & 8th grade science teacher was a wonderful man - a naturalist from the old school. He f'n loved science, though he would have despised the casual profanity in the now common expression - being a religious man, member of the church choir and forthrightly pious in the best Christian sense of the word. He had a wonderful sense of humor and loved to engage his students in discovery and scientific experimentation but if he caught one of them scribbling on their desktop (me for instance) he'd whack them HARD across the head with his big open palmed hand. He was a lifelong and committed Democrat and got our school invested in Recycling Programs, tree planting, roadside trash pick-up drives and all the 1970's eco-fads that swept grade schools across America. I loved him, as you can imagine, even with (or maybe because of) the occasional corporal punishment that would probably get him arrested in today's educational environment. He instilled in me a great love of science and a short temper for bullshit. 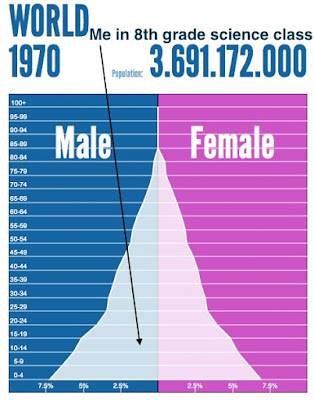 In those days world wide population growth was a big concern and it was projected, by scientists, that all our natural resources would be used up in the not to distant future. We've grown from 3.5 Billion to 7 Billion+ souls on the planet today and for some that's too many - it was too many THEN. Never mind that it's the world's biggest lie - Malthusian Doom! was the scientific certainty of my young adulthood and, unfortunately, it's never really been euthanized - probably never will be - because, like all doomsday prophesy, it's impervious to reason or just plain old empirical evidence. In other words, it's unscientific science which is emblematic of so much of the "popular science" humans must slog through in the modern world. By the time the 1990's rolled around and (surprise, surprise) the Earth was still alive, teaming with people who lived longer and ate better food than all the people in the recorded history of humanity a new fetish called Global Warming caught the scientific worlds fancy. You might remember a divinity student turned politician by the name of Albert Gore Jr. who, in 1992, wrote a book about it titled "Earth in the Balance" which you can buy for 1 cent at Amazon.com (assuming you take the time to find it, buried as it is in the digital landfill of Jeff Bezos' cyberpatch - it's right over there, beside "Joined at the Heart: The Transformation of the American Family" which Al wrote with his wife at the time [now ex], Tipper) and please read the Amazon reviews like this one by Steven H Propp (not making up the name, here's proof).

Mr. Propp sums up Gore's intro to EITB like this: "He (Gore) wrote in the Introduction, "Writing this book is part of a personal journey that began more than twenty-five years ago, a journey in search of a true understanding of the global ecological crisis and how it can be resolved... it has also led me to undertake a deeper kind of inquiry, one that is ultimately an investigation of the very nature of our civilization and its relationship to the global environment... At some point ... we lost our feeling of connectedness to the rest of nature. We now dare to wonder: Are we so unique and powerful as to be essentially separate from the earth? Many of us act---and think---as if the answer is yes... I am convinced that many people have lost their faith in the future, because in virtually every facet of our civilization we are beginning act as if our future is now so much in doubt it makes more sense to focus exclusively on our current needs and short-term problems... we seem to share a restlessness of spirit that rises out of the lost connection to our world and our future." (Pg. 1-2) He adds, "The more deeply I search for the roots of the global environmental crisis, the more I am convinced that it is an outer manifestation of an inner crisis that is, for lack of a better word, spiritual." (Pg. 12)"

Speak for yourself Al, my inner spiritual crisis, like so many other people living on this earth, has little to do with the global environmental situation and much more to do with my back yard - maintaining the yard, dealing with snakes, picking up dog poop, spraying Round-up on weeds and toxins on wasps - I mean this both literally and metaphorically. But Albert Jr, being a chip off the old block, is always talking about "we" - the Royal We - and "we" were in for a lot more Goredoom.


By 2006 "An Inconvenient Truth" was unleashed upon the doubtful, short sighted world (TOMATOMETER 93%) and Al Gore was thrown money and adulation, but nothing changed. I wish Davis Guggenheim had titled his movie, which was as much about Al Gore as it was about "climate change" (the updated name for global warming), "Time Bomb" because "if the vast majority of the world's scientists are right..." 2016 is going to be the Apocalypse. 10 years ago, every schoolkid in America was told they had 10 years and now those 10 years are almost up. We laugh at "duck and cover" movies from the 1950's - imagine what our grandchildren will think of AIT and the Gore library of scary hokum that's been foisted upon a gullible and forgiving public. By 2010 (4 years into the Rapture) Gore gave one of the greatest commencement speeches of all time to his home state Tennesseans.

"Ice caps melting, once in thousand year events are occurring more frequently, sub-prime mortgage crisis, what were ya' thinking?"

It's going to take more than 10 years to wipe out planet earth and setting such a short time line is folly because with enough days, weeks, months and years those 10 years will eventually pass leaving the prognosticator looking like a fool. The famous OZ scientist Frank Fenner also gave a speech in 2010, but in it he predicted human extinction in 100 years and those 90 additional years makes all the difference. Who's to know what will happen in 100 years? No one now living will know weather Fenner was right or wrong - we've had 5 years of wrong, but we've got 95 more years of eco-horror to live through to get a definitive answer. David Auerbach uses Fenner's formula today in a clarion call for immediate action by someone, somewhere to do something. Pope Francis: Humans Are Turning the Earth Into an "Immense Pile of Filth" declares Mother Jones. And if you are skeptical of these claims you are termed a "climate change denier" which is kind of like being a cross between a Holocaust denier and a Flat Earth Society member. VP Joe Biden says climate change skeptics "don't even believe in gravity" - that's how stupid they are! Immense piles of sinful filth who won't deal with OUR spiritual crisis. 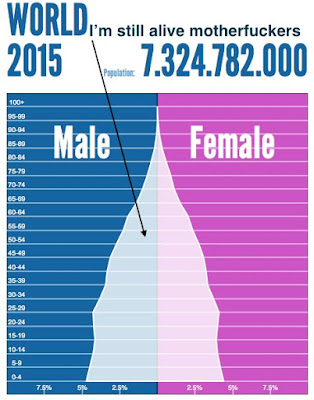 Well, it's true, I'm not going to deal with your crisis - I've been listening to your hysterical proclamations of doom since I was 13 years old and it's all a big hoax. I could go on for many paragraphs sighting scientific research that questions or flat out disproves claims made by the 97% of consenting scientist who echo the climate change crisis talking points but why bother.  I like global warming (a warmer planet is more hospitable to humans) and I don't care if it's caused by a natural event or man made mischief - it's good! So are fossil fuels which are efficient, easy to transport and plentiful. I like people and I'm amazed at all the wonderful humans I meet and share my life with. I believe in gravity but I realize that there's a lot about gravity that we humans still don't understand, like:

What is the identity of the dark matter?
It has been eight decades or so since astronomers began to notice that there is more gravity pulling stuff around out in space than there is visible matter able to produce such effects. Attempts to detect the supposedly exotic (as in, unknown) species of subatomic particle responsible for the extra gravity have been frustrating. Hints seen in some experiments have been ruled out by other experiments. I think there’s a missing piece to this puzzle, but it probably has nothing to do with game theory.

Eight decades?! Why, that's almost 100 years and we still explain the unexplainable gravitational activity in the universe by claiming that something called "dark matter" exists (even though we've never seen it or accurately measured it) and it's got to be out there - somewhere. According to Newtonian gravitational theory and Relativity the universe should be pulled apart and scattered (dark matter makes up 90% of the matter required to hold the universe together) but it doesn't happen. Why? Why does the center hold? Don't look to Al Gore or Joe Biden or even the Pope for the answer - follow my science teachers advise - do your own investigation and love God. 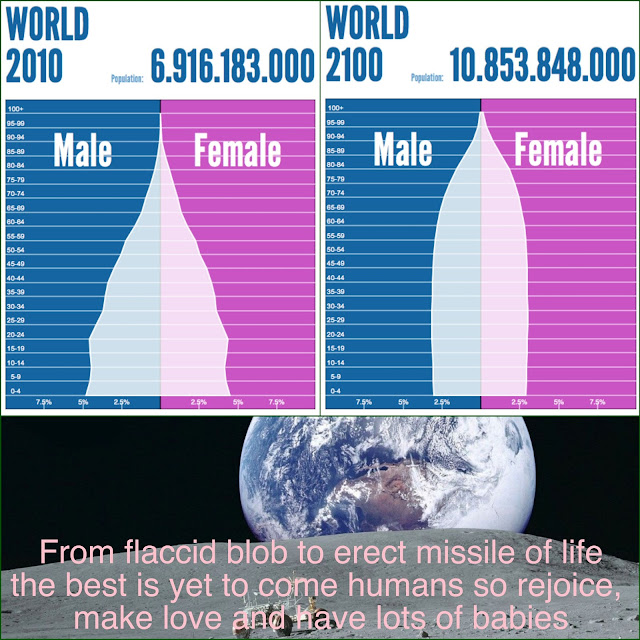 predicts humans will probably be extinct within 100 years, because of overpopulation, environmental destruction and climate change.

Read more at: http://phys.org/news/2010-06-humans-extinct-years-eminent-scientist.html#jCp
predicts humans will probably be extinct within 100 years, because of overpopulation, environmental destruction and climate change.