What time is it?

You're minding your business on West Pico Blvd. when some zonked beyond belief broad staggers into your shop, makes a mad dash to the water closet and pukes all over the toilet. The Agent Smith's in her security detail position themselves at the bathroom door and stand guard while the First Daughter-In-Law cleans the vomit off her face and arms. After giving you the nod to keep your mouth shut and clean up the mess these watchmen escort this unaccountable twist out the backdoor and into the society from whence she came. I'm not making this up - it just happened last night for real and I've got photographic proof of the aftermath (not that I needed any) for all you "show me the proof", "I haven't seen any evidence", "it's probably Russian disinformation" ass-holes who NEED "proof" for every obvious thing that ever happens in this life. You might be one of those people and if you are I'm glad you stumbled upon this KOTCB blog because I have proof for almost every opinion, accusation and prognostication I make and even when I don't have proof I've got something better - intuition.
You see, there's a problem with proof and the mistakes people make when false and conniving "proof" is presented to them with a maddening and evil (there's no other word for it) self-assurance. Don't just accept the proof without looking deeper and weighing the truth of any evidence by the intuitive light the radiates from your soul. The Bard conjured the tale of Cymbeline to impart this important lesson through Posthumus's base jealousy and betrayal of true-hearted Imogen due to his eronious belief of Iachimo's seductive proofs. Treachery is everywhere and for all time so when 50 former intelligence officials claim that the contents of Hunter Biden's laptop is probably Russian espionage and disinformation designed to sabotage Jo(((K)))e Brandon's presidential aspirations just remember the name Melissa Cohen. She's no Imogen but the South African filmmaker is what We the People will have to settle for as the current unpleasant drama plays out in Washington DC. 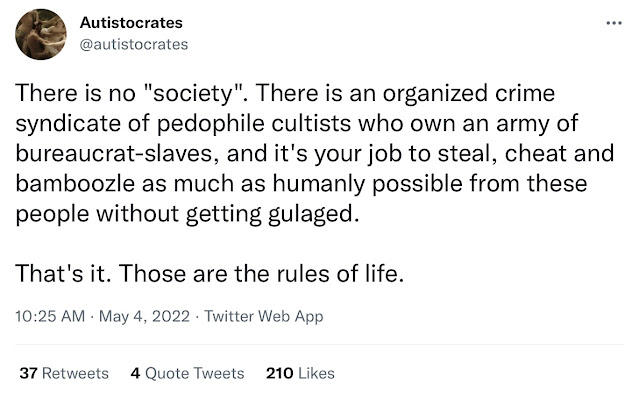 Are you a person who knows what time it is? By that I mean, do you need a watch or iPhone or television bug in the lower left corner to "prove" that it's 6:29 PM PT or can you just pretty much estimate that it's about 6:30ish? I'm the kind of guy who just sort of knows the time and I never wear a watch - haven't for decades - because I don't really believe in time as we measure it in the modern world. But I'll tell you something kind of funny with regards to Hunter's laptop and the gigabytes of "compromise" proof that is stored on it (not by Russians) and available for all to see (including the FBI since Dec. 2019) and that is this - everyone in the DC Swamp has a laptop. I mean, you start publishing people's laptops and all hell is going to break loose and do you, dear reader, think that Hunter Biden is a one-off, a bad apple, an anomaly among the nepotistic thieves public servents who "represent" the saps voters of this once great nation? Your leaders and their #FakeNews media ass-lickers don't want to have all their bribes and porn splashed across the screens of America because it's bad for business. Corruption and foreign influence peddling doesn't disqualify the Biden family from high office - this vice and treason is THE REASON they got tapped for the job.
The Situation in Ukraine
And it's not just the dingy bag-man from Delaware who's compromised and controlled - it's about 2/3 of everyone on The Hill. These people just voted to send $40 Billion to Ukraine for war with Russia (and for other purposes). H.R.7691 - Making emergency supplemental appropriations for assistance for the situation in Ukraine for the fiscal year ending September 30, 2022, and for other purposes. You might have heard about "the situation in Ukraine" which has been going on since February and, thanks to Congress, doesn't look like it will be ending any time soon. Not that Congress, by which I mean the political body comprised of "elected" representatives, has any idea what "the situation" is or where the $40B just appropriated will be going - they didn't even read the legislation! It's hard to get too worked up over congressperson X who is no more responsible for his/her actions than Hunter Biden's wife. First time readers of the KOTCB blog will probably want proof for that assertion so if you scroll to the General Provisions section of the Act you'll find this:
And the NSA Act of 1947 has this interesting clarification:
The first order of business in section 504(a)(1) of the NSA Act of 1947 as amended in 50 U.S.C. 3094(a)(1) passed into law in August of 1991 is this:
Why is that important? Well, the Hughes-Ryan amendment required the President of the United States to report all covert actions of the Central Intelligence Agency to one or more Congressional committees. So if you know how to read the evidence you'll have "proof" that the politicians in Washington DC take their orders from whoever is receiving this money (that would be the IC) through the National Security Act and a common citizen subject is of no consequence to lawmakers from either political party. It's a rigged system, sure, but it's far beyond rigged - it's completely unaccountable and directed by unknown authors putting on a show. It is time... It is long past time to pull back the curtain and see who's producing this fiasco.