The bank of justice is bankrupt.

One of the first "politically aware" moments in my life occurred in 1991 when President Geo. H. W. Bush nominated Clarence Thomas to replace retiring Justice Thurgood Marshall on the Supreme Court. I'm not a lawyer and I didn't care about SCOTUS rulings at the time or the ethnographic/religious makeup of the High Court or Marbury v. Madison or any of that crap I'd learned in American History 101 - but I did care about a guy getting denied a job promotion for the "crime" of making a joke about a  pubic hair on his can of Coca-Cola. Oh, I believed Anita Hill all right, but I didn't believe that anything she said about Clarence Thomas disqualified him from being a judge and, at my relatively young age, I really got myself worked up over the high tech lynching of this share cropper's grandson. I was living in DC that summer and followed the scandal from the start when Nina Totenberg broke the sexual harassment allegations over government radio (NPR). Decades have past and the intrepid "reporter" recounts the Realpolitik of the moment:

"Well, I think Republicans thought Thurgood Marshall, one of the great legal figures of our times and the first African American to serve on the court, was resigning, and that you could not replace him with somebody who was white. It would make the court back into an all-white institution. You just couldn't do that."

No, you can't pick a white guy because... because you just can't do that so Bush served up Constitutional Conservative Afro-American and (you probably already know this but) you can't do that either.

You can't do that because there are only 9 seats on the Supreme Court and that means only one black guy (or gal) at a time and if, as was the case for Justice Thomas, that man lived another 30+ years it would effectively close the top dog opportunity for ALL negro judges in America for two generations. So the (D)'s fabricated the Anita Hill charges and used sweet Nina as a knowing stooge to push the info out from the Senate Judiciary Committee and into the minds of Volvo driving suburban mom's, school teachers and politically aware bureaucrats everywhere.

"And so I just started kicking tires, and it was just one of those moments where stuff started—I managed to get stuff. And pretty soon I had Anita Hill’s name, and I called her up, and I had some cockamamie story initially—I don't remember what about—why I was calling her. She knew why I was calling her, and she said that she wouldn’t talk to me unless I obtained her affidavit to the Judiciary Committee."

Just one of those moments... one of those magical, mysterious moments where a dumpy NPR reporter gets handed "stuff" and names to contact and, Oh I don't remember everything but..., Anita Hill knew why I was calling her - she was ready with terms and conditions. Crazy, right? What a fake, phony, fraud Nina Totenberg is with her "legal affairs correspondent for NPR" bullshit when all she really ever has been is a Democrat operative living off a taxpayer funded paycheck  so she can blabber the platitudes of the Administrative State out over the aether.

Ms. Totenberg was in her happy place yesterday, as was everyone over at NPR, because KBJ had secured enough votes from a bipartisan majority of Senators to put her on the Supreme Court. Quoting poet Maya Angelou, Jackson said, "I am the dream and the hope of the slave." This woman was born in Washington DC in 1970, both her parents were professionals with important jobs in South Florida education, she's married to a 5th generation Harvard man - what manner of slave is she?

You can listen to these hens cluck if you've got 12 minutes to spare but I'm going to grab my knife and cut to the bone:
KURTZLEBEN: So what sense do we have of how Jackson sees that distinction between philosophy and political ideology? Where does she fall on that spectrum?
TOTENBERG: Well, we don't know yet (laughter). That's one of fun parts about covering the Supreme Court. But I think you could say realistically that any time one member of the court leaves, that's one-ninth of the court that's gone and replaced by somebody entirely different. So you can't predict how this is all going to shake out.
Is that so? Well, let me give you a prediction based on empirical evidence and a sixth sense of Justice Supreme on Hamburger Hill - I predict that Ketanji Brown Jackson will sit in her straight backed chair and rule just like any White or Latina brainwashed shitlib retard who gets installed on SCOTUS. Clarence Thomas has been sitting in that chair since 1991 and I don't think that Robert Bork or Douglas Ginsburg would have ruled any differently on any important issue. These people get told how to vote by their political patrons and they follow orders. The SCOTUS is the most corrupt and compromised and controlled branch of government because it operates with no accountability and its membership develops a loathing for the Constitution it is charged to defend and protect. Familiarity breeds contempt and these "judges" haven't issued a Marbury v. Madison level groundbreaking ruling in over 50 years (not that they haven't had their opportunities). Now the Uniparty has put a black robe on a black woman who calls herself "a slave" and proclaims that this is the pride and joy of our nation. I'm glad they like her because, after Clarence Thomas steps down from the court, KBJ will then be the lone voice of Black judicial wisdom for the next 30 years. 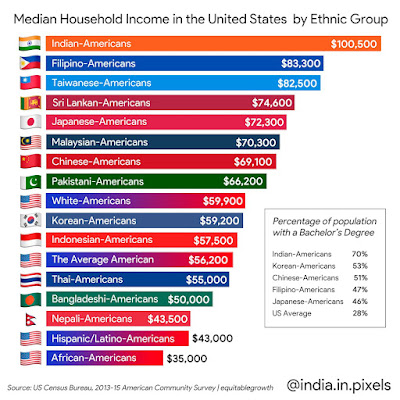 I've got an idea - We the People must expand the size of the SCOTUS to 17 Justices and chose a representative from the ethnic groups listed in the accompanying chart to reflect the amazing diversity of America from Top to Bottom so to speak. Don't we need some high achiever ethnic groups on the highest court in the country Indian-Americans or Chinese-Americans could bring a new and unusual perspective to our legal system. How might Pakistani-Americans interpret our "living Constitution" and its application to geopolitics in Central Asia? Think of the sob-story of hope and perseverance a Japanese-American could tell when she speaks at a Rose Garden victory celebration. I call on Congress to give us real diversity of ethnicity and ideas for the New American Century.