A visit to Colombia, South Carolina is always tough because this town is rough and driving through it makes you contemplate many things you’d probably rather sweep under some mental rug in your brain. Just forget about it. Find a diversion - listen to a podcast, read a book, call someone on the phone (anyone) just get me out of this city. Nope. You’re spending the night. So let’s walk up to Capitol Hill and look around shall we?

First things first, the trees are magnificent, old and beautiful. Live oaks and palmettos cover the hill and they create a magical backdrop for the Statehouse and surrounding statuary. The Statehouse is a grand replacement of the original the was burned to the ground by General Sherman during his long march through the South. The South Carolinians erected a grave stone commemorating the old building and acknowledging the death of their American republic in 1865. 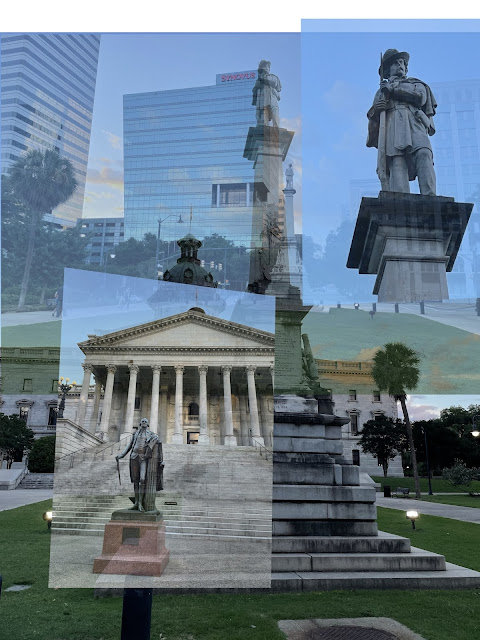 A changed republic rose from the ashes of the old and the defeated southern states created a Dixie backwater version of democracy which is what’s commemorated on the hill today. The State House building and statuary is symbolic of the 3rd world appendage that got dragged along by the industrial powerhouse that was made by Yankees in the aftermath of the war. Geo. Washington at bottom of the stairs with a broken sword and a towering statue of a rebel soldier high overhead looking down on a city that, let's face it, still hasn't recovered from the ass-whooping the blue-bellies delivered in '65. 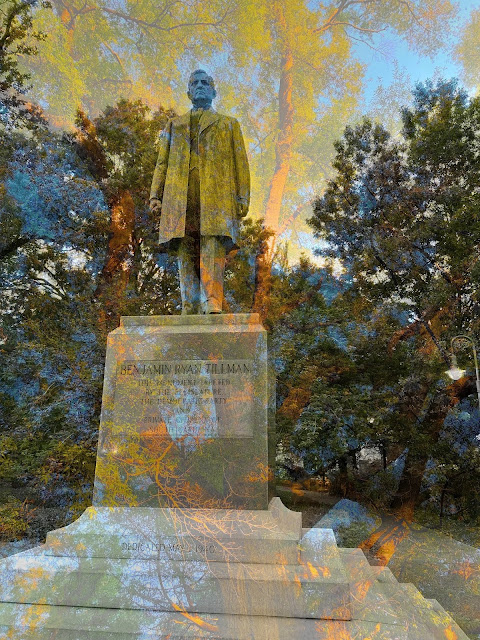 Example A: Right next to the Confederate monument the Democratic Party erected a statue of the Hon. Benjamin R. Tillman who was a native son, Governor and Senator from the great state of South Carolina. Tillman was born into Reconstruction and lived his life under Republican tyranny which he fought until his dying day of July 3, 1918. The statue was erected in 1940 to commemorate a larger than life politician who, like all Democrats, made his living through racial strife, fear and pseudo-scientific bullshit. Check out his 1903 speech entitled "The Race Problem" which covers a lot of ground* in 32 pages and could be used as a Critical Race Theory text book advocating the white supremacists argument. The statue was commissioned in FDR's New Deal America pre-WW2 but it looks like a product of the USSR - brutalist, authoritarian and ugly - which is problematic (to me) because, love him or hate him, any fair reading of Tillman's recorded speeches would have to acknowledge a wry humor and jovial spirit in his oratory. 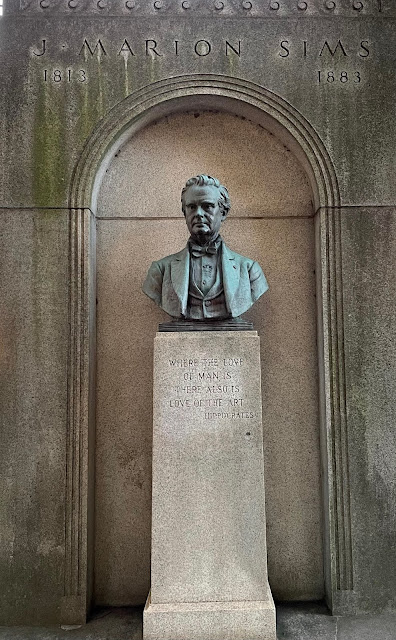 Example B: On my way down the hill I came upon a bust of "the father of gynecology" J. Marion Sims atop a marble pedestal inscribed with the sentimental musings of Hippocrates of Kos - "Where the love of man is there also is the love of art." To which I retorted in a thought balloon emerging from my head, "Really? What a bunch of pompus weirdos these doctors are and, judging by the age of this quote, always have been." Dr. Sims was a 19th Century version of Dr. Anthony Fauci who advanced medicine by operating (yes, with a scalpel and other implements he invented) without anesthesia on the female parts of slaves who had no say in the matter. Born in Lancaster County, he was always loyal to The South and worked hard to influence European powers to recognize and support the Confederacy during the War Between The States. Putting the question of patriotic loyalty aside the contribution Sims made to woman's health and surgical innovation can't be denied but the stories that came out of those hospital rooms are straight up gothic horror movie.
My visit to Colombia, SC and the State House showed me that the United States of America is still a very young nation with many more trials and struggles to overcome awaiting it in the future. The past never gets completely erased or rewritten even though all the politicians, educators and FakeNews media do everything in their power to achieve that unworthy goal. politicians will always use race as a tool to achieve their nefarious ends and foment strife because "race" is inked into each persons DNA so they have to live with it. Modern medicine is torture and doctors view patients as experiments with the understanding that advancement in their profession is hatched from an Orphic Egg filled with suffering and blood.
*Dr. Aruna Khilanani who hates white people should read some of Tillman's observations about the caste system in India to ameliorate her resentment.