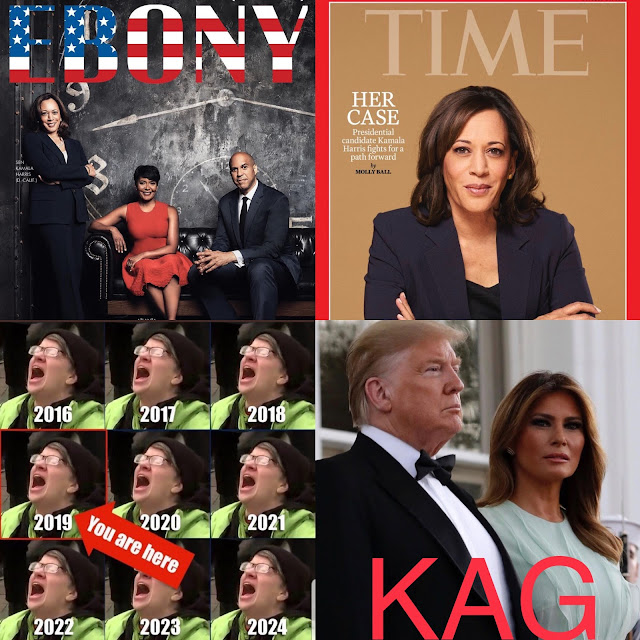 “Long before Barack Obama, there was Doug Wilder. The trail blazed by Wilder, the first African-American elected Governor of any state, helped to make President Obama possible. Now for the first time, this grandson of slaves tells his remarkable story in his own inimitable fashion. Son of Virginia is an instant classic that will inform and inspire for generations to come.”--Prof. Larry J. Sabato, Director, University of Virginia Center for Politics

30 years ago a high yellow dude from Richmond got himself elected Gov. of the Commonwealth of Virginia. He was a first (and so far, the last) negro to attain this high office which caused a big stir in a State that 25 years earlier had been fighting the desegregation and racial integration imposed on it by the Civil Rights Act of 1964. It all worked out - the Gov. was shagging the wife of a media mogul campaign donor which is what outlawing discrimination based on race, color, religion, sex, or national origin was all about - Wilder did his 4 years* on Shockoe Hill and, once he left the Executive Mansion, he stumbled about the Commonwealth looking for his next gig.  A decade later he landed the job of Richmond's Mayor for 4 years and then he created the United States National Slavery Museum. Does this trajectory look familiar?

30 years ago Virginia elected a black(ish) Governor and it hasn't come close to electing another POC to lead the State since that time. In fact, the current VA Gov. is famous for having a yearbook photo where he is either 1. wearing Blackface or 2. wearing a Klan hood. That Douglas Wilder was a real "trailblazer" who "helped to make President Obama possible" (thanks a lot!) and then un-endorse America's FBPOTUS in 2012 in a slow descent back to slavery. He was Virginia's first, and last, black Governor.

Time magazine has published it's Man of the Year issue since before I was born (1927) and in my youth, before the editors changed it to Person of the Year, this recognition carried considerable weight in the socio-political kultursmog of America. In the Internet age, as print publications die out, the news weeklies don't matter much anymore but they still sadly pronounce their verdict every December and you can bet that this year's winner will be just a little more pathetic than last years because in the "Age of Trump" Globalist Socialist Ecologist Atheist Humanist Persons are burning... they're burning. 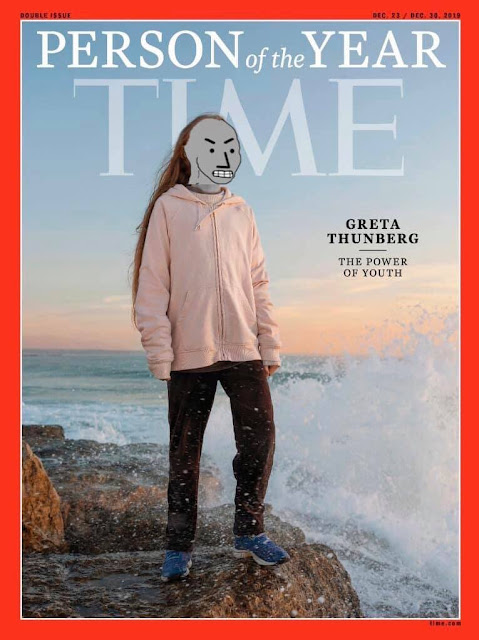 If Time Magazine thinks some random NPC with a PR agent and some unknown financial backer is a "person" then Clear Pill the editors and reboot their mind. Why not choose the Yellow Vest protesters in France or the Honk Gong protesters in Jina? How about Modi from India or Bolsonaro from Brazil or "two faced" Justin Castro from Canada? I could probably think of 100 persons more important than Greta - how about "lunch-bucket" Joe Biden? 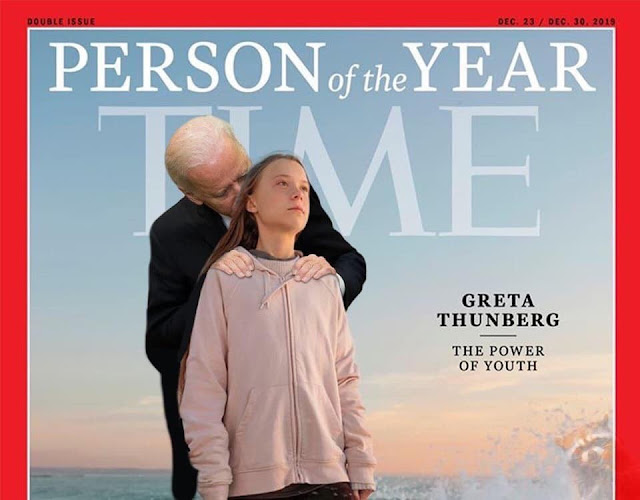 Maybe the decision makers at Time think the current Democrat front runner and former Vice President of the United States of America is a creepy, hair sniffing, corrupt old man who confronts Corn Pop and likes to have children sit on his lap. To be honest, there were a lot of bullshit scandals in 2019 to choose from so it must have been a fiery staff meeting on the day of judgement. 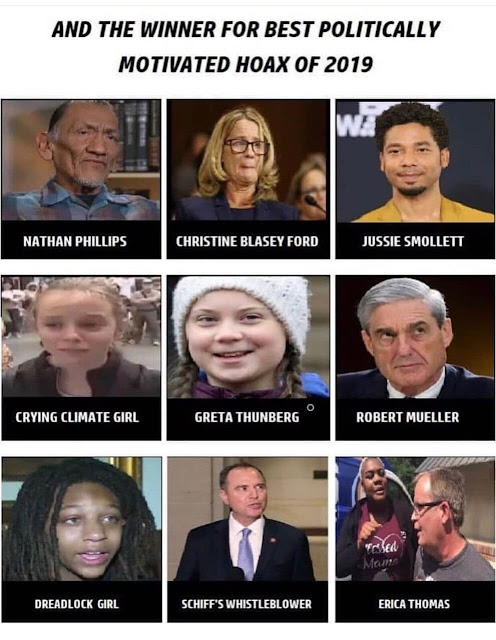 It's the world we live in... the world we created and navigate as best we can. The #FakeNews is no help - in fact, #FakeNews is the Enemy of the American People - and our Representative Government is NOT "representing" anyone but pissed-off financial backers who fear getting punished by The Elvis from Queens. 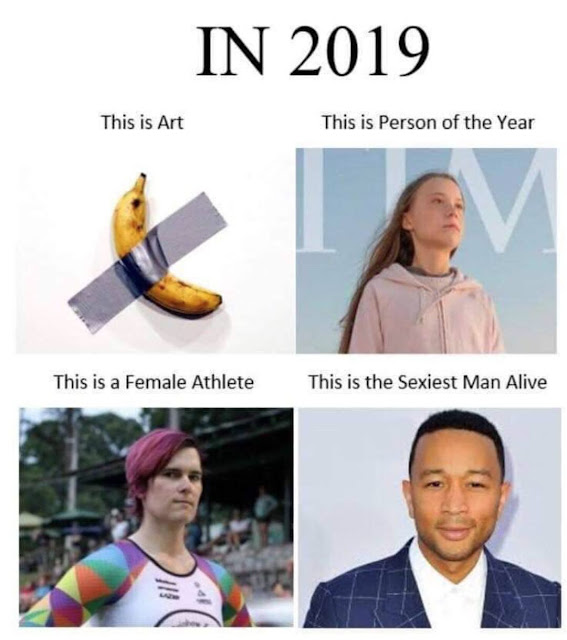 “Oh, I worry,” she says, “I worry.” Sitting at a table upstairs from the stage where she’s just held a town hall in Waterloo, Iowa, Harris begins to laugh, that deep, body-shaking laugh of hers. “Let me just tell you, I was born worrying. I had a mother who worried, I had a grandmother who worried. It’s kind of in my blood.”

The Man of the Year in 2019 was Donald J. Trump - just like he was in 2018, 2017 and 2016 (and 2015) - but the "Person" of the Year was our ebony Lotus Flower. The Nordic teen scold had her day in the sun but it was the incredible (and unexpected) failure of Kamala Harris's presidential campaign that eclipsed all other stories and set in motion the national suicide of impeachment. She was supposed to be Obama in a dress - a junior Senator from a Big Blue State with a thin legislative record who could serve as a somewhat muddy tabla rasa for the political consultants to write America's story "for the people" upon - and allow the Democrats to catch lightning in a bottle a second time. She officially launched her POTUS campaign on MLK's Birthday (1/15) in Oakland and by July 4th she was riding high in the polls in a solid 2nd place with 15% of the vote in a very crowded field. She had pulled ahead of Bernie and Warren and was just 10 points behind Biden who she publicly shamed at the first Donkey Debate (late June) for his views on school bussing policy of the 1970's. The California oligarchs who owned her must have been high-fiving each other at their local Starbucks because the road to the White House was looking like a straight ribbon of black with just one old septuagenarian white guy staggering right down the middle of the road easy to run over. But then Tulsi grabbed a knife and cut this beautiful Lotus Flower down during the second Dem debate (late July) and the impeachment of President Trump started.

By late August Kamala's polling was down to an RCP average of 6.5 (-10 from Independence Day highs) and  that is when Human Scum Michael Atkinson pushed this preposterous "whistleblower" complaint up to the DNI and started this theater of the absurd. By September 24th Kamala was down to 5.0 in the polls and the magnitude of her failure started to sink into the thick skulls of her California donors - the same donors who finance Nancy Pelosi and Adam Schiff - and Pelosi opened an "impeachment inquiry" because “No one is above the law.” Impeachment was going to happen from that day forward - it has to happen and, if you're a Leftist, the ends of expelling Trump justify whatever means need to be taken because they can't beat him any other way.

The Democrats can't recreate the Obama Coalition because, just like Douglas Wilder, our FBPOTUS was a one time experiment in self government that will NOT happen again for at least 30 years (if ever). Kamala never had a real chance and neither does Corey Booker or any other Ebony candidate because the American voter ain't gonna make that mistake again. That's the REAL reason DJT is getting impeached but it's a reason the Democrats can't cite in their Articles of Impeachment.

The good news (I guess) is that "For the First Time, All of America’s Top Pageant Winners Are Black" so...


*Note: Douglas Wilder did run for POTUS 2 years into his Gubernatorial term which should surprise no one.