October 22, 2019
In early October, just before bow season starts, the whitetail deer are plentiful and playful in my part of the world. They're everywhere and since no one is trying to kill them (yet) they are quite bold and nonchalant in their meandering around the land, devouring crops and damaging property. This is the time of year when several unfortunate people will die as a result of a careless deer leaping into the road and smashing through the windshield at 50 MPH or (worse) forcing a car off the road and into a tree in an effort to avoid hurting the skittish animal. Noble and silent they hide out in the woods during the day, but at night they step out into the open fields and gather in herds 10-20 strong to roam the land. Go outside for a sunrise walk and you'll see them grazing on yonder hillside or strolling along the lake shore sniffing the air. They run, they jump and, from time to time, they get their hoof tangled in a wire fence where they dangle, prone and vulnerable, waiting for what comes next. Sometimes a human (me) will come along and cut the wire fence snaring the animal so that they might limp off to the forest and heal but other times the coyotes devour the deer leaving nothing but a dangling leg in the fenceline.  It's the harsh reality of life - real (living & dying) life - that happens day after day for the people of this country who don't live in the antiseptic odorless meta-world of a music video and have to clean up God's mess instead.


Even the best efforts to set things right often fail and leave us harder choices requiring decisive, sometimes violent, action. For instance, the deer I liberated from the barbed wire did scurry off to a covert of thick brambles and leafy trees but, alas, her leg did not heal and the following day my hounds discovered the wounded beast hobbled in a nearby creek. When the dogs nipped at the vulnerable invalid she began to bleat and I heard what sounded for all the world like a screaming child in the nearby woods. The voice of a young deer is very human in tone and modulation even though you can't understand a word of it the "message" is loud and clear - HELP!!! A silent and stealthy forager can make a lot of noise when they're in distress. It honestly sounds a lot like the laugh of The Joker as portrayed by Joaquin Phoenix in the newly released Todd Phillips film recounting the origin of Batman's primary nemesis. 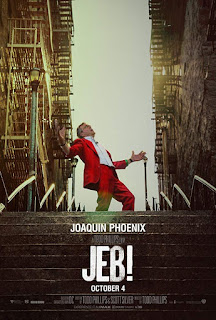 This movie made a big splash and a river of pixels has been spilt discussing Incels, White Supremacy,  Antifa, Trump and many other contemporary social issues which get shoehorned into The Joker's clown shoes but the most important aspect of the film (for me) is the fact that it's set in 1981 Gotham City. This movie is not about today. This movie is about a broken world that existed 40 years ago!!! It is the story of a man who self actualized by coming to understand that in Clown World life is a tragedy until you make it a comedy. Oh, the allusions to famous De Niro movies from the '70's are heavy and a hat tip to KOTCB favorite "Network" is there for those with eyes to see, but the point of the nostalgia is how long ago Travis Bickle and Howard Beale did their thing. The "real rain" that will wash the city streets clean isn't gonna happen now - it already happened in 1976 and look at our city streets today. This isn't a "I'm mad as hell and I'm not going to take it anymore" moment - that happened almost 50 years ago and the "mad prophet of the airwaves" was assassinated by domestic terrorists in front of a "live" studio audience to boost TV ratings. Everyone's talking about today like we're reliving some era that ended 2 generations ago. There's not going to be a cleansing rain and we have been "taking it" for 45 years. Once Reagan was elected the unlovable loser of the 1970's turned his frown upside down and discovered his true identity as a nihilistic pierrot hell bent on the dissolution of society with no identifiable political of cultural goal.

"I've been a puppet, a pauper, a pirate, a poet, a pawn and a king
I've been up and down and over and out and I know one thing
Each time I find myself layin' flat on my face
I just pick myself up and get back in the race
That's life (that's life), that's life and I can't deny it
Many times I thought of cuttin' out but my heart won't buy it
But if there's nothin' shakin' come this here July
I'm gonna roll myself up in a big ball a-and die"

Aside from the puppeteer connection to Frank Sinatra's 1950's movie "The Joker's Wild" when Mr. Phoenix dances to "That's Life" (one of the greatest American standards) there is an unambiguous reference to cinematic history in showing clips from Charlie Chaplin's 1936 classic "Modern Times" which throws into sharp contrast the difference between The Little Tramp and the Joker. Chaplin explored the impacts of industrialization on the human spirit and how a man might find a way to live an authentic life side-by-side with the machine. Our contemporary film auteurs make the point that an "information age" or post-industrial society obliterates humanity all together and leaves a man broken and insane with the machine ascendant. Might as well paint your face and transition into the harlequin of some fevered imagination because Mom lied to you, Dad rejected you, your girlfriend is a daydream and the "social safety net" is a poorly run insane asylum. It's depressing, but it's worth thinking about and formulating some plan of action to survive The Joker apocalypse because Clown World is upon us.


Back here on planet earth the deer is still screaming bloody murder as it crawls across the creek bed looking for an escape route that doesn't exists. What to do? Go home and block out the worboling yelps as the deer dies from fatigue and varmint bites or grab my gun and clean things up? I walked back to my house and grabbed a 12 gauge pump and shells and hurried back to wounded animal where I planted my feet and loaded up. Shooting something for real is a lot different than watching it happen on the silver screen and no makeup artist or sound engineer, not matter how talented, can convey the true (real) experience. Saying a little prayer I took aim and sank two slugs into the doe's heaving chest and, after waiting a minute for her to die, grabbed the hind legs and dragged the lifeless body out of the water. On the farm we've got a junk pile up on a hill behind a line of trees so I tossed the carcass there were it will be devoured by buzzards and other carrion looking for food. There is an authentic reality that artists try to illuminate through detailed or imaginative representation of our experience and environment. There is also a Clown World which obscures and rejects the real in favor of make believe illusion and dishonest fantasy. Keeping it real - Ring Loud, Ring Often. 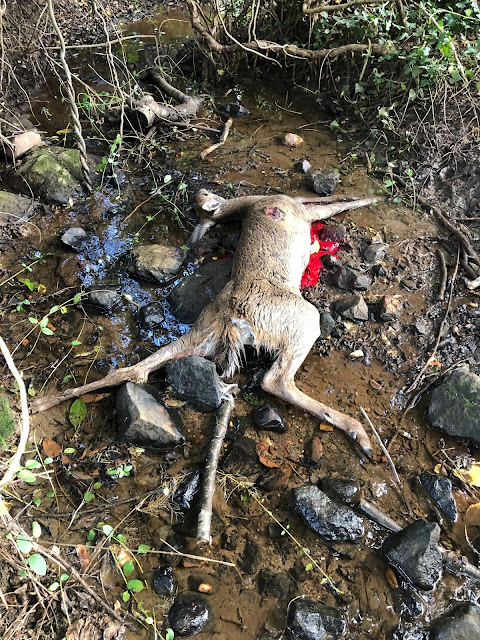