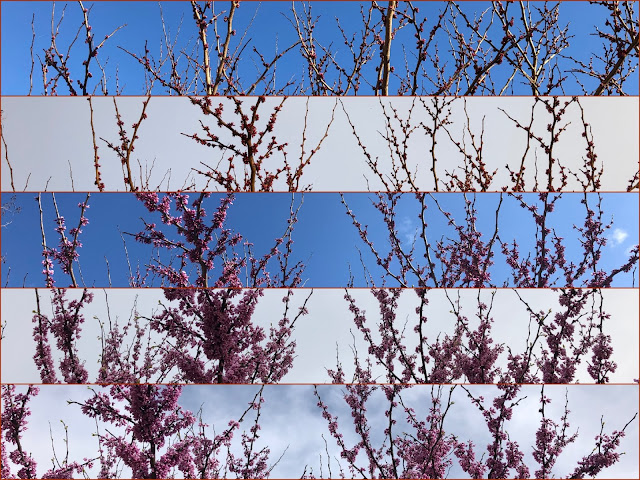 There is a force in nature that can not be underestimated or ignored and that force is consistency. In my part of the world, what I like to call John Bell country (otherwise known as The Heart of America),  that consistency comes every vernal equinox when the cercis canadensis prepares to bloom and over the next 6 weeks erupts into a fiery ball of life. Our State tree is the Dogwood and it is beautiful to see the flowers bloom in early spring against a backdrop of still dormant woodland with the yellow swaths of Forsythia and dabs of Daffodil. But when the Redbud starts popping and flowering along the branch it is magic to the eyes and it happens so slowly and with such consistency that you can actually watch the petals unfold. It happens every year the same as it has happened for millennia before humans walked this land and, God willing, it will continue long past my time but I sure do enjoy it while I'm here - in fact, I'd have to say, just by itself my annual spectating of the blooming Redbud makes life worth living. There's something divine, eternal and terrifyingly powerful in the unambiguous certainty that it's gonna happen again just like it happened last year and like it happened a hundred and a thousand and ten thousand years ago. That's nature. That's the natural order of things and it follows a "natural law" that simply can't be evaded or obfuscated or obstructed.

The season of the Redbud wraps up around Derby Day - the first Saturday in May - which is when the powers that be run the first race of America's Triple Crown at Churchill Downs in Louisville, Kentucky. This year I was there with my beautiful wife and members of her extended family rubbing elbows with the swells and other colorful souls who love horses, competition and risk - in other words, Real Americans. There was not an obvious Bernie Sanders supporter in attendance (even though there were a lot of weird-assed people in clownish costume milling about) and as Uncle Bob (correctly) pointed out on our way into the track, as we passed barkers and grifters and RVs filled with 11AM drunkards and hustlers selling tee shirts and burgers charbroiled on makeshift grills, "the goddamn Socialists would do away with all this free enterprise." Indeed they would, but in the words of Syrio Forel and Arya Stark: "Not today."

Not today mutherfuckers because Western Civ. is still hanging tough despite what appears to be societal chaos and civic disintegration as presented by the #FakeNews media. These people bitching and griping about Justice (Social or otherwise), income inequality, racism, sexism, homophobia or anything else should pull their head out of their ass and Run for the Roses. You'll see it all playing out right in front of you - $15 Mint Juleps, racial harmony, women (REAL women) flaunting it big time, super gay dudes (even the straight ones) as far as the eye can see and injustice on a Bataan Death March scale including the main event which ended in a costly disqualification. One member of our group lost $15K when the winning horse, ironically named "Maximum Security", got disqualified for cheating and allowing a 65-1 longshot named "Country House" and owner Maury Shields to WIN!!! Did someone say White Privilege? Because that's just another way of saying country house and that will Trump maximum security (which doesn't exist) if the horses owners are responsible for all those annoying robocalls you keep getting on your cell phone (and they are). My money was on Code of Honor which placed showed but couldn't win because there's no honor among thieves.

There is the law of nature and nature's God which are perfect and immutable and then there are the laws of man which are imperfect and in flux. We humans are stuck in the middle and so we muddle through as best we can. Holding fast to what is eternal while navigating the capricious whims of man made justice.