Am I to understand that:
Gov. Ralph Northam was NOT in the Black Face/Klansman photo in his college yearbook page.
Jesse Smollett did NOT fake a hate crime against himself in Chicago.
Charlize Theron's adopted (black) son is NOT a boy because at age 3 (s)he decided to be a girl.

Just random observations floating in our political/cultural aether and it's best to NOT look too closely because, well, it's just hard to measure and confront the truth of the assertion. Don't ask a bunch of obnoxious questions or push too hard because there's no stomach for getting to the truth. Let sleeping dogs lie.

How about this dog?
The Intelligence Community was NOT spying on Donald Trump's campaign and presidential transition team.

It was not immediately clear what Mr. Barr was referring to, and he did not present evidence to back up his statement. The F.B.I. obtained a secret surveillance warrant on a former Trump campaign adviser, Carter Page, after he left the campaign, and reports have suggested it used at least one confidential informer to collect information on campaign associates.

But that's NOT spying! Right? That's not spying, no, that's just something called "secret surveillance" of Carter Page and anyone he talked to AND OF ANYONE WHO TALKED TO ANYONE HE TALKED TO. That surveillance includes phone calls, travel, credit card purchases, email or text message communications - pretty much everything but Carter Page and friends and friends of friends private thoughts or handwritten secret notes. Oh yeah, and AT LEAST ONE (meaning more than one) "confidential informer" was placed in the Trump campaign to inform confidentially (i.e. spy).

Would it be too much to expect the NYTimes to tell its readers which classification of CI the DOJ/FBI planted in Trump Tower? I for one, would really like to know what type of CI(s) were mucking around the MAGA movement and who, exactly, they were informing in the Justice Dept. It's called journalism and somebody on 42nd Street must remember what it was like to break a story and uncover some truth instead of doing this Mockingbird act for the US Intelligence Community. It's pathetic. 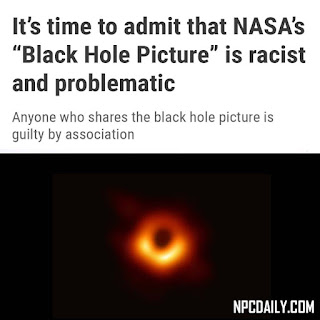 Space.com informs us that "Black holes have finally been dragged out of the shadows." By which they mean that a Black Hole has finally been photographed, well - not exactly, but the event horizon surrounding a Black Hole has been photographed, well - not exactly, a project called the Event Horizon Telescope consisting of many recording stations located around the earth has captured data and those zeros and ones have been constructed into an image that looks a lot like what we think the event horizon around a Black Hole "lurking at the heart of the elliptical galaxy M87" would look like. Thankfully this massive gravitational vacuum cleaner is 50+ million light years from Earth so we the living will never really experience what it's like to get sucked into one of these monsters (or will we?). I'm starting to think we are about to experience a virtual Black Hole because this Mueller Report has dropped and, as was pointed out in KOTCB The Trojan Equus Africanus Asinus Piñata, the supernova imploded Hamburger Hill and while the White House sits outside this Event Horizon the J. Edgar Hoover Building does not.

"The event horizon is the ultimate prison wall," BHI founding director Avi Loeb, the chair of Harvard's astronomy department, told Space.com. (Loeb is not part of the EHT team.) "Once you're in, you can never get out."

The Event Horizon is the Wall to top all Walls. You can't climb over it. You can't dig under it. In the immortal (i.e. eternal) words of Freddie King, You, me and everyone else on the planet is "Going Down"* and that means time and space are going to get strange.


"Yes, I got my feet in the window
I got my head on the ground"

It's called spaghettification and it's what happens when something gets trapped in the Event Horizon and then gets pulled into a Black Hole. What you know, or what you thought you knew, starts to look very different as gravity stretches it while time seems to stop to outside observers but life goes on as normal for those on the inside. It's going to be an odd and ugly spectacle to see this all play out but there is no escape - the appointment of  the Special Councel and Trump's refusal to fire Mueller ensured that this Black Hole would happen and now we're all going to go through it and, FYI, nothing survives that journey.