the right sort of nonconformist 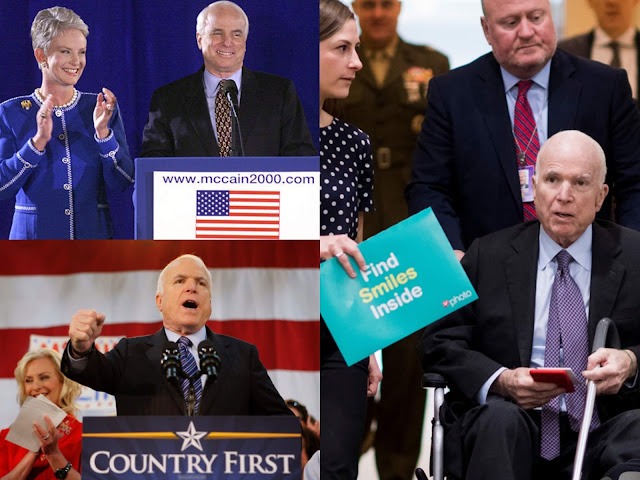 In days gone by the KOTCB blog has outlined 3 fundamental reforms that would, if implemented, improve the US Federal Government (see KOTCB John Boehner, I give you a standing 0) and in their short form they are as follows:


If these simple rules were in place then John McCain would have been forced into political retirement (at the Federal level) in 2002, just a few years after loosing his bid to be the GOP nominee in the Y2K presidential race, and preventing the nation from having to endure the last sixteen years (16!!!) of his grumpy "nonconformist" bullshit. I write this as one who supported "the Maverick" in his GOP primary battles with W. and as a person who has long standing personal and familial ties with the Senator from Arizona. The year 2000 Republican primary took something out of McCain - especially the firewall battle in The Palmetto State where Bush family skullduggery reached a new low that haunted McCain for years (probably still does). But no matter how much McCain supporters would like to place all the blame on Carl Rove and the Christian Right for what happened in the South Carolina primary it was, at the end of the day, the "war hero" with a hot temper and unconventional style that sealed his own fate.


Evidently unnerved, the McCain campaign stumbled. Addressing the issue of the use of the Confederate battle flag — a subject of passionate debate in South Carolina — Mr. McCain vacillated. He called the flag “offensive” and a “symbol of racism and slavery,” but later backed off those remarks, referring to it as “a symbol of heritage,” the same language flag supporters used in explaining why it flew over the statehouse.
“I feared that if I answered honestly, I could not win the South Carolina primary,” Mr. McCain later conceded. “So I chose to compromise my principles.”*

This "concession", as the NYTimes calls it, is emblematic of what doomed McCain's presidential runs in 2000 and 2008 and what citizens of every stripe and all political persuasions hate about him.


“So I chose to compromise my principles.”

Probably not for the first time and certainly not for the last unless one calls into question what those principles, in fact, are and for that their is a big, ambiguous, never to be questioned answer.

"Country First" was the campaign slogan dreamed up by McCain's consultants for the 2008 presidential contest against Barack Obama ("Yes We Can") and it's bland demand to subservient allegiance stands is stark contrast to Trump's admonition that it's time to "Make America Great Again." Country First is the way to say "America First" when you don't want to say America First because that would cast you as a Nazi sympathizer which is, of course, what all Republicans actually are in the eyes of the NYTimes, Politico and any of the JournoList 400, like Michael Hirsh, who cover politics for the #FakeNews scum. So when Hirsh pens an article for Politico titled John McCain’s Last Fight you kinda know how it's going to turn out before you even read paragraph #1 which is as follows:


John McCain always said he’d go down fighting and so he has, dickering from his deathbed over CIA nominee Gina Haspel and pre-emptively uninviting President Donald Trump from his funeral, then leaving as a legacy some fierce final words for the leader of his party, who is now a political enemy. All Trump displays is “a reality-show facsimile of toughness,” writes the six-term Arizona senator and former GOP presidential candidate who for a generation of Washington politicians has defined genuine toughness, in his forthcoming memoir.

Yeh, he's gonna "go down fighting" because he's goin' down - he's "dickering from his deathbed" - he's "leaving as a legacy some fierce final words" in "his forthcoming memoir" because John McCain is going to die... any day now. So when I hear that a "White House official mocked 'dying' McCain at internal meeting" I'm not surprised and I'm certainly not offended because it's true. It doesn't matter what the Maverick thinks of Gina Haspel or anything else because he's on the way out and no power on this earth (not even John Rich) can raise him to "fight" some more.


Makes you wonder how John McCain won 60 Million votes in 2008 doesn't it? Yes, they were Raisin' McCain in 2008 because he'd been dead (politically) since his "compromised" campaign in 2000 and, low and behold, he walked right into the greatest opportunity to truly "reform" the Federal Government and it's relationship to it's patriotic citizens since 1929. The 2008 financial crisis saw the gears of the global new world order freeze up and the issue was forced - should we bail these motherfuckers out by smashing the piggy bank of our children, grand-children and great-grand- children or not? McCain proved himself the same principled Republican on this issue that he was on the Confederate Flag in 2000 - "McCain on U.S. economy: from 'strong' to 'total crisis' in 36 hours."


Early this week, as the American financial system absorbed one of its biggest shocks in generations, Senator John McCain said, as he had many times before, that he believed the fundamentals of the economy were "strong."
Hours later he backpedaled, explaining that he had meant that American workers, whom he described as the backbone of the economy, were productive and resilient.
By Tuesday he was calling the economic situation "a total crisis" and denouncing "greed" on Wall Street and in Washington. Meantime, he moved from adamant opposition to resigned acceptance of the big government bailouts.

If you're wondering what's going to adorn John McCain's head stone the words "from adamant opposition to resigned acceptance of the big government" would be a fitting statement to sum up the man's political life - his personal life was tortured (literally), tragic and plush. So if you're wondering what the "Country" in the slogan "Country First" represents then I've got no idea what to say - It doesn't mean derivatives traders, AIG, Big Banks, the Federal Housing Finance Agency's and corrupt congressmen to me but I have to believe that's exactly what it means (with resigned acceptance) to John McCain. Here's the great reformer making promises right after the market meltdown:


"I promise you that We will never put America in this position again. We will clean up Wall Street. We will reform government." What "We" is he talking about here? I fear it is the Royal We otherwise known as "Country" and that We ain't gonna change a thing - Yes We Can. A bunch of Senators voted NO to the bailout and Mike Pence stood tall with another 170 in the House so a brave nonconformist could have lead the charge and hammered home the blistering injustice of our national spanking but, alas, there was no champion to organize and inspire the peasantry. The guy who should have fought for America decided to swear his oath to Country instead and his chance to become Leader of the Free World was traded for a $700 Billion bad check.

So after losing in 2000 for the sin of "compromising his principles" and then losing again in 2008 because of his "resigned acceptance of the big government" the Maverick, at the age of 72, decided it was time to retire and do community service at his Arizona home, right? Wrong!!! He kept on running (and winning) and stayed right were he'd been since childhood - Washington DC. With brain cancer this dude isn't going anywhere but Country First. He'll get some of his brain cut out one week and fly to DC and vote on legislation a few days later. NOT LEAVING people - got it?

This is many things but one thing it is not is patriotic - This is nonconformity of the highest level because the framers of our Constitution would never believe that an octogenarian with brain cancer would have the audacity of rolling into the Senate chamber in his wheelchair and vote on the issues of the day. This is noncompliance with standards, rules, or laws of what Country on this earth? Our Country.