March 10, 2018
When it comes to beef jerky I'm not too picky - it's just dried up meat - London broil or some lean cut paper thin and spiced up before slow roasted in some contraption that evaporates all the water in the beef without burning it. At a high level it all pretty much tastes the same when it comes to the packaged stuff - but I have to say, when it comes to advertising, Jack Link's really does capture the spirit of this food product:


The world can be divided into two kinds of people. Those who run with Sasquatch and those who run from Sasquatch.


I choose to stay at the top of the food chain so I'll be runnin' WITH Sasquatch as fast as I can - not because I want to but because I've learned that runnin' FROM Sasquatch is a horrible experience and ultimately a futile exercise in self-delusion. No one runs from Sasquatch and lives to brag about it because the hairy beast will always catch up to you and then... then the runnin' stops and the pain starts.

Case in point: The Man Who Knew Too Little (Living a liberal fantasy is complicated).


Donald Trump’s victory shook him. Badly. And so Mr. Hagerman developed his own eccentric experiment, one that was part silent protest, part coping mechanism, part extreme self-care plan.
He swore that he would avoid learning about anything that happened to America after Nov. 8, 2016.

Erik Hagerman, the former senior director of global digital commerce for Nike, has retreated to his pig farm in Ohio and created a personal "Blockade" to prevent all things Sasquatch from entering his dominion. Russia. Robert Mueller. Charlottesville. Pussy hats. This guy is a regular Sargent Schultz when it comes to MAGA and "extreme as it is, it’s a path that likely holds some appeal for liberals these days — a D.I.Y. version of moving to Canada*." The fact that the NYTimes considers this sad, escapist story to be "News That's Fit to Print" says everything you need to know about the "liberal" mind and the absolute ass-kicking Sasquatch is unloading on it right now. Insane - there's no other word for it. 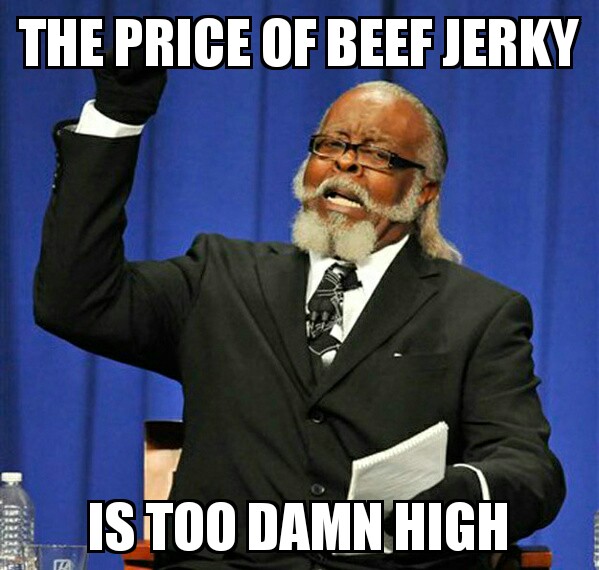 Crack Jerky
Let me answer with the story of Rob - my beef jerky dealer who makes some of the best I've ever had and supplies hunters and contractors living in Central Virginia with a product he calls Crack Jerky (because once you start eating it you can't stop). $30 per pound and worth every penny it is prepared using a tightly held marinade and slow cooked in a dehydrator lodged in the corner of Rob's kitchen. Rob is a giant of a man, full beard and long flowing locks he drives a weathered pickup and proudly flies the Confederate flag from the cab (not because he hates anyone but because he loves the South). Rob is Sasquatch - he even looks like Sasquatch - and he grew up on a pig farm and butchered hundreds of pigs every year during his childhood and adolescence up until the time some vandal burned his fathers barn to the ground and put the family out of business. One of the nicest guys you'd ever want to meet, Rob is not happy about what went on in Charlottesville last summer (protests Mr. Hagerman is completely oblivious about) but he has a clear perception of who is responsible for the discord and violence unleashed on his town. He's not a rich man but he never fell for the Hope & Change presidency and felt the pain of the Obama years (week economy, lost health insurance, dismissal of his heritage) in a way that Erik Hagerman never could imagine but Rob didn't withdraw into his private domain - He just kept on runnin' and I'm going to keep on runnin' with him.

*Note to the NYTimes: Even Constitutional Monarchy has a Sasquatch.