March 27, 2018
And the LORD God caused a deep sleep to fall upon Adam, and he slept: and he took one of his ribs, and closed up the flesh instead thereof;
Genesis 2:21

Far be it for me to declare who, from the legion of choices, should be the rightful spokesman for Generation Z but were I a member of that group the last guy I'd choose to voice my desires, hopes and concerns is Parkland student activist David Hogg. No normal person gets to choose these buffoons as they are propped up and promoted by Big Media honchos in NYC and (to a lesser extent) LA and Silicon Valley to serve the various interests media conglomerates deem important - one of those interests is gun control (broadly defined). And the "voices" these suits anoint are often horrible examples of the human species spouting bad ideas and proposing impossible solutions to what ails our society. Reflecting on the conventional candidates for this generational role gives me nausea - Lady Gaga is the voice of Millennials just like Kurt Cobain was the voice of Gen X just like Peter Coyote is the voice of the Viet Nam Generation. Even a guy who might be legitimately awarded the title voice of a generation probably isn't when you honestly appraise that generations total contribution to society and the multitude of views or actions associated with the slimy bunch who comprise it.  Now it falls on the Parkland kids to become the voice of their generation (for their parents sake):


Change won’t come easy, as they learned, but these students are the fierce voice of a generation on gun control. And they’re a ray of hope in an apathetic, gun-happy nation desensitized to violence.
We, the horrified adults, want to grab our kids and run from the gun madness. The students, armed with their fresh grief and outrage, are fighting for what they need from Tallahassee and Washington.

I do count myself among the "horrified adults" but I'm not prepared to run from the gun madness just yet. As KOTCB readers know (or should know) I could hardly be called a gun nut under normal conditions but I am a strong believer in 2nd Amendment rights as I am for most amendments to the constitution except for 16, 17 & 18 so that puts me on the wrong side of history as far as the D. Hogg's of this country are concerned. That is what horrifies me and I simply have no idea how to solve the mental problem these students suffer from because it's much bigger than me or Madison Ave. or The US Constitution or anything that I can think of. When I was a teenager (before smart phones and video gams) I would read comic books and stuck in the middle of my escapist fantasy would come a jarring shot of reality from Charles Atlas that would wipe the cocky smirk right off my face. You might enjoy day-dreaming about Captain America or Thor - God of Thunder but get real because sooner of later you're going to be on the beach and get your skinny "bag of bones" ass kicked unless you take real action and make yourself strong enough to fight back. 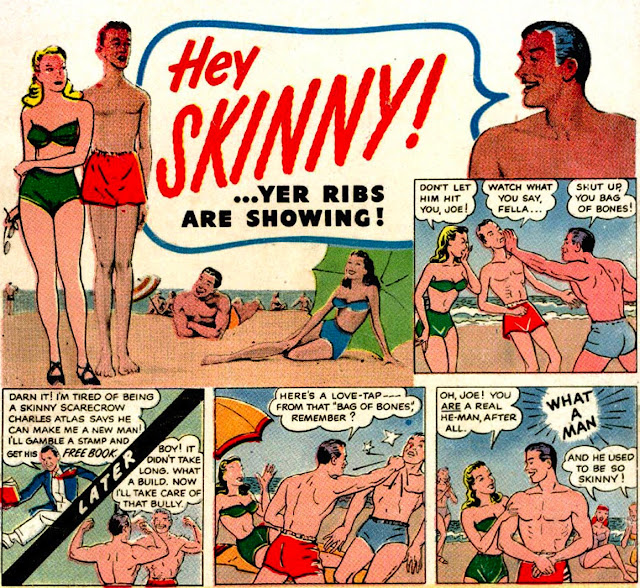 Not everyone will take the time and exert the energy required to become a body builder and for those lazy scarecrows a gun is a pretty good fall back tool for self preservation. So I lifted weights AND I learned to shoot a gun because I have a will to survive in the face of unforeseen and, often times, unwarranted threats*. But that's me - what's the answer for the David Hogg's of this world? Do we even want his type possessing firearms? There is an entire generation of these people born right around the 9/11 terrorist attack and in the subsequent years who have no living memory of a world without constant video surveillance, on-line data profiles, mobile phone geo-tracking and all the rest of the panopticon state we've been forced to live in for the past 17 years. All because of terror and drugs and bad ideas We the People allowed to be imported onto our shores over the past 50 years and here we are... watching hundreds of thousands march for our lives. It's pathetic but we did it to ourselves and only We can fix it.

The solution, I'm afraid, is going to require a cold, hard punch in the face from someone who takes the full measure of David Hogg and his fellow students and finds them lacking the intestinal fortitude and brawn to defend themselves. Someone like Nicolas Cruz but a lot smarter and more powerful - filled with contempt and hatred for their self-righteous preening and pampered existence who will think nothing of flushing their skinny little selves down the toilet bowl of history. It's not David Hogg's fault that he turned out the way that he did - it's our fault and we're all going to pay a horrible price for our decadence and indulgence. One of the saddest little marchers at the rally was a tyke holding a placard declaring his schools probation of peanuts and making the perfectly sound argument (to them) that if something as innocuous and commonplace as a BB&J sandwich can be effectively "banned" then so too can gun ownership be outlawed for health reasons. This is the world these children live in - NO PEANUT BUTTER! And they think it's normal. They think it's perfectly fine for a school to ban peanuts from the facility and nobody questions the capriciousness of this rule or, heaven forbid, violates the edict. David Hogg is in a deep sleep and like a groggy teenager on a cold and rainy Monday morning he wants to stay in bed and skip school - but he will be taught his lessons the hard way and sooner or later he'll find himself banished from the garden of Parkland to fight it out, naked and afraid, in the cruel world of those who have awoken.

*Note: Just for the record, no one is ever going to take away my guns. I'm always going to own a closet full of shotguns, rifles and pistols - forever. If the 2nd Amendment did get repealed I wouldn't voluntarily hand over my guns - law enforcement would have to come and take them. I'm not one of those who would put up a big fight and have some kind of Ruby Ridge shoot out with the Feds - if the cops could find my guns (which they would never be able to do) I'd let them take them. Then, once they were off my land, I would just 3D Print a couple new guns to replace what was taken from me. No biggie, I eat peanut butter too.

Anonymous said…
Very true. It seems each generation is getting dumber and easier for the elite to control.
3:37 AM