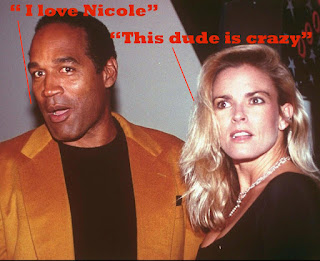 The Juice never made it to Mexico but boy could he run. 2,000 yard in 14 games for the 1970's Bills gets you a lot of respect (from me at least) and hey, if you loose it one night while going over to your old lady's crash pad to scare the shit out of that young car park who's been banging her and driving that red Ferrari YOU bought her around like he owns the damn thing and instead of whimpering away he's dumb enough to get all in your face about it so you give the punk what he deserves and Nicole comes to the door and gives you that look - that same fucking look she always gives you - that "are you insane' look, like she would even know, and you just snap, stabbing her in the neck and face once, twice, seven times... oh shit, what did I just do? I better get out of here. Watch all the documentary films on the subject you want but that's how it went down. Everyone was guilty.

You don't like it - think I'm being cruel and cold hearted? I was hanging out in my apartment on CPW - 17th floor with a beautiful terrace looking north on the day the verdict came down and I heard the screams of joy and cheers wafting down from the projects on 95th street. A lot of scores were settled that day and all Johnnie Cochran had to do was make sure he got some lovin' black mothers on the jury to render justice. Not good enough for the Brown/Goldman families so they put a $30M noose around O. J.'s neck using civil litigation but there was no hangman to pull the trap door so The Juice ran free up until Barack Obama got elected and then, December 2008 to be exact, O. J. got sent to prison on a trumped up kidnapping/armed robbery charge (exactly the kind of unwarranted sentencing FBPOTUS derided) and faded from the public eye waisting away at the Lovelock Correctional Facility in the Nevada sand. There was a new smiling face to represent "Black America" with a sassy (but loyal) wife and two beautiful daughters and the psychic trauma of the Brentwood murders could be safely put behind us. Or so everyone thought, but yesterday it was wall-to-wall O. J. coverage on all the networks just like in days of old or B.O. on the divine timeline. And who among us can judge the truth of it all or render justice at this point? There is one true judge and, try as you might, it's impossible to hide from his all seeing eye or eternal verdict.

The story is not new or incredible or impossible - It's been told a thousand times (more) in every conceivable variation. Some endings are happy and others are sad and some don't have endings at all.