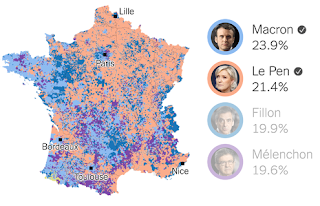 It is my opinion that no nation was more negatively impacted by The Great War (WW1) than France when the flower of French manhood was cut down in brutal trench warfare and the nation never fully recovered from this trauma. The KOTCB blog is a strong supporter of France and its magnificent culture including its storied colonial history. While many Americans think they "get" France it is proven over and over again that even the earnest Francophiles from America don't have the slightest idea why the country is so great. But yesterdays results from the election run-off shows the world the cold hard numbers and who's who in France and what makes the country so special. A 4 way split between Left-Right-Left-Right candidates each getting roughly 20% of the vote leaving that perplexing 20% known as "the undecided" voters controlling the fate of the nation. Eleven candidates enter and two emerge having won the approval of 1 in 5 voters respectively - meaning 60% of the country has to choose someone other than who they wanted to be president. The 20% vs. 20% grudge match needs to convince 51% of the 60% that were shut out that another candidate is the best and so France will finally get its Great Debate after 100 years of confusion, horror and decline. What's it gonna be?
This should be one for the ages and I wouldn't place a bet on either "winner" because the French are inscrutable and almost ludicrously passionate about politics so who knows what they'll think of the debate? As crazy as France is, their socialism kind of works so you can't dismiss Macron even though he doesn't have a real political party or any solid organization backing him. Things are bad in France - the country has been ruled under a State of Emergency order since November 2015 - but if you know the long history of the country it's really not that bad comparatively. And even if it were horribly bad I don't think there's anything in France that's even remotely as bad as what we've got here in États Unis:

So we will see if the blood of the Gauls + Franks + Normands can rise once more in L'Hexagone and resuscitate the heart of Europe or if France will disappear beneath the ocean of history and it's waves of migration? It's a watershed election in that regard and I'll enjoy following it on the evening news. Vive la France! 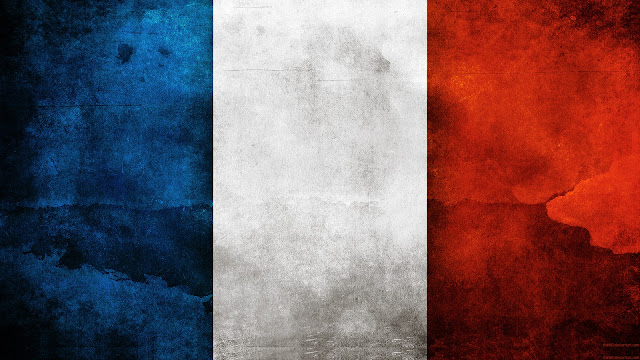 drzurf said…
Look up folks "your redemption drawith nigh."
12:01 AM