Look up in the sky

Many readers might be surprised to learn that New York City is littered with armories and arsenals - not that Manhattan is a City of Military Glory or anything like that but they have built some great military buildings. One of the best, the Seventh Regiment Armory, sits on 4 acres of prime Park Ave. real estates and was built by the swells who populated this famous "champagne unit" who spared no expense on its construction. The Park Avenue Armory, as it is called, hosts many performances and exhibits now but for years it also served as a site for Art & Antique Shows, Antiquarian Book Fairs and the like which I would attend from time to time when I lived in the city. On one of these visits I was milling about the booths checking out priceless knickknacks, lithographic prints and jewelry when one of these UES goofballs decided to engage me in political conversations. The gent was one of those urbane, tightly wound twits commonly found at these events and he started to go on and on about the war in Iraq and how stupid the whole thing was - typical NYC blather which was so familiar in those days 2004-2006. He cocked his head and knowingly said, "I think W got us into war just to avenge the assassination attempt Saddam made on his father when visiting Kuwait ten years ago." Smug smile, bulging eyes, glass clinking ice in his bony grip the guy looked like he had just slammed the door on the entire subject of Iraq by ridiculing the presidents foolish fidelity to his father. "I fucking hope you're right," said I with an insane glee that compelled the chatterbox to take a step back and give me a good long look of shock and awe. I explained myself to his slack-jawed mug pointing out that Saddam Hussein had indeed tried to snuff out a former US President and the only thing Clinton did was launch 23 Tomahawk missiles at a shack in the middle of a Saturday night after warning everyone in country that he was about to pull the trigger. The idea that W. entered the presidential contest, fought his way through the 2000 election controversy and launched a 500,000 man invasion costing $1T and unmentionable atrocities to avenge the honor of his father is an epic justification and very old school. It's as good a reason as any other reason they gave for going into Iraq and at least it's something I can relate to - I'd do the same for my dad. 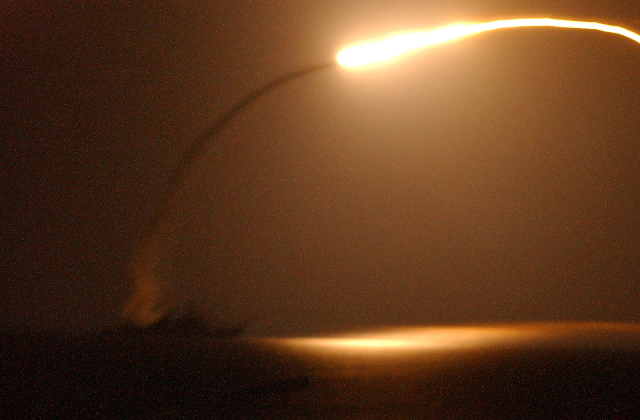 So when when David Ignatius tells me that president Trump launched 60 Tomahawks at a Syrian air base with no warning a few days after Assad dropped some chemicals on "his people" down south because our president couldn't brush off the suffering of children -  I say GOOD.


"When you kill innocent children, innocent babies -- babies! -- little babies, ... that crosses many, many lines. Beyond a red line, many, many lines," Trump said Wednesday, his voice high and stretched, after pictures surfaced of lifeless infants choked to death by poison gas.

You're goddamn right! When you drop WMD's on little babies you should expect ye ol' can of whoop ass shall be cranked open. Was it the Russians or the Syrians? Was it a false flag attack pulled off by ISIS? An evil trick by the Neocons and their CIA villains? Mossad? To quote Her, "At this point what difference does it make?" We're launching Big Time and letting the world know that Daddy's home - shape up. No more gassing babies.
"But... but... we didn't do it! It's not fair."
"I don't care who did it. Don't do it again - look at me - Don't do it again. Do you understand me?"
Shuffling off to their room muttering "It's just not fair."

The Tomahawk Cruise Missile is an interesting bomb in that it flies pretty slow and low and can just circle around for an hour up above your house until its program tells it to swing into your garage door and annihilate the neighborhood. 60 of those bottle rockets streaming slowly across the pitch black sky and then circling above the airport for about half an hour must have made a powerful impression on everyone involved. Probably something they never want to see again.

Now Trump is the king of the swamp - Neocons love him, #NeverTrump loves him, MSNBC loves him, everyone loves him and all he had to do was blow up an airbase - amazing. He turned it all around - no more Russia collusion, no more incompetent clown, no more White House chaos run by incompetent novices. All that's in the past and all they had to do was look up in the sky.