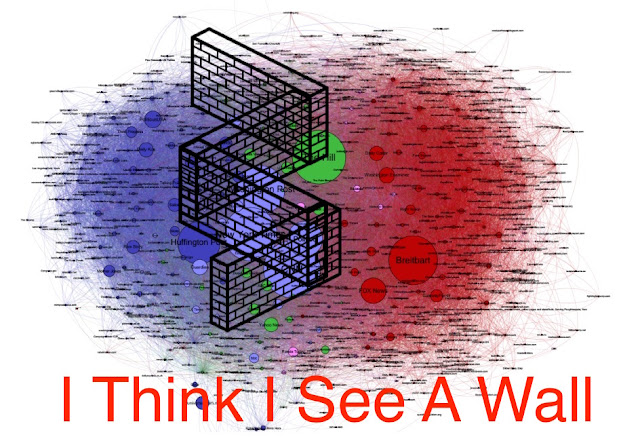 A friend of mine who's banking on an impeachment of Trump to save his day posted a very funny article from the WGBH web site announcing this orthodox "news": "A Major New Study Shows That Political Polarization Is Mainly A Right-Wing Phenomenon." Knock me over with a feather that Government TV can take a CJR report titled "Study: Breitbart-led right-wing media ecosystem altered broader media agenda" and find the "right-wing phenomenon" in it. Not that the study doesn't have something to tell us, but you've got to read between the lines (which WGBH can't do) to figure it out. The mud buckets of vitriol and hate thrown against T-POTUS is shocking and dirty, but very understandable if you stand back and "look at what's going on" as the Elvis from Queens likes to say.

The CJR study, by scholars at the Berkman Klein Center for Internet & Society, at Harvard Law School, and the MIT Center for Civic Media, examined more than 1.25 million articles between April 1, 2015, and Election Day. What they found was that Hillary Clinton supporters shared stories from across a relatively broad political spectrum, including center-right sources such as The Wall Street Journal, mainstream news organizations like the Times and the Post, and partisan liberal sites like The Huffington Post and The Daily Beast.
By contrast, Donald Trump supporters clustered around Breitbart — headed until recently by Stephen Bannon, the hard-right nationalist now ensconced in the White House — and a few like-minded websites such as The Daily Caller, Alex Jones' Infowars, and The Gateway Pundit. Even Fox News was dropped from the favored circle back when it was attacking Trump during the primaries, and only re-entered the fold once it had made its peace with the future president. 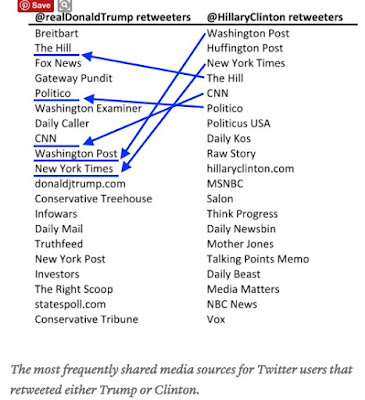 This leads to a horrifying “asymmetrical polarization,” right? Wrong. Because if you actually read the study you'll find inconvenient truths like the chart on the left that show DJT supporters retweeting and sharing all kinds of articles from the HRC side of the media wall, while HRC supporters share nothing from DJT's side. This wasn't “asymmetrical polarization,” it was asymmetrical war and the Trump supporters were taking Hitlery's grenades, dutifully tossed by her MSM supporters, and throwing them right back in her lap. The Clinton people wouldn't touch a Breitbart or Daily Caller story with a ten foot pole but even so the "Breitbart-led sites were able to push the traditional media into focusing on Trump’s favored issue — immigration — and to frame it on their terms: overwrought fears about crime and terrorism." This notion that the NYTimes or WaPo were "pushed" into covering immigration is funny because, as I remember it, the MSM jumped at the opportunity to deep six Trump early on over his immigration policy (especially the wall on our southern border) and pounded him relentlessly in the June-July 2015 time frame assuming that their collective disgust would force him from the GOP primary race. By the time August came around and Trump was still standing and gaining in the polls the press continued to hammer Trump mercilessly on immigration throughout the primaries, at the GOP convention, throughout the general election, after Nov. 8th all through the transition, at the inauguration and for the first 50 days of his presidency - Breitbart didn't have to PUSH them at all and more importantly Breitbart COULDN'T push them because the Alt-Right was on the outside of the Blue Wall getting drenched with boiling oil and pelted with stones. 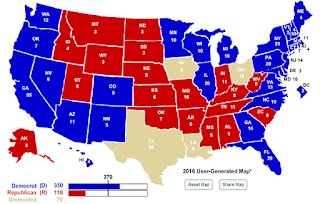 The Blue Wall is not a real wall, but a virtual wall (A Folly Wall) built from ideas and mortared with the blood, sweat and tears of the faithful. Way back in March 2015 plans for the Blue Wall's expansion were underway but by May 2015 (before Trump had officially entered the presidential contest) a smart guy tried to alert everyone to the fact that There Is No ‘Blue Wall’ but that was a time of innocence. By September of that year the "Blue Wall" was very real and daunting because plans for a different kind of "YUGE" wall had been announced on June 16th. By May 2016 it was so real that the ‘Blue Wall’ Gives Donald Trump Little Room for Error and the race was all but over. After November 8th the same guys that had called the race for HRC in May were trying to figure out How Trump Broke the Blue Wall.


The exit polls also show that Trump’s success in these three states was about more than voter frustration with the state of the economy. In fact, Hillary Clinton did better among those who said the economy was “the most important issue facing the country,” than Obama did four years earlier. But, among those who said they wanted to see a president who “can bring change,” Trump crushed Clinton by 68-72 points.

How about that! The whole election pollsters and pundits were asking the wrong questions to the rabble gathered outside the Blue Wall. "Don't you like your $2 gas?" Don't you like your gaming consoles?" Don't you like your opiates?" But they never asked the basic question, "does it get on you nerves that we're telling you how to live your lives and are making choices you vehemently oppose?" This wall of ignorance was much more serious than "political polarization" because it was (is) an honest to God wall of the mind - a wall that prevents politics from happening and the only side that was actually trying to engage in something resembling politics was the Alt-Right fire breathers at Brietbart and it's constellation of like minded insurgents. The news organizations and the people who read them that live behind the Blue Wall are not "polarized" - they are impervious to argument and protected high atop the parapet. Here's an example of what I mean from the WGBH article:


"Then, too, the kinds of people who share stories from Breitbart on social media are politically engaged in ways that the average Trump supporter is not. But never fear: the right-wing media machine is there for them, too. The current issue of the National Enquirer features two front-page photos of Trump and the headlines “How I’m Cleaning Up Obama’s Mess!” and “Amazing Secrets Behind Triumphant Capitol Hill Speech.” (Also: Michael Jackson was murdered.) I would quote from the Trump story, but that would require me to read it."

Well, president Trump "can bring change" and the virtual Blue Wall is tumbling down (including Public Broadcasting) while the real wall is going up on the southern boarder. Maybe the unemployed PBS employees will make time to read that National Enquirer story while they're lounging around the house in their bathrobe.

The Old Wolf said…
Southern border - fixed that for you.

Why in the name of Ella Wheeler Wilcox would anyone point to a National Enquirer article as something that should be read, or mock someone who declined to do so? That rag is only one notch below Breitbart on the reliability scale. It occurs to me that the alt-right is gathering its supporters in the same way that ISIS does, by appealing to the guts and the serotonin of the serially uneducated.
7:49 AM

MrWhiteChocolateChasT said…
This comment has been removed by the author.
9:46 PM