32. We can lead by example again rather than following the script of terrorists & dictators. But only if WE the people lead. #Resist
/Thread
— Beau Willimon (@BeauWillimon) March 17, 2017 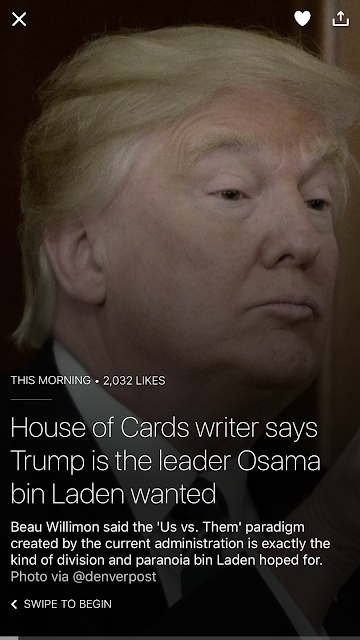 Twitter Moments are like little tweet stories for writers -  when 140 characters just won't do the trick you can create a moment to get your point across and that's what Beau Willimon of House of Cards fame did yesterday. One wonders what Mr. Willimon was trying to "get at" when he tackled the issue of Islamic inspired terror in the TV program he created - at least he stayed away from it in Season 1 or Season 2  - because it would have been the perfect platform to show how "WE" can "lead by example" again like we did for the 16 years of the Bush/Obama era. But his message even then, while the light worker was working his magic, was "WE are the terror" and now he's calling on "WE" the #resist movement to remember that wonderful time. It appears that @BeauWillimon finds Donald J Trump even more terrible than "we are the terror" Frank Underwood and that somehow "WE" (I assume he's talking about We the People) need to find a way back to September 12th 2001 when the world community was feeling sorry for us and the whole nation pulled together to pick ourselves up off the floor. Remember that? And I'm not talking to anyone 20 years old or younger because you won't know what the hell I'm talking about - all you know is arguing and accusation about Islam, the war on terror, who's at fault and all the rest of it - but you oldsters probably remember the national unity, American flags, bi-partisan standing ovations and love of country. Let's put it this way, nobody was kneeling on the sidelines for the singing of the National Anthem in the Autumn of 2001. Young or old you're probably asking yourself, "What did Vladimir Putin and Steve Bannon do to change the national mood of comity and fidelity that's brought us to this perilous place?" In attempting to answer that question I had a little Twitter Moment myself today and I think you should probably read it. It kind of answers all the questions and addresses all the lies that people like Beau Willimon spread from their perch on the jagged mountain of popular culture.