The porpoise is laughing

January 31, 2017
Hey, hey, we are The Monkees
You know we love to please
A manufactured image
With no philosophies.

You say we're manufactured.
To that we all agree.
So make your choice and we'll rejoice
in never being free!

The life of a thespian is difficult and though it comes with benefits like loose women and free libation the constant sense that ones life is, at least in part, under the direction of someone else is an ever present, nagging annoyance. The transposition from the actual person you are to the role of the character you're playing causes confusion in the mind and spirit. In the age of recorded media and  mass communication this transposition carries a quality of permanence unknown in any previous era and the actor discovers that he's been transformed from a person into a product. This stasis is especially hard on musicians, captured as they are on vinyl, magnetic tape, CDs and digital files or even more confining celluloid and video tape. When an actor finds himself (or a likeness of himself) trapped in this netherworld the suicidal impulse grows strong.


When asked by Rolling Stone magazine in March 2012 if he thought making Head was a mistake, Nesmith responded by saying that "by the time Head came out the Monkees were a pariah. There was no confusion about this. We were on the cosine of the line of approbation, from acceptance to rejection . . . and it was basically over. Head was a swan song." 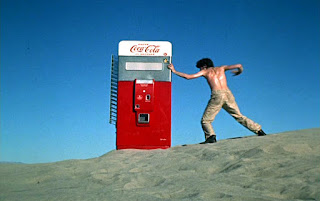 Head (the movie) is an exposition of how the thespian feels when he learns the machine has run out of sugar-water. Anger, disillusionment, confusion all come crashing down as he searches for some way to cope and "move on" with a life that can't move. He's frozen and he knows it's over - time for the swan song before he gets the hook stage left. First he'll punch the machine, then punch some people in the face but eventually he'll fall exhausted to the floor and weep.


There are those who claim that Senator Schumer's tears were those of a clown in full fledged performance mode. Just made up and coached to illicit sympathy from the viewing audience as it certainly did from the reporters covering the staged event. I disagree - the tears were real, but I don't think they fell on account of Syrian refugees or anyone other than the Senator himself because like any monkey he can see that he, and the political party he leads, is entering the downward drift of a political cosine. Their days of glory and leadership - an 80 year run - came to an end last November and like an aging pop star he can't free himself from what was captured so long ago. Starting with the inauguration of DJT and with each passing day of popular executive orders, stellar cabinet appointments and business like action and competence the new president is crushing the Democrat party. The Democrats have no way of stopping it:

My fellow members of the Judiciary Committee and I are ready to get to work to get Judge Gorsuch confirmed. pic.twitter.com/MnHZWYouSA
— Mike Lee (@SenMikeLee) February 1, 2017

He knows the terrible circumstance he's in and how meaningless the protests, Senate obstructionism, Justice Dept. grandstanding and other stunts will be in stopping the Trump agenda. His voters are running through the streets like lunatics and the government he has devoted his life to - "his government" - has just jumped off the bridge to the 21st Century - goodbye, goodbye, goodbye.