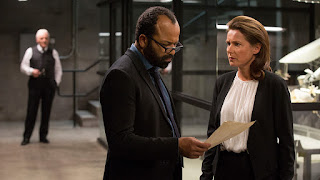 Suspension of disbelief is a critical and mysterious quality of human consciousness required to fallow any story be it told around the campfire, in a novel or on the LCD screen. It is demanded in spades by the creators and writers of HBO's West World which portrays a world of the machine in all its post-modern glory and focuses, ironically on the subject of self-awareness. It's heady stuff and the show has a great production budget and very good acting to, like the theme park it documents, bring it all to life. I couldn't help thinking about the show and it's hapless "hosts" when Kanye West dropped by Trumps keep in midtown Manhattan this morning:


“We’ve been friends for a long time,” Mr. Trump told reporters. Asked what he and Mr. West talked about, he responded: “Life. We discussed life.”

Hmmm... Sounds very suspicious. Especially since Kanye just stood there, motionless, in shut down mode. When Kanye flipped out a few weeks ago and started ranting and raving at his concerts I initially suspected that it resulted from the deleterious effects of close proximity to the Kardashian project (God knows it has brought down other good men) but I've come to realize that it was Trump shock and freak'n self awareness that turned one of the greatest rap artists of all time into a blabbering lunatic.

Here is a meeting between Dr. Ford (Trump), Theresa (Hitlery) and Arnold/Bernard (Kanye) that perfectly sums up the 2016 election - watch:


Trump: "They cannot see the things that will hurt them... In a way their existence is purer that ours."
Hitlery: "You're a fucking monster."
Trump: "Am I?... You're the one who would destroy them and the intimacies were your idea."
Kanye: "I'm not one, I can't be. Kim. North. Saint."
Trump: "Shut down Kanye. You see, I do it all for the nooky. We have spared them feelings of anxiety, self-loathing and guilt. The Kanye's of this world are free - free under my control."


What did these two old friends talk about up in the TT this morning? It probably went something like this: