"Society had its chance"

I frigg'n hate Twitter. For years the company I worked for begged me to use it to promote products, innovations and success stories to the broader tweeting public but I just couldn't bring myself to do it. It just seemed like an endless stream of one liners with incongruous patterns building a formidable wall of confusion. Then the 2016 election happened and I had to start using the cursed platform to follow Trump to figure out what he was doing - now that was fun because Trump actually understands how to use the service and does use it to great effect as his own printing press - like this:


ISIS is taking credit for the terrible stabbing attack at Ohio State University by a Somali refugee who should not have been in our country.
— Donald J. Trump (@realDonaldTrump) November 30, 2016 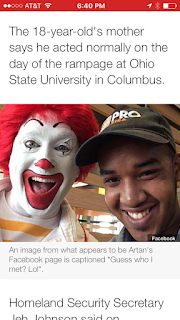 Impressive. Complete freak out by all the good people bringing Somali refugees into America and relocating them in the heartland (Ohio) where they get educated and, basically, act like any other millennial in American society - except the jihadi stuff but you really never know about that side of them until they go boom. And that last part is a real problem for those of us non-Islamic nut jobs (including Muslims) who inhabit the land of the free because for all the ISIS inspiration the perps of these terrorists attack "act normally" to anyone observing them. How do you deport a normal person? How do you even vet these people or "extreme vet" them? And even if you do vet them and they pass inspection there's always the chance that they'll come to America and be taught to hate the country as much as some of the native born citizens do. The difference between these Somali haters and your average college student, journalist or movie star is that the Islamonazi has a very compelling rational to act - a cause for lack of a better word and that cause is A LOT more meaningful than giving Bernie Sanders all your (and other people's) money to spend on his pet projects. They see American society with it's strip malls and golden arches as, well, as ISIS sees it - something that needs to be destroyed. 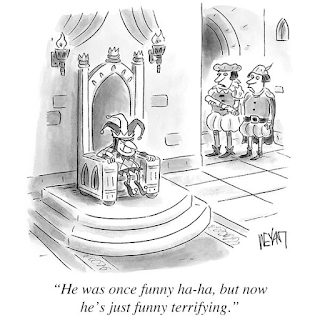 There's always the chance that this mass murder attempt (Abdul Razak Ali Artan's attack did not go as planned) had something to do with murder microbes in the Ohio water supply for it must be remembered that one of the most notorious mass murder nut jobs in American history, James Huberty, was an Ohio native and though he lived a violent and tortured life in the Buckeye State, he didn't snap until after he'd emigrated, so to speak, to Southern California. One sunny San Ysidro afternoon in 1984 he walked out his front door loaded down with weaponry and told his wife that he was "hunting humans" because "society had its chance." His long suffering wife didn't think much of it at that moment but 20 minutes later, and for the following hour, James methodically killed over twenty men, women and children (most of them Mexican-American) in the local McDonald's fast food joint. No way to keep the James Huberty's of America out of America, but there is a way to keep the Abdul Artan's of Somalia out of America - Society had its chance and society blew it. That is the 2016 election message and America is determined to stop blowing it and start winning instead.