November 25, 2016
I believe in world peace just like the next guy, but sometimes this otherwise pleasant sentiment is taken too far. This is especially true when it comes to rock n' roll and football so when I sipped my coffee this morning and THIS abomination of a TV commercial assaulted my consciousness I damn near spit my java all over the breakfast table.
I was still smarting from the Thanksgiving day spanking the hated Cowpokes had administered to the valiant and noble (and historic) football franchise representing Gen. George Washington so I was in no mood to make peace. But that's not the only reason to hate this commercial. I'm assuming that the scene takes place in suburban Washington because there are no garbage men in Dallas who wear a Redskins cap so the mother and son are basically living in hostile territory and decide to flaunt their apostasy for all to see - parading around with a blue and white pentagram on their hat. The poor guy who picks up their trash - not an easy or pleasant job - has to suffer the double indignity of getting a gift left on top of said trash and upon opening it finding an hat with the logo of his arch rival team on it. This is not a gift of love or appreciation but a gift of hate - we're giving you a hat that you would never ever buy in a million years and can't even imagine wearing but here you go. So what now? 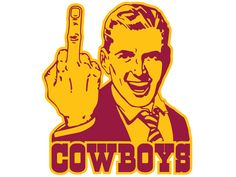 This is where, in reality, the garbage man stuffs the hat deep in the trash can and gives the finger to mom. Some things are not funny or cute and junior would receive a powerful life lesson while his mother scurries him into the house shaking her head. Unfortunately, they never play it straight in TV advertising so the poor schlub puts the hat on his head (absolutely impossible to conceive of this actually happening but this is TV where every conflict is resolved so...) and then puts his beloved Redskins hat atop the Dallas lid. Again, in real life, this is the moment that his head would explode in a fireball of shame ripping a hole in space-time and sucking everyone involved down to the bowels of hell.

All of this being true I have to ask - what was JC Penny thinking when they made this advertisement? How did the NFL and the respective teams allow this ad agency to use the Redskins and Cowboy logos? What the hell is going on in this country? No wonder Trump won the election - if this is what the other side considers "good" then I'll take bad ever damn day. Hail to the Redskins you soulless, passionless Madison Ave. robots - get real and stop spraying America with this feel good goop.