June 25, 2014
There's been a lot of hand wringing over the Washington DC football team's mascot with the latest salvo fired by the US Patent office in rescinding the Redskins trademark on the grounds that it's name is a "racial slur". Fair enough, and hard to argue that the term "redskin" is NOT racially insensitive and down right xenophobic in it's intended usage and historical meaning. Why even argue the point by sighting polls that highlight the overwhelming support the masses have for keeping the Washington football team named the Redskins - the name is a racial slur. Period. Pointing the finger at other sports teams and claiming that Redskin is no worse than Indian or Blackhawk of Viking is also a loosing argument because it obviously is false. Buying off the "native american" tribes isn't going to work either because most Indians don't give a rats ass about the name and giving jobs and opportunity to the tribes through a private foundation just infuriates the PC Leftists who believe that help should come from Government and are the real driving force behind the name change movement. The only honest option for the team is to say, "yes, Redskin is racially insensitive slur and we're OK with that" or to change the name. Option 1 is never going to happen so we're faced with option 2...

Over the years there have been no shortage of proposed name changes:


But none of these ideas either break with tradition in a fundamental way or take into account the rich and storied history of the franchise or the realities of todays fan base who all love the Redskins as is. The Redskins are not some expansion team or even an AFL younger brother allowed into the clubhouse in the early 60's. The Redskins are the real deal - NFL originals and you've got to take their legacy into account when you mess with something as big as the teams identity. I therefor humbly submit two possible name changes - one that breaks with past in an irrevocable way that gives the team an exciting (if admittedly dystopian) future and the other that honors the true history of this great NFL franchise. 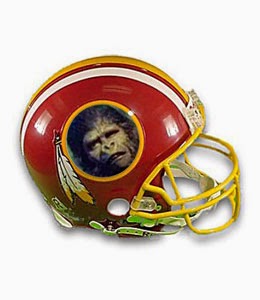 Most Americans don't know it, but the Redskins don't actually play football in Washington DC - they play their games in Raljon, MD which is located, fittingly enough, in the middle of ex-urbia sprawl that is home to so much of the teams fan base. In truth, the Raljon location is even more mystical because though the team was moved there in 1997 from RFK Stadium in Washington DC, the name Raljon has now disappeared from the public recored - it truly is a utopia.
The Damn Dirty Apes is, of course, a reference to the classic 1968 film Planet of the Apes and Charlton Heston's shocking retort to his captors. I think the Apes or the "Damn Dirty's" captures the spirit of the modern game and gives former Redskins fans something to cheer about. The color commentary by Chris Collinsworth alone validates the possibilities of this new mascot: 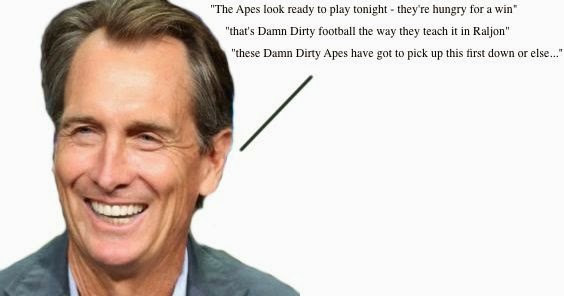 At this point the more sensitive readers will be thinking, "but isn't this jumping from the frying pan into the fire" by discarding one racist moniker, Redskins, for a different but equally suspect name - the Damn Dirty Apes. Well, who's the racist? There's nothing racially insensitive about the Ape - a nobel creature and almost human, fierce, intelligent and playful - and scary as shit when he gets around your left guard and is making a bee line toward your QB. It really is the hight of speciesist hatred to NOT name a team after our closest genetic relative so spare me the "racially insensitive" banter. The Raljon Damn Dirty Apes is the perfect name for a 21st Century football team and I support the Hope and Change that comes along with it - look to the future and you'll see a washed up Statue of Liberty with a weeping Moses kneeling in the sand and asking "why"? 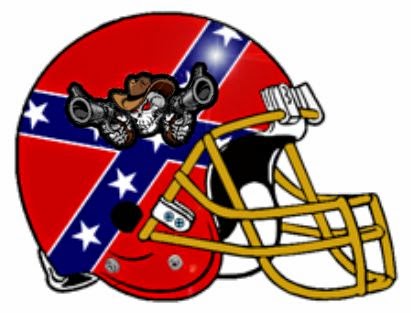 As a historical matter the Washington Redskins were, for the first half of their history Dixie's team being the southern most franchise in the NFL. Today's fan map shows a diminished fan base, but still a heavy draw from the south. Owner George Preston Marshall was a New Deal segregationist and actively marketed the team to the southern states, recruiting southern college stars, forming the Redskins marching band and fight song - in the '50's he even built a TV network across the South to broadcast Redskins games. This is why the Redskins were the last segregated NFL team and did not field a negro player until 1962 - the fan base was (is?) fundamentally racist. That's not to say that a lot hasn't changed since 1962 and some of the greatest Redskin heroes are Afto-American superstars, but it's still a southern team.
In that spirit I propose the team be named The Washington Rednecks thereby keeping most of the existing name and championing the teams most enthusiastic fans. It's true that Redneck is probably as much of a pejorative as Redskin, but rednecks don't seem to mind the name and, more importantly, white liberal sensibilities are not troubled by the term. I suggest a Stars & Bars helmet design (heritage not hate) and some crazy assed cracker holding guns as the mascot. This maintains the sense of menace conveyed by the Redskins mascot but brings a modern sensibility to the image that almost everyone can relate to.

Change is never easy, but Redskins fans need to look at what's possible and find the good in this heartbreaking situation. The PC ninnies will never back down - it's a moral issue for them and the weight of the big money world is standing solidly behind them. The current owner of the team is a stubby fingered tyrant who, for all his many faults, truly loves the Redskins and their market valuation - so he will never back down (until he does). So how do we sew a silk purse from a pigs ear? Go Hogs!!!