Tear the totem pole down 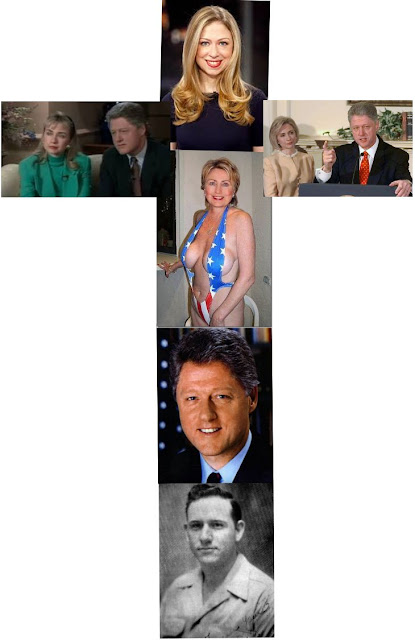 Back in the early 90's (and over the ensuing decades) I've had many heated arguments with people over the character and leadership qualities of William Jefferson Blythe III. Though Bill never knew his biological father who drowned in a puddle of water after a mysterious car accident a few months after conception but a few month before birth (that awful period when a woman must decide weather she wants to bring the child into the world or have the fetes extracted from her belly) it is safe to say that the apple did not fall far from the tree. W.J.B.Jr. was a ramblin' man who in the course of his 36 years of life was able to marry 4 times (including sisters) and sire 3 children in various modes of domestic status. The fact that our 42nd president carried his name until the age of 16 is no small matter and the attempt at liberation he chose by adopting the name of his step-father did not alter the color of his character - the die was cast.


"He met my mother at Tri-State Hospital in Shreveport, Louisiana, in 1943, when she was training to be a nurse. He brought a date with some kind of medical emergency into the ward where she was working, and they flirted while the other woman was being treated. The next day he sent the other woman flowers and Mother's heart sank. Then he called Mother for a date, explaining that he always sent flowers when he ended a relationship. Two months later, they were married and he was off to war."

What a guy! So when Bill Clinton tells his supporters, “You know, I’m basically your standard redneck” he's telling a kind of truth. "Standard" being to operative word for those who suffer from implicit bias and, you know, understand exactly what he means which many of my "liberal" Democrat friends do. And that's the basic bone of contention I fight over because "standard redneck" doesn't do the man justice and while it satisfies the prejudices of those Americans who live outside the South (because they're ignorant) it rankles those of us who grew up in Dixie and know a flimflam man when we see one. The fact that this artful dodger was elected president, remained relevant on the world stage and is now seeking a third term in the White House represents a cultural and constitutional crisis of the first order. To explain why we need to put his redneck comments in context.

This puts the "redneck" self assessment "in full context" as they say. This guy (and his gal) don't want Americans to move up and they hate the idea that anyone's above them looking down on their tawdry, licentious morality and shameless graft. They want to tear down the social order so everyone's on the same level (everyone but them that is) and then, out of the rubble we can ALL march into the glorious future "together." This is southern liberal nihilism fueled by a primal hate sprung from a subconscious insecurity and fear. When harnessed it is a toxic poison that transforms humans to zombies and, as history shows, twists many great civilizations into evil tyrannies.

It brings to mind an insightful vignette from H Allen Smith's popular memoir "Low Man on a Totem Pole" - Chapter 1 "How I became a journalist" which recounts his first newspaper assignments one of which was to write obituaries. This required making the rounds to each of the towns three mortuaries one of which was owned and operated by the aptly named Joe Poore.


"Before long I had even become a sort of helper to Joe, running the pump, handing him his tools and listening to his wonderful conversations with the dead. He knew everybody in the county and he loved to talk to them as he prepared them for the tomb.
"Bill," he would say to a corpse, "you never got it, did you? Never got all that money. That dirty son-of-a-bitch wife of yourn, she'll get it now, won't she, Bill?"
I learned a lot about people in that little room.
Joe Poore was a rabid Democrat, and it was a lovely experience to attend the embalming of a lifelong Republican at his hands. Contemplating an over-dormant Republican, Joe achieved oratorical heights not equaled even on the floor of the United States Senate. His cussing was impure beauty. I choose to let your imagination consider it..."

Using my "imagination" I can see a fat wheezing Democrat desecrating the lifeless body of some families loved one - shouting curses into the husbands deaf ears, gesturing obscenities to the fathers blind eyes, squeezing his brothers cold hand and gloating over his position on the totem pole.