A Lesun for us all - Citius, Altius, Fortius

Like most things, when the money goes in, the sport goes out and this is certainly true of the Modern Olympic Games. Not that I object to the games in principal - the idea of bringing the worlds nations together in a celebration of sport and peaceful competition is probably a good thing and, aside from the pagan heritage that obfuscates deity, celebrates nationalism and sets man on a pedestal with a precious metal sphere hung around his neck, it's probably a good thing. That's not to say that I wouldn't make improvements (if I could) starting with nocking down the number of days the Olympic Games are played - my number would be 5 a symbolic representation of man alluded to by the modern flag of 5 rings. To accomplish this compression of the Olympic schedule many sports would need to be cut from the list of events. This pruning would require the removal of all team sports (except rowing), all racquet sports, most gymnastics (including Trampoline which is awesome but doesn't belong) and sailing. Nothing against badminton or team handball - they're great sports - but they just don't belong in the Olympic games any more than Death Frisbee Soccer does... hmm, actually, maybe DFS does... anyway, get it down to an athlete (singular) competing against other athletes in specific games of strength, endurance and skill.

The biking, shooting, gymnastics, rowing and equestrian stuff should occupy day 1 and 2, then move to the track/pool for day 3 with the sprints and swimming and by day 4 and 5 the important contests would get total focus - those sports being the Triathlon, Modern Pentathlon and Decathlon. 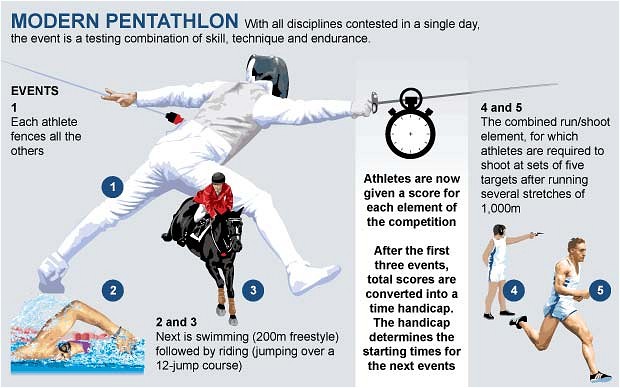 The most important of these, IMHO, is the Modern Pentathlon which was introduced to the Olympics by the magnificent Baron de Coubertin in the early 20th Century. The Baron was a student of history and believed the Pentathlon should be the ultimate test of chivalry and manhood that exemplifies the Olympic spirit. This years champion, Aleksander Lesun, is an extraordinary athlete from Belarus who represents Russia in the event. Lesun set an Olympic Record in his winning effort and one thing's for sure - come the Zombie Apocalypse, this dude is going to survive. When whatever it is that's coming after him gets close Lesun can jump on almost any beast of burden and ride it until it collapses from exhaustion or meets an impassable obstacle - say, a raging river - which is no problem because Lesun can swim across it. If the creature, in it's bloodthirsty determination, finds an alternate way over the river Lesun can hoof it on his own and pretty damn fast too considering he's also turning and firing bulls-eyes with his pistol. He'll sprint and shoot for a half mile (maybe a little more) but if he can't outrun the beast in that distance he'll stop and fight with sword or stick (whatever's at hand) and kill it up close and personal because Lesun is at his most dangerous with a rapier in his hand.

Yes, citizens of the world - this is the person we should be honoring and discussing far and wide - Top of the food chain, heroic effort, fortitude and courage. Even though NBC Sports is obsessed with US swimmer Ryan Lochte and his Rio robbery,  here at the KOTCB blog we focus on the real story and salute Aleksander Lesun and his noble achievement.