God knows what breeze blew it along
Or how and why its seed found purchase
But there it stands alone, tall and proud
Not the tallest I've seen but it shines all the same 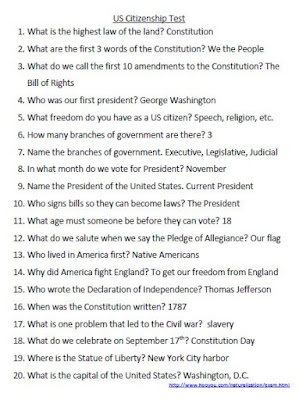 Two of my friends became new US citizens this morning - one from Ireland the other from India - and I saw the former Irishman after confirmation at lunchtime and asked him how it went. "Great, 74 people form 41 countries of origin all new US citizens - they even took away my green card", he said. I asked him if he had to take a written test and he informed me that applicants for citizenship don't do written tests anymore but instead each person has a personal interview with a DHS agent who quizzes them with questions like, "are you a terrorist?" or "have you ever transported explosive material for a terrorist organization?" and according to the Feds it's amazing how many terrorists answer truthfully. Still a good idea to know the answers to a US Citizenship test evan if you don't need to use them.

I'm not sure of all the questions I'd have on my Citizenship test, but something about the Jefferson Airplane and their song Volunteers would defiantly be among the 100 because I think it captures the essence of July 4th and the spirit of independence that's been lost in our DHS new order.

May the revolution live on - forever and ever more.